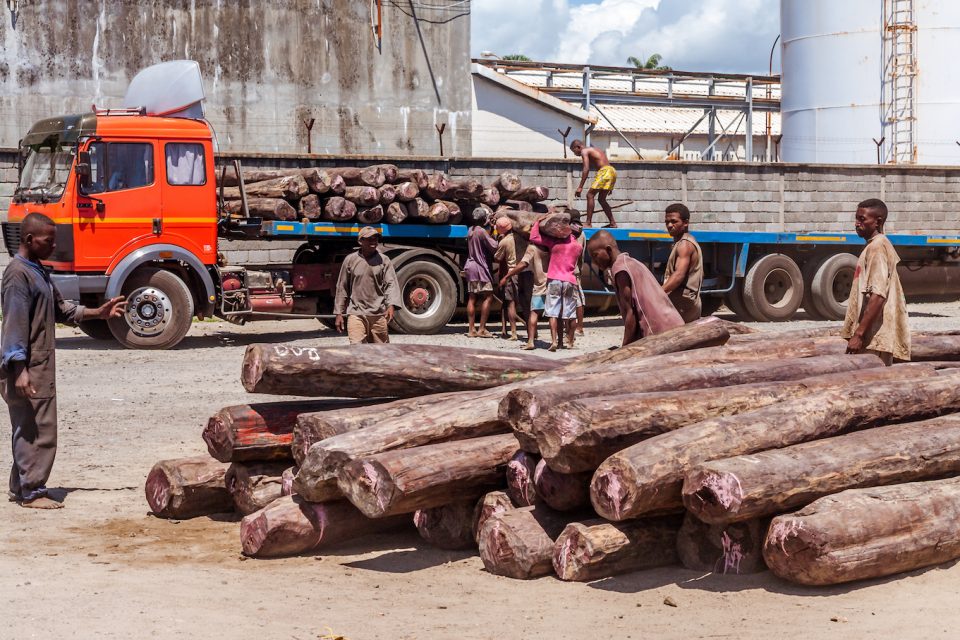 Madagascar’s forests are beautiful but embattled.  Humans arrived on Madagascar, the world’s fourth largest island, for the first time only about 2,000 years ago.  Since the arrival of humans the island, home to unique and strange wildlife, has changed radically. Giant flightless elephant birds went extinct, most likely due to hunting.

Wild Madagascar reports that many wild animals that died off after human contact went extinct for a number of reasons, but many of them directly related to people.  Animals that are now extinct include 15 species of lemurs, giant tortoises and hippos. One of the contributing factors to the extinction of these animals is deforestation.

Portrayals of the island in films like the cartoon Madagascar often grossly misrepresent it as little more than a paradisiacal, wild jungle.  Instead, the island is a complex landscape comprised of various habitats, all threatened by humans and our desire to extract as much as possible from forests.  Madagascar has lost 80% of its original forest.

If you drive south from Antananarivo, the extent of the destruction is obvious.  Only after most of two days of riding on public transportation do you see a break in the wall of humanity and a glimpse of the wild forest for which the island is known.  Slash and burn agriculture locally known as ‘tavy’ is common in Madagascar. In some places you can stand on a hill top and watch a piece of forest burning somewhere below almost every night.

Madagascar’s forests are also incredibly stunning.  Little fragments are protected by being located in close proximity of tombs, which imbue the surrounding woods with their sanctity by local customs.  Other fragments of forest are protected by law as parks. Shade grown coffee plantations give imperfect but useful habitat to some species. Mongabay reports that in the habitat that remains, there are at least 10,000 species of trees and shrubs, 90% of which are found nowhere else on earth besides Madagascar.

The trees and other plants that make up the forests of Madagascar also support impressive wildlife.  All of the world’s lemurs are native to Madagascar and more species of chameleon are found on the island than anywhere else.  It’s not surprising that some of the trees found in Madagascar, despite their place in the ecosystem, have a high value for lumber.

Rosewood, a member of the Dalbergia family, is a slow growing tree found in Madagascar.  The wood is red and fragrant, used often to create high end furniture. The trees are also protected by international law from being collected in the wild in Madagascar where the harvest is unsustainable.  Unfortunately, like many parts of Madagascar, there is a shortage of jobs in many of the areas where rosewood grows. The Organized Crime and Corruption Reporting Project (OCCRP) reports that a former rosewood logger made between $2 and $3 felling two trees a day.  This number seems pitifully low, but $5 a day is often considered a fair wage in Madagascar.

Most loggers paid low wages never meet those financing their operations who can sell rosewood for as much as $20,000 to $25,000 per ton.  It’s estimated that in 2013, $250 million to $300 million in illegal lumber, mainly rosewood, was exported from Madagascar. Although logging and exporting rosewood is illegal, government corruption and involvement of officials in the trade keeps enforcement of such laws low.  And it isn’t only in Madagascar that the illegal trade gets a pass either.

Much of the rosewood poached in Madagascar is exported to China or other friendly locations where it is made into furniture to be sold for high prices.

Mongabay reported in 2014 that Singapore authorities captured 29,000 illegal rosewood logs equally about 3,000 tons.  The logs were imported from Madagascar by a business man Wong Wee Keong and his Singapore-based company, Kong Hoo.  The logs were part of a stockpile created by a surge in illegal logging that took advantage of a 2009 coup in Madagascar.  Some of the logs showed signs of being previously seized by the Malagasy government, suggesting the involvement of government officials from Madagascar.  This was the largest bust in rosewood and perhaps the largest intercepted illegal shipment of a protected species to date.

Wong Wee Keong’s trial took many turns.  In 2015, the court found there was a lack of evidence and acquitted the business man.  After other court hearings, Wong Wee Kong was fined S$500,000 and sentenced to three months jail time.  The company, Kong Hoo, was fined an additional S$500,000 and the logs were considered forfeit property, Today reported.  Unfortunately, this wasn’t the end to the trial.

A higher court issued a ruling on April 8 of this year, Mongabay reports, that reversed the earlier verdict and sentencing.  Wong Wee Keong and his company have been acquitted of all crimes and the logs have been ordered returned as soon as practicable.  It may take some time for the logs to be returned as the Singapore government will have to pay a hefty fee for their storage. There is a chance that the logs won’t be returned yet due to ongoing legal proceedings, but it’s unlikely.

Madagascar failed to prove in court that it was illegal for the logs to be exported from Madagascar.  Initially, a fake document was verified as a permit for exporting the logs and by the time a correction was made, the Singapore court was ignoring documents from Madagascar.  Instead, the ruling was based on whether it was legal to import the logs into Singapore rather than illegal to export them from Madagascar.

The case brings up questions as to whether international agreements to protect species have any real strength.  The logs must still be exported for a profit to be turned on them but it’s likely that in small shipments to China, the logs will slowly be turned into furniture and money.  Meanwhile Madagascar’s forest goes away one tree at a time.