Puffins are making a comeback, according to latest numbers • Earth.com 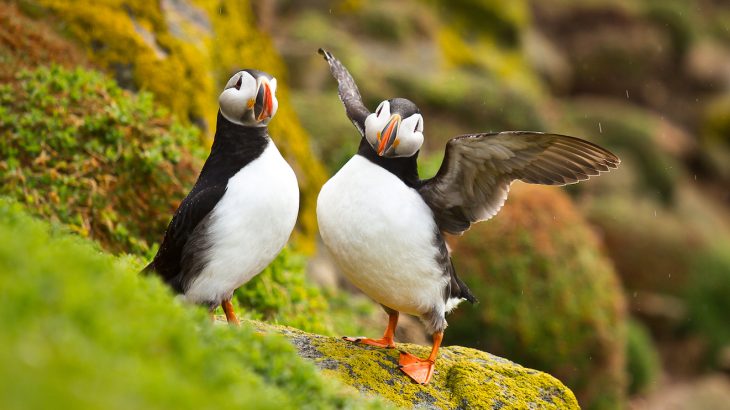 Puffins are making a comeback, according to latest numbers

Word that the puffin population has increased is especially welcome news after it was reported in May 2018 that the numbers were down by 12 percent due to last February’s “Beast from the East,” a bitter cold wave that impacted Great Britain and Ireland.

The cold along with lack of food prompted fears that the puffins were quickly declining. However, much of the population had moved to the inner islands because of a rise in grey seals on the outer Farne Islands.

The rising seal populations not only led to more competition for resources, but the National Trust also reports that the seals were unknowingly crushing puffin burrows.

Puffins build nests in burrows underground. To survey the puffins on the islands, rangers monitored burrows for puffin activity like footprints or puffins bringing back food to the burrows.

The final survey numbers showed 43,956 pairs of puffins in total which amounts to a nine percent increase from the last survey in 2013.

“When we started the count in the outer group of islands we were very anxious that numbers were down, especially as we know puffins are struggling for survival across the globe,” said Thomas Hendry, a ranger with the National Trust. “After further investigations on the inner group of islands, numbers seemed to be much more positive. This could be due to the islands being more sheltered, providing an ideal habitat for the puffins to successfully breed and raise their young.”

The rise in puffin numbers on the Farne Islands indicates that the population is stable, but continued monitoring is crucial.

The National Trust plans to conduct a survey count of the Farne puffins every year instead of every five years, which will help provide a more accurate picture of how the puffins are adapting to climate change and other threats like plastic pollution.

“Annual monitoring may help us track numbers against likely causes of population change, whether that’s changes in frequency of storms and summer rainfall as a result of climate change, changes in the sand eel population or something else altogether,” said Harriet Reid, a National Trust ranger.