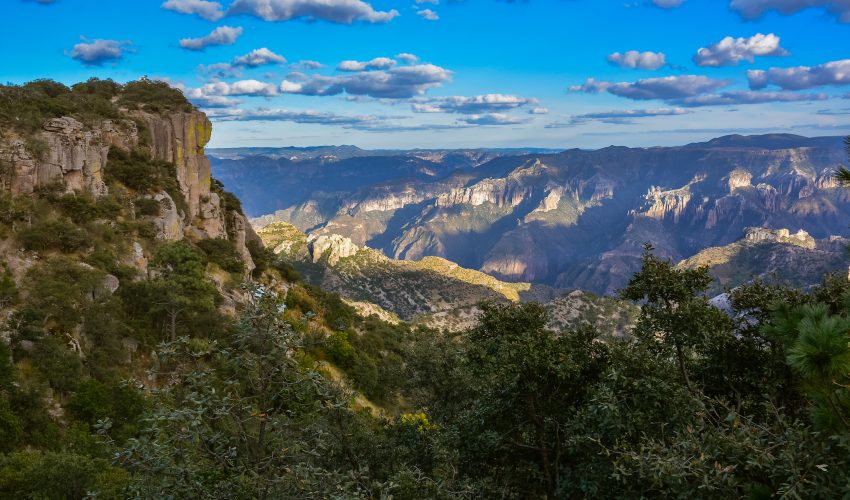 The Copper Canyon region of Chihuahua, Mexico is steeped in legends and mystery.  The area is known for the Rarámuri, a group of indigenous people also known incorrectly as the Tarahumara (Rarámuri means “People of the swiftly running feet”).  The name Tarahumara was given by the Spanish, whose conquistadors never conquered the Rarámuri and whose Jesuits never fully converted them.

I first learned about the Rarámuri through the book Born to Run by Christopher McDougall, which details their culture of distance running.  The Rarámuri were also the first people to eat the now popular ‘super food’ Chia seeds.  Driving through the country around the town of Creel, Chihuahua, you can see women in brightly colored traditional dresses herding goats or men walking along the road in cowboy hats, western shirts and jeans but also wearing traditional Rarámuri sandals soled with used tires.

Many of the Rarámuri still move with their livestock from summer to winter pastures, and many of them live in traditional cave/cliff dwellings as they have since pre-Columbian times.  That said, there are obvious modernizations, and riding our bikes past the Rarámuri cabins, we spotted satellite dishes and power lines running to houses.

All told, the Barranca del Cobre (Copper Canyon) region is a system of six separate canyons in a canyon system that all together dwarfs the more famous Grand Canyon of Arizona.  The Grand Canyon is still bigger than any of the individual canyons alone, but the canyon region makes up almost a third of Chihuahua, Mexico’s largest state at 25,000 square miles.

The first place we stopped to visit in the Sierra Madre Occidental range was Parque Nacional Cascada de Basaseachic (Basaseachic Falls National Park).  This is Mexico’s highest year round waterfall, made by the Basaseachic River emptying into Barranca de Candameña (Candameña Canyon). The name ‘Basaseachic’ comes from Rarámuri and means ‘place of the waterfall’ an apt name.  Today, Basaseachic Waterfall National Park is one of the most popular attractions in the state of Chihuahua.

The rock of the area is mainly volcanic andesite and rhyolites ranging from 20 to 140 million years old.  These rocks were forced up and eroded over time, creating a maze of canyons carved by different rivers. The differences in height create different microhabitats as you ascend the mountains or descend the canyons, making the whole area a biodiversity hotspot.  From the Sonoran Desert, the mountains rise creating habitat for Ponderosa, Pino Triste, maple trees collected into forests starkly different from the cacti lands to the west. The bottom of canyons are also more similar to the deserts surrounding the western Sierra Madre, and a rise in elevation as you climb toward the canyon rim mimics an ascent into mountains.

As we were driving from Cascada de Basaseachic towards the town of Creel deeper into the Sierra Madre, we saw the flash of a brightly colored bird crossing the road in front of us.  We saw red, green, a dark brown or black in the feathers. We couldn’t immediately identify the bird but looking it up later, it was unmistakably the Mexican Trogon, (Trogon mexicanus).

The Trogon we saw looks unbelievably exotic, and it is for us in the United States.  The Mexican Trogon as the name implies, is found in the Highlands of Mexico but also at high elevations in Guatemala, Honduras and Nicaragua.  The Trogon is just one of at least three hundred species of birds found in the Copper Canyon region. Along with the exotic Trogon, we’ve also seen the common American Robin, (Turdus migratorius) flying near Violet Crowned hummingbirds, (Amazilia violiceps).  The bizarre mix of northern, southern, low and high elevation biology is best summed up by the fact that here you can see Thick-Billed Parrots (Rhynchopsitta pachyrhyncha) nesting in Quaking Aspen trees that you can also find in the mountains of Colorado.  The Thick-Billed Parrot is the only parrot native to North America to survive extinction and once also lived in Arizona and New Mexico.  Reintroductions of the Thick-Billed Parrot into Arizona in the 1980s failed, due to predation from raptors.

Near Creel we visited Valle de los Monjes (Valley of the Monks), which is perhaps more fairly known by the name the Rarámuri gave it, Valle Bisabirachi (Valley of the erect penises).  The valley is filled with strange towering monoliths of stone. There are differing legends connecting to the valley and its odd rock towers, some say that the stones are monks petrified after long meditation.  Others say the phallic shapes of the stones grant fertility or that the stones are the forms of sleeping pagan gods. The interesting rock formations are actually made from tuff. Tuff is a stone formed by volcanic ash, in Valle Bisabirachi the ash settled and hardened into rock that was then shaped and weathered through time into fantastical shapes.  The rocks here emphasize the volcanic history of the western Sierra Madre, that the whole area is in fact a volcanic plateau. Walking through the valley I saw bolts for climbing routes, both sport routes and top roping anchors, and it made me wish I had climbing gear with me.

We camped for days near Lake Arareco, where you pay only a small entrance fee for multiple day camping.  From the lake it’s a short trip to visit different valleys, a waterfall or just explore the forest. The forest in this area is classified as Sierra Madre Occidental Pine-Oak forest.  At the elevation around the lake it’s primarily a pine forest, if we dropped down in elevation the forest would change becoming more of an oak dominated grassland.

So far, ecotourism has all the appearances of working well for the Rarámuri of the area; locals collect fees to camp by the lake or enter valleys.  In the town of Creel there are guides for any conceivable outdoor activity from riding horses to biking or hiking and there are plenty of shops selling local artisans wares.

There are also small signs of future conflicts. For rent in Creel are ATVs and SUVs, vehicles that don’t always do so well sharing the roads with mountain bikers or indigenous trail runners.  The ancient Sierra Madre Occidental of legend is slowly meeting the realities of the 21st century, and it’s unsure what that means yet.