Rare angel sharks spotted off the coast of Wales • Earth.com 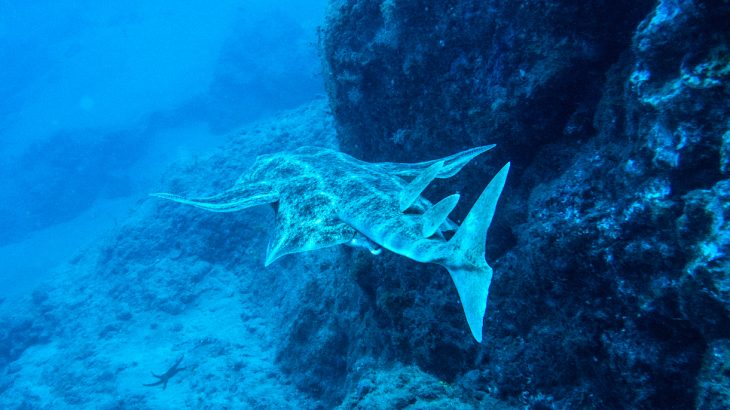 Rare angel sharks spotted off the coast of Wales

There have been several reported sightings of a rare and ancient species of shark off the coast of Wales in recent years, and now zoologists are hopeful that area represents a new key habitat for the elusive angel shark.

The angel shark is a type of flat-bodied shark that has evolved very little from its ancient ancestors, and after hunting and pollution nearly drove it to extinction, the only known habitat of the sharks has been the Canary Islands.

According to the BBC which reported on the new sightings, the Canary Islands are the angel sharks only stronghold.

Reports from fisherman have led zoologists to believe that the seabed off the coast of Wales may be another important habitat for the sharks and that there may be more populations of angel sharks than previously realized.

The question now remains whether the sharks spotted near Wales are native to those waters or have migrated from the Canary Islands.

“What we really want to try and understand is what sort of numbers are we talking about and where are their important habitats, because there could be some really critical areas for angel sharks in Wales,” Joanna Barker, of the Zoological Society of London (ZSL), told BBC News.

Dives have been planned to study the sharks further, and researchers also hope to analyze genetic swabs taken from the sharks which will help determine if the sharks near Whales are a genetically different population from the angel sharks that live in the Canary Islands.

Barker found archives documenting past sightings of angel sharks in Wales. Because of the shark’s distinct lineage, researchers are especially keen to study and monitor the angel sharks living near Whales.

“If we lose the angel shark, we lose a really important lineage of evolutionary history that we can’t get from any other shark species,” said Barker.