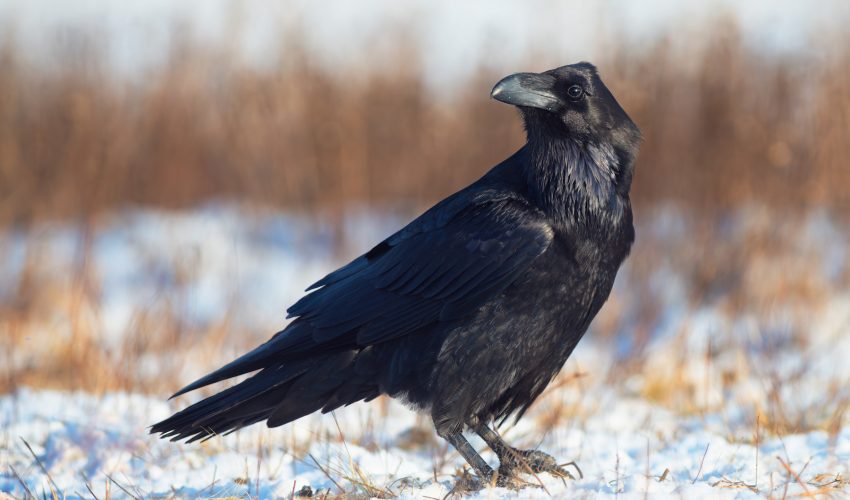 Climbing Mt. Denali, North America’s highest peak, is a daunting endeavor.  The climb takes weeks for most people, and no one can carry all their food and supplies to the top in one go.

In actuality, climbing mountains like Denali is a matter of climbing high on the mountain, creating a food/gear cache, dropping lower to camp and continuing the whole process up the mountain.  Climbers on Denali are warned to bury their food at least a meter deep.  Part of the reason for burying food so deep is ravens.  Ravens on Denali actually recognize flags and wands used to mark a food cache and will dig beneath these markers to find human food.  When you think about it, digging through a meter of snow or almost a meter of snow is quite an endeavor for a bird.

Ravens are part of the family Corvidae, an avian group known for keen intelligence.  Another corvid, Grey Jays (Perisoreus canadensis), are also commonly known as ‘camp robbers’ for their ability to steal food from human campers.

Humans aren’t alone either.  Ravens have been observed to watch other animals hide food, wait until the animal departs, and then steal the food for themselves.  Sometimes a raven will watch another raven hiding food away and steal it from a member of their own species.  Corvids sometimes even remove lids from trash cans to get at edible food scraps.

Ravens will fly high with snails or mussels and drop them on rocks or roads, to crack open their shells and render them bird food.  Some members of the corvid family seem to recognize themselves in mirrors, said to be a sign of self-awareness, something once thought reserved for humans and other primates.

Crows are corvids, and like ravens, and are also uncannily intelligent.  There are reports of crows mourning their dead at ‘funerals’; crows sometimes play with friendly pet dogs.  Looking in fast food parking lots or dumpsters behind grocery stores, it’s not hard to find crows (or ravens) living on the scraps of human civilization.  Many birds learn to hang around outdoor eating places and beg scraps from human visitors.  Not only corvids, I’ve also watched egrets in Jamaica quick to take food from tourists.  As human populations grow there are animal winners and losers, much depending on how well an animal species can adapt to close proximity to human population centers.  It’s clear that some corvids are evolutionary winners in cities.

One study seems to show that crows can recognize human faces.  Researchers catching and banding crows for research wore latex caveman masks.  Returning later to groups of crows, some researchers wore no masks or a new mask the crows had never seen before and were largely ignored.  The researchers that wore the caveman mask again were followed and harassed by groups of crows, suggesting that the crows recognized the mask.  Recognizing faces doesn’t seem surprising but scientific evidence that animals recognize human faces has been slow coming.

Unsurprisingly, members of the corvid family, which includes 120 species, have one of the largest brain to body ratios for birds or even other animals.  Corvids are clever birds that can use tools, learn and quickly adapt to a host of situations.  You may catch a corvid picking over an untended picnic lunch or your garbage and wonder at the bird’s boldness.  Unless something changes, for many animals the new norm will be living inside towns and cities.  I personally have a mix of happy admiration and wistful sadness when I consider birds living so closely to potentially destructive humans.  I hope we have enough wisdom to continue allowing certain animals to survive in the wake of our destructive path.