How to spot a real reindeer from their close relatives • Earth.com 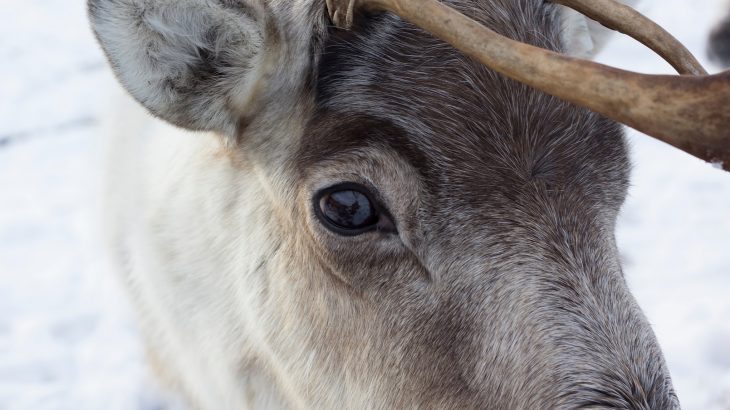 How to spot a real reindeer from their close relatives

Reindeer certainly play a legendary role in the celebration of Christmas. But for some, the term ‘reindeer’ itself is confusing and I feel a bit of clarification is an order.

Caribou and reindeer are often considered the same species, Rangifer tarandus.  Though some will bicker and say that the Caribou is Rangifer tarandus and the Reindeer is Tarandus tarandus, it’s clear that they’re more similar than different from each other.

This doesn’t mean there is no difference between the two.  Caribou is the term usually used in North America and refers to a wild animal found in the Pacific Northwest, Canada, Alaska and Greenland.  Reindeer however is commonly the word used for the animal in Europe and captive animals in North America as well.  This explains why the animals pulling Santa Clause’s sleigh are never referred to as caribou but always as reindeer.  It also explains why you can be a reindeer herder but not a caribou herder. The closer you look the more complex (and confusing) the picture of caribou/reindeer becomes.

Interestingly, some reindeer aren’t fully domesticated like most animals you think of herding, instead they’re in a middle ground.  Semi-domesticated reindeer are important to a lot of people in a similar way to how a lot of livestock, like cows are to Americans. Reindeer herding is part of pan-arctic culture, something shared by many native peoples across the entirety of the Arctic region.

There are 30 reindeer herding peoples worldwide, with about 3 to 4 million reindeer.  The herders are spread across 9 nations: Norway, Finland, Sweden, Russia, Greenland, USA (Alaska), Mongolia, China and Canada.  There is also a small reindeer herd maintained in Scotland, although the animal is not native there. Instead, reindeer were introduced to Scotland’s Cairngorms in 1952 by a Sámi herder from Sweden.  The practice seems to have an ancient origin and more is shared between the cultures in how they carry out herding than is different between them.

The oldest account of reindeer herding comes from the 800s, when a Norwegian chief visited the king of England and related to him that the Sámi people managed herds of reindeer.  The Sámi currently herd reindeer in Sweden, Norway and Finland. The modern national borders have sometimes been troublesome for people who traditionally crossed over these artificial lines without a thought.  Different conventions between the countries have allowed for the people to pass from one nation to another but in a carefully managed way. Currently, a new agreement between Norway and Sweden is being negotiated.

Many reindeer populations, like the one in the US, are made of animals suitable for meat and fur but not as beasts of burden.  Some of the reindeer of Mongolia are different. Interestingly people sometimes actually ride reindeer in Mongolia. According to CNN Travel, the Dukha or Tsaatan people of Mongolia have herded reindeer through remote forests for centuries.  Once there were around 200 families living in this way in Mongolia, now the number is down to 40 reindeer herding families in Mongolia with around 1,000 reindeer.

Part of the problem comes from the lure of big cities and an easier way of life, part of the problem comes from government pressure.  The Mongolian government has declared traditional Dukha land as part of parks, pushing native peoples off, paying each family roughly $150 in compensation.  Controversially, some of the Dukha people have moved reindeer from their remote and hard to reach homeland to warmer, more accessible places as a tourist attraction.  Some worry about the welfare of the reindeer as well as the culture they’re connected to in Mongolia.

Russia is another place with a large amount of reindeer herding.  According to an article in the Atlantic, it was estimated that the Nenet people of Russia would cull or harvest 3,000 reindeer for their meat in 2016.  Reindeer meat, fur and antlers provide money and a way of life for people in a remote area with few natural resources.  Reindeer are also used to pull sleds.

In the US, the BLM in Alaska issues permits for reindeer herding but only native peoples need apply as per the 1937 Reindeer Industry Act.  According to the BLM website, there is over one million acres of land available for reindeer herding in Alaska. All the ranges contain a patchwork of different owners but the BLM issues permits without a fee, only charging a $10 filing fee with each application.

According to the Alaska Fish and Game Department, there are about 18,000 reindeer in the state, 12,000 of them on the Seward Peninsula.  Alaskan Reindeer are even found in remote islands, including the Pribilof and Aleutian Islands; places about as remote as possible in the United States.  In Alaska, reindeer are sometimes herded by helicopter, with small crews working on ground to close the animals in pens. Herding reindeer is possible because their behavior is slightly different from caribou.  Caribou scatter when faced with danger, reindeer move together en masse when confronted by something like a helicopter chase.

Interestingly, some of the reindeer sneak away from their domestic masters and join their wild cousins.  According to one herder in Alaska, about 75% of a herd was lost to this type of desertion. The complicated relationship between caribou and reindeer is partly what makes the whole thing interesting.  We see a relationship between two animals: humans and caribou/reindeer still very much developing.

According to Reindeer Herding, there are at least 7 subspecies of Rangifer tarandus, some of which are referred to as caribou, some referred to as reindeer.  The website claims only one of these subspecies is a caribou, calling the others reindeer, deepening the confusion between the two.  Reindeer or Caribou come in subspecies adapted to the mountains and the forest. The mountain animals migrate between summer and winter ranges, while their forest cousins live in the same area year round.  People likewise move with caribou or stay with them, adapting to the realities of the local environment.

Whether caribou or reindeer, herders such as those in the Arctic can teach us something of what it is to be human, one clever ape on a planet full of wild and wonderful creatures.