Red invasion: The rise of the Red Cherry Shrimp • Earth.com 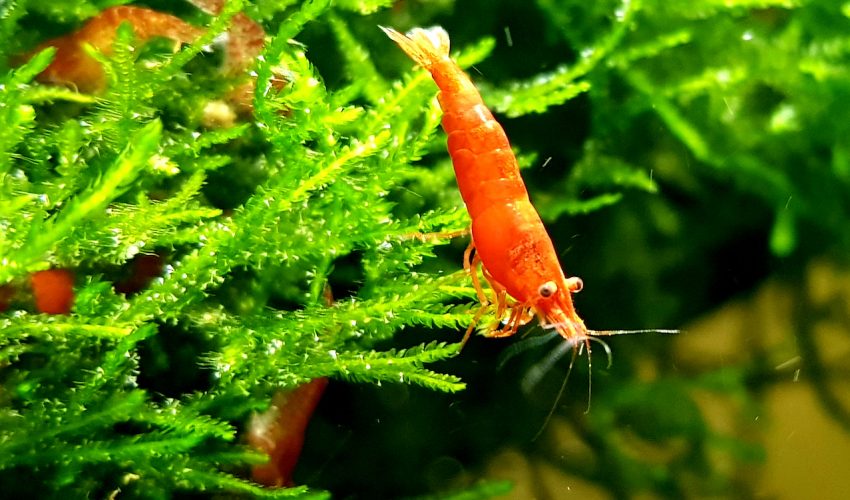 Red invasion: The rise of the Red Cherry Shrimp

First described by French naturalist E.L. Bouvier in 1904, the so-called red cherry shrimp (Neocaridina davidi, formerly N. denticulata sinensis and N. heteropoda) has exploded in popularity in the aquarium world in the past several decades.

True red is a rare color in freshwater animals and as such, the brilliant coloration of this species has proven highly attractive to aquarists around the world. In the wilds of its native Taiwan, southern China, and Vietnam, the species is actually rather dull, usually brown, though it may vary significantly even among a single population.

Asian breeders selected for the red variation over a period of years and this variation, known as the red cherry, became popular worldwide starting in the 1990s. Since then, increasingly vibrant red strains have been developed, with evocative names such as sakura and rilli, as well as blue, yellow, black, and white varieties.

The ease of culture is a key factor in its rapid spread. Even many big box pet stores now stock them. The 3 cm long crustaceans feed mainly on algae, including the difficult-to-eradicate hair algae, biofilm (or aufwuchs), and detritus, and are comfortable in tanks as small as one gallon.

Though they only live a maximum of 1.5 years, their reproductive rates ensure that well-maintained aquariums will have a persistent population. Red cherries are even comfortable with some species of fish, provided that they are not large enough to eat them. If kept with fish, plants are essential, as they will provide shelter for the larvae until they are large enough to prevent consumption by their tankmates.

Red cherries are fairly adaptable in terms of water parameters. They are sensitive to copper and chlorine and the water must be sufficiently hard to support molting. They require calcium carbonate to regenerate their exoskeletons and even ingest the shed shells.

After a female molts, she releases pheromones into the water, attracting males, which provide sperm. Females are capable of storing this sperm for later use. The eggs are fertilized by this stored sperm as she lays them. She carries as many as 30 eggs at time and during this period is said to be “berried” due to the clumps of eggs held on her swimmerets (or pleopods), the tiny legs used in swimming. The eggs hatch in a mere three to five weeks, producing tiny, transparent larvae of perhaps 1 mm.

These larvae are miniatures of the adults and immediately begin foraging on their own. The absence of a planktonic stage in the larvae makes the species particularly useful as an aquaculture subject. Many species of shrimp produce young that require a period suspended in the water column as plankton, which can be difficult to support in an aquarium. Those species are most often brought into cultivation as wild-caught specimens and are challenging to breed.

The red cherry, on the other hand, is profoundly fecund even in suboptimal conditions. Aquarists report specimens breeding inside of aquarium filters after they have been sucked into them. This adaptability has led scientists to proposed increased use of them as a model organism.

It has also allowed them to invade non-native habitats. As early as 1991, they were discovered on the Hawaiian island of Oahu, where they are now widespread. They were initially thought to be new native species, but appear to have been introduced by aquarists. (They are a different from the Hawaiian volcano shrimp, Halocaridina rubra, which prefers brackish waters and may be familiar to some as the shrimp used in Ecospheres, the closed ecosystems popular as desktop ornaments.)

The balmy environs of the island allowed them to multiply largely unchecked, leading scientists to speculate that they may compete with native freshwater crustaceans and insects. They have also been released in Japan, where they may compete with and hybridize with the native N. denticulata. More surprisingly, they have also colonized the River Erft in Germany. This is thought to have been made possible by thermal pollution, or the unnatural warming of water due to power plant discharge.

A similar scenario occurred in Poland, where a population was discovered in a warm canal emanating from a power plant. However, specimens were also found in a German pond that froze over during the winter, suggesting even greater adaptability than previously thought. While the ecological impacts of these invasions have not been thoroughly examined, some fear that the creatures could carry crayfish plague, which could devastate native crayfish populations.

With that in mind, aquarists would do well to keep these flaming beauties contained.