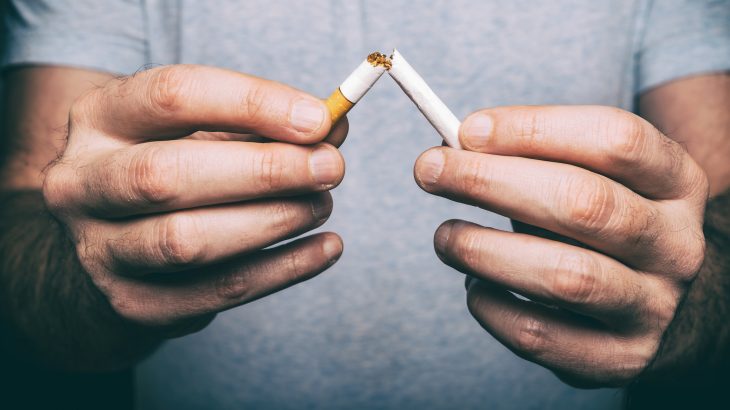 According to a new study from a research team based at Oregon State University, reducing drinking can help a person quit smoking. Researchers found that as heavy drinkers limited their alcohol intake, their nicotine metabolite ratio — a biomarker that shows how fast a person’s body metabolizes nicotine — was reduced.

The study’s findings, published in Nicotine & Tobacco Research, show when a smoker cuts back on their drinking, their nicotine metabolism rate slows, thus helping them shake their dependence on cigarettes.

“It takes a lot of determination to quit smoking, often several attempts,” said the study’s lead author, Sarah Dermody, an assistant professor in the School of Psychological Science at OSU’s College of Liberal Arts. “This research suggests that drinking is changing the nicotine metabolism as indexed by the nicotine metabolite ratio, and that daily smoking and heavy drinking may best be treated together.”

Currently, about 1 in 5 adults use both alcohol and cigarettes, with cigarette use being prevalent amongst heavy drinkers. The two habits directly coincide, as previous studies have shown. To better understand the connection between smoking and drinking, Dermody and colleagues from Toronto’s Centre for Addiction and Mental Health studied individual nicotine metabolite ratios within a group of 22 smokers who were seeking treatment for their alcohol dependency.

As the men in the group reduced their drinking from 29 drinks per week to 7 drinks per week, their nicotine metabolite rate dropped significantly. However, the women involved in the study did not see a drop in their nicotine metabolite rate, and this is most likely because they collectively did not significantly reduce their drinking within the study period.

“The nicotine metabolite ratio was thought to be a stable index, but it may not be as stable as we thought,” said Dermody regarding the results seen from the men in the group. “From a clinical standpoint, that’s a positive thing, because if someone wants to stop smoking, we may want to encourage them to reduce their drinking to encourage their smoking cessation plan.”

Dermody is now working on another study involving heavy drinkers and smokers who are willing to participate in an intervention to reduce their alcohol intake. She hopes this study will be even more telling regarding the connection between drinking and smoking, thus proving that addressing both habits is necessary to help those who want to quit either or.