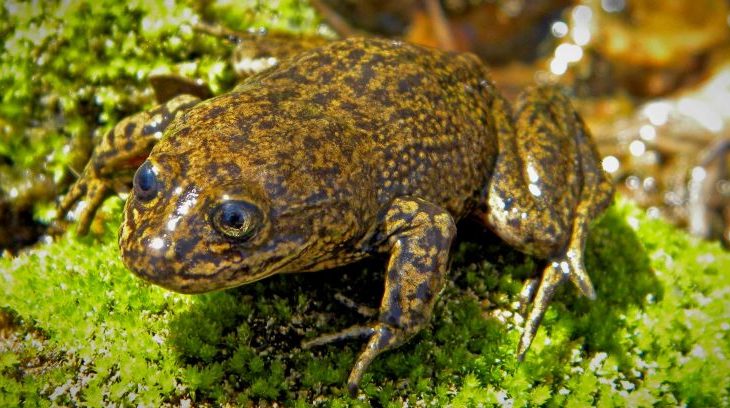 Three days after herpetologist Andrés Charrier discovered a critically endangered species of water frog in Chile had disappeared from the now dried up single stream they were known to inhabit, he and a team of conservationists lept into action to understand what had happened, and more importantly, where the frogs had gone.

As Charrier started examining the Loa water frog’s habitat, likely dried up due to illegal water extraction through mining or agriculture, he discovered a muddy pond and buried in the muck were several live, malnourished, and sickly water frogs.

“We had a choice to make,” Charrier told Global Wildlife Conservation.  “As scientists, we could either do something or we could leave the frogs there to die and then publish a paper about the extinction of the Loa Water Frog. We decided to do something.”

The frogs, 14 in total and what may very well be the last remaining of the species, were relocated to the National Zoo of Chile. Currently, specialists at the zoo are working on caring for the frogs and helping them recover.

The Loa water frogs lived in a stream in the middle of the Atacama desert near the city of Calama. When their habitat had all but dried up, the researchers needed to make a plan.

The hope is that the National Zoo of Chile can start a breeding program to conserve and protect the species.

“The first big challenge is to help these frogs survive, and while the rescue was the best chance to save the Loa water frog, there are always risks with trying to care for a new species—especially when the animals are already struggling,” said Alejandra Montalba, director of the National Zoo of Chile.  “That’s the main goal right now, and later we need to be able to breed them.”

Conservationists are also calling on the Chilean government to implement policies to restore the water frog’s habitat and stop activities that pose a threat to the Loa water frog’s survival.

Protecting the Loa water frogs and 63 other species of water frogs found in Chile, Peru, Ecuador, Bolivia, and Argentina is vital, but it’s not just water frogs that are in danger if watersheds dry up.

“What will happen to the frogs in Chile will happen to the people here in the not too distant future,” said Charrier, “If the frogs from the high mountains from Santiago start dying because their rivers go dry, we will have no water to drink in Santiago. These connections are critical.”