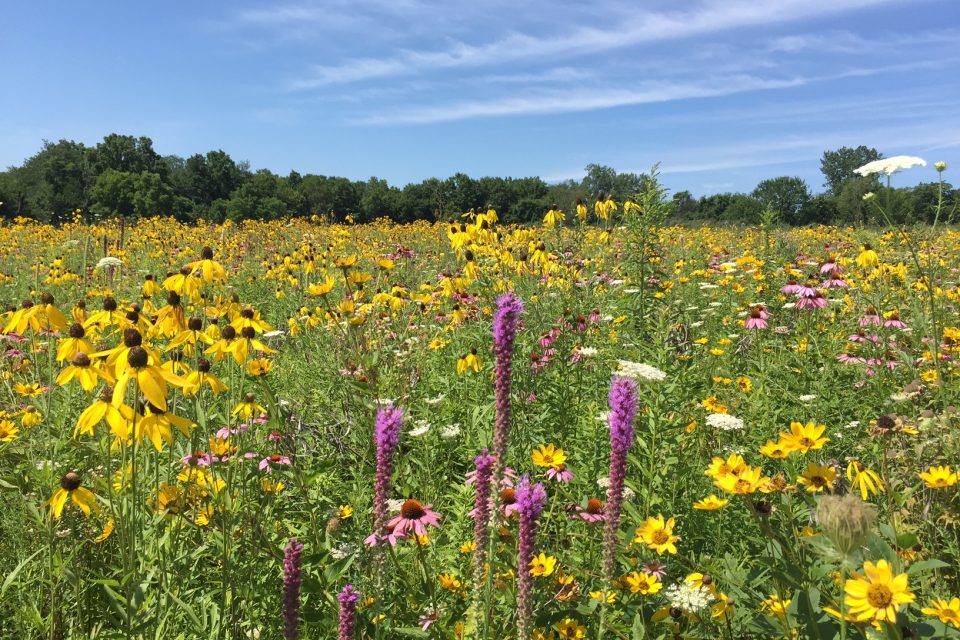 Some 10,000 years ago, following the recession of the glaciers that had blanketed the central portion of North America, drastic ecological changes began to occur. At first dominated by tundra vegetation, followed by mixed hardwood forest, the region converted to grasslands over the relatively short period of several thousand years. By 8,300 years ago, a period of warm, dry climate had eliminated much of the forest cover, which then gave way to a distinct prairie ecosystem dominated by grasses mixed with herbaceous flowering plants.

Prior to European settlement, this ecosystem constituted the largest on the continent, stretching for some 1.4 million square miles running south from Manitoba to Texas, and east from the Rocky Mountains to Indiana. The majority of the Midwest was at one time covered by tallgrass prairie, perhaps the most well-known and evocative prairie ecotype—this was the prairie that early explorers claimed, probably erroneously, was taller than a man on horseback. Proceeding towards the Rockies, this faded from mixed grass prairie to the short grass prairie of the West.

Supporting a unique flora and fauna, including the ubiquitous big bluestem grass (Andropogon gerardii) and some 60 million bison, plus hundreds of other species, the virgin prairie has been compared in extent and diversity to the Amazon rainforest. Native Americans lived in relative harmony with the ecosystem, sustainably harvesting what they needed.

A delicate balance was maintained by the activity of grazers such as bison, deer, and antelope, as well as by smaller herbivores, notably the the prairie dog, and by fires sparked by lightning and by Native Americans. Burns helped to cycle nutrients and prevented the incursion of woody shrubs and trees. And the periodic removal of grasses by grazing allowed larger patches of herbaceous plants to spring up where grasses had previously been dominant. Thus, the mosaic of prairie life constantly shifted with the occurrence of fires and the movements of the bison herds and the humans who depended upon them.

Prior to westward exploration, it was believed that the forests of the East stretched across the continent. Not so, as it turned out. In the 1600s, French Jesuit explorers were among the first Europeans to lay eyes on the “sea of grass” that covered most of North America’s heartland. And it was they who dubbed it the “prairie,” after a French word for “meadow.” That word itself derives from the Latin, pratum. Their wonderment would, within two centuries, give way to a surge of exploitation that ultimately decimated the ecosystem.

Beginning in the 1830s and intensifying later in the 19th century with the passage of the Homestead Act of 1862, a series of land runs turned the fertile land over to a burgeoning population of pioneers eager to farm it. The prairie was converted to agriculture in short order, a process further hastened by John Deere’s invention of the steel moldboard plow in 1837.

In the ensuing decades, this innovation made the tilling of the tough prairie sod substantially easier, thus facilitating its conversion to farm fields. This ecological disaster in the making reached critical mass in the early decades of the 20th century, which saw a further wave of settlement and the overfarming of the western expanse of the plains. The conversion of much of this area to wheat farms, known as the “Great Plow-up,” left massive swathes of soil, once contained by the dense root systems of prairie plants, exposed to the elements. Combined with a period of drought, this resulted in the decade-long Dust Bowl of the 1930s, which saw windstorms carrying eroded soil blacken the skies of the region and devastate farming communities. 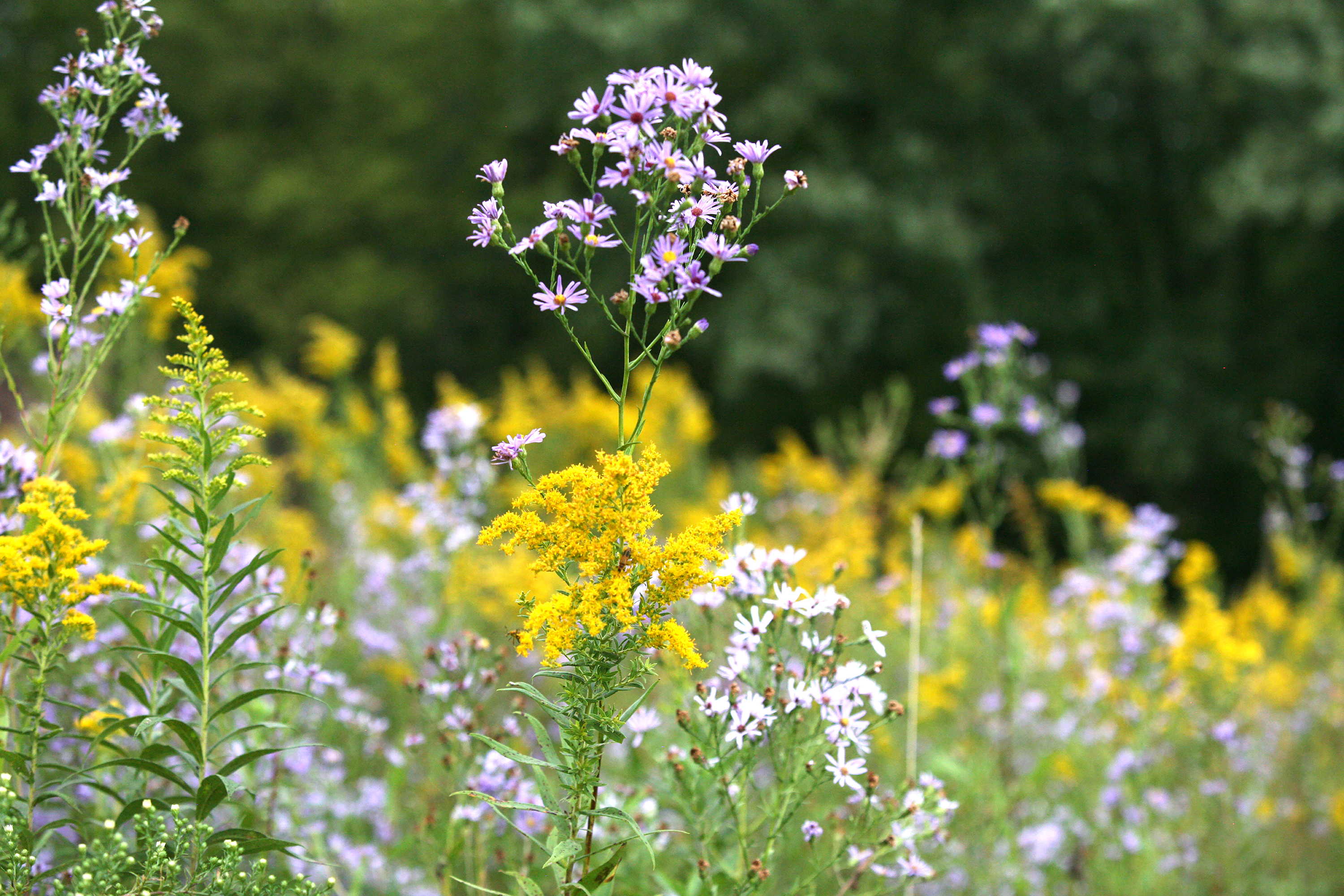 Even prior to the mitigation efforts that followed this catastrophe, which included the planting of windbreaks and cover crops, often with non-native plants, some had raised concern about the destruction of the prairies and begun advocating conservation. Thomas McBride, who was influential in the formation of the Iowa state park system in the early 1900s, noted the need to preserve what was left of the grasslands. And Iowa botanist Ada Hayden famously proclaimed that “the goddess of agriculture ha[d] banished the prairie.” In a 1919 article, she called for the establishment of remnant prairie reserves on unused land along rail corridors and elsewhere.

It was not, however, until 1934 that the first formal prairie restoration was initiated at the University of Wisconsin-Madison. Intensive efforts began in 1936. Using workers from the Civilian Conservation Corps, a large patch of former farmland was planted with sod taken from relict prairies. Among the scientists who conceptualized this restoration as a representative of pre-settlement ecosystems was famed conservationist Aldo Leopold. A second restoration effort was initiated in 1943 on a nearby plot. These became the Curtis and Greene prairies, still extant today. At a combined 110 acres, they remain among the largest and most significant restorations attempted.

Such early efforts served to illustrate the difficulties of re-establishing such a complex ecosystem. Non-native plants persisted despite the transplantation of natives and maintaining the diversity of species representative of virgin prairie proved difficult due to the dominance of grasses, which even in a healthy prairie constitute 60-80% of the biomass. It was at UW-Madison that periodic burns were first employed, mimicking the fires that once swept the prairies as a result of lightning strikes and Native American intervention. In addition to helping to suppress non-native weeds such as bluegrass and autumn olive, the burns helped certain types of native seeds to germinate.

The lessons learned from such experiments were invaluable as prairie restoration efforts intensified starting in the 1960s. Now, restorations have been established in most areas that once hosted prairies in the United States and Canada. Notable prairies include Midewin National Tallgrass Prairie, Schulenberg Prairie, Goose Lake Prairie State Park, and Fermilab Prairie in Illinois, the Glacial Ridge Project in Minnesota, Broken Kettle Grasslands in Iowa, and Beaudry Provincial Park in Manitoba.

It is tempting to view these restorations as a losing battle. The North American prairie is one of the world’s most endangered ecosystems. Some 99% of the original prairies have been turned over to agriculture, with short grass prairies in the West retaining more of their original range than mixed grass and tallgrass prairies. Illinois, still known as the Prairie State, retains less than .01% of its tallgrass ecosystem. Still, even small restorations provide valuable wildlife habitat as well as so-called ecosystem services. Because of the extensive surface areas of prairie plants above ground and their massive root systems, which may penetrate up to 15 feet into the soil, prairies absorb massive amounts of rainwater, preventing run-off and helping to recharge groundwater systems. They are also important carbon sinks.

Refinements of the restoration process will only amplify these benefits. Studies have demonstrated that inoculating prairie seeds with spores of their mycorrhizal symbionts may assist in their establishment and contribute to the overall health of the restoration. Experiments with various types of soil tilling, transplantation, and seeding have made it easier for restorationists to adapt their methodology to a certain site based on its characteristics and what has worked best on similar sites. The use of seeds from nearby areas, when possible, has been a particular focus. The use of burning has been modified to ensure that certain invertebrate species are not eliminated. Only portions of some restorations are burned each year, allowing insects and arachnids that cannot survive fires to persist in unburned areas and repopulate the burned areas once the vegetation regenerates. And the reintroduction of bison to some prairies has demonstrated their integral role in maintaining the balance of the ecosystem. At Midewin Prairie, their grazing habits have allowed certain forbs to flourish as grasses are trimmed by browsing, and have created additional space for the endangered upland sandpiper, which requires short grass to breed.

Such successes reinforce the restorationist maxim “if you build it, they will come.” Indeed, the increasingly sophisticated understanding of the prairie ecosystem has led to the planting of prairies that serve a huge suite of rare and endangered animals. So, you see, to paraphrase Emily Dickinson, the revery alone won’t do. Intensive thought and intensive labor are now necessary to make a prairie. Luckily, a few committed conservationists are equal to the task.