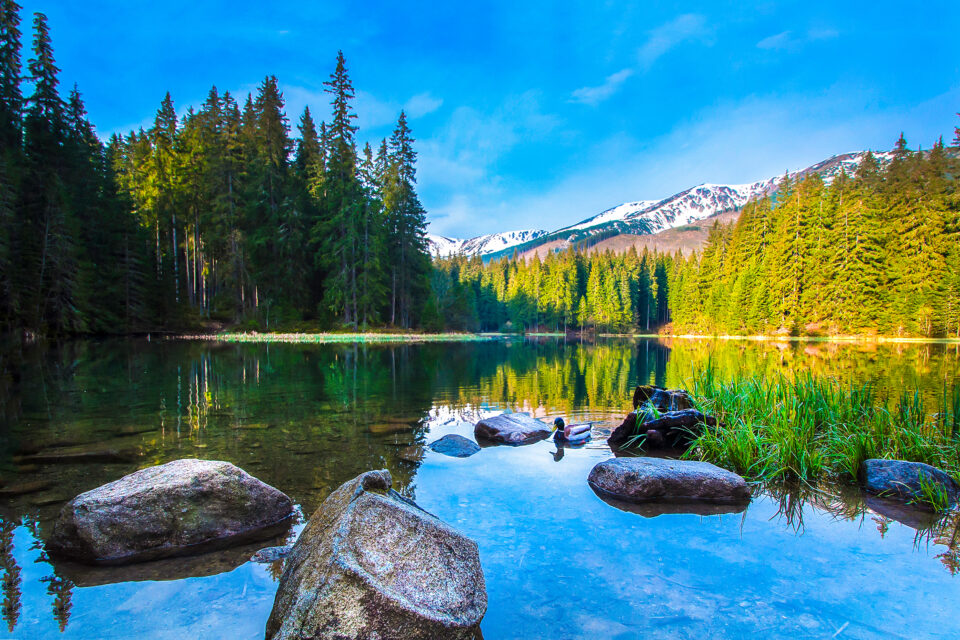 Across North America and Europe, human activities are responsible for introducing salt pollution into freshwater ecosystems. Sodium chloride is used extensively to melt ice on roads in winter, and inorganic fertilizers contain various salts that can dissolve in rain water and run off into local waterways. Mining operations also introduce salts into the environment, many of which end up in freshwater ecosystems.

Freshwater organisms are very sensitive to the increased concentration of salts, and levels that are too high can result in decreased biodiversity. In particular, zooplankton are killed by increasing salt (sodium chloride) concentrations and, since these microscopic animals feed on algae and are eaten by young fish and many invertebrates, the entire food web is threatened when zooplankton populations decrease.

Many governments have environmental guidelines that limit the acceptable levels of salt in freshwater ecosystems. However, these vary widely and, as a new research study shows, negative impacts on zooplankton populations commonly occur at concentrations below these limits. The study, led by researchers from the University of Toledo and Queen’s University in Kingston, found that even at salt concentrations well below ranges that government regulators have deemed safe and protective of freshwater organisms, significant damage is being done to freshwater lakes.

“It’s clear that salt pollution in freshwater lakes, streams, and wetlands, even when constrained to levels specifically chosen to protect the environment, threatens the biodiversity and overall function of freshwater ecosystems. This is a global problem that has the potential to impact ecosystems and human health,” said study co-author Rick Relyea, an expert in the impacts of road salt on freshwater ecosystems, and director of Rensselaer’s Darrin Fresh Water Institute.

Dr. Relyea, a member of the Rensselaer Center for Biotechnology and Interdisciplinary Studies and director of the Jefferson Project at Lake George, has conducted extensive research on the impacts of road salt pollution on aquatic environments. His previous work established that road salt masculinizes developing frogs and causes the population sex ratios to be biased in favor of males.

In addition, previous research has shown that, although some small zooplankton species can adapt to high levels of salt, this obliterates the circadian rhythm in these individuals. In recent work, Dr. Relyea has collaborated with an experimental network of 16 sites in four countries across North America and Europe. Earlier this year, Dr. Relyea and that network produced experimental findings led by Canadian scientist Marie-Pier Hébert, which showed that lake salinization reduces zooplankton abundance and diversity.

In the current study, researchers measured the chloride concentration in freshwater bodies across North America and Europe. They also quantified the population diversity and numbers of zooplankton present in naturally occurring communities in these habitats. The goal was to determine whether current chloride-based water-quality guidelines protect lake organisms in regions with different geology, water chemistry, land-use, and species pools.

Alarmingly, the results of the current study, published today in the Proceedings of the National Academy of Sciences, finds that negative impacts of salinization occur well below those limits. At nearly three quarters of the study sites, chloride concentration thresholds that caused more than a 50 percent reduction in zooplankton were at, or below, the governments’ established chloride thresholds.

Where zooplankton populations were reduced, numerous cascading ecosystem changes were recorded. For example, the biomass of phytoplankton (minute plants, also referred to as algae) increased where the numbers of herbivorous zooplankton were reduced, and this bloom in phytoplankton blocked the passage of sunlight to plants growing lower down in the water.

“More algae in the water could lead to a reduction in water clarity, which could affect organisms living on the bottom of lakes as well,” said Shelley Arnott, professor of aquatic ecology at Queen’s University and co-leader of the project and paper. “The loss of zooplankton leading to more algae has the potential to alter lake ecosystems in ways that might change the services lakes provide, namely recreational opportunities, drinking water quality, and fisheries.”

The researchers say their results indicate a major threat to the biodiversity and functioning of freshwater ecosystems and urge governments to reassess current threshold concentrations to protect lakes from salinization caused by sodium chloride.

“Many salt-contaminated lakes with chloride concentrations near or above thresholds established throughout North America and Europe might have already experienced food web shifts,” said Bill Hintz, assistant professor of ecology at the University of Toledo, author, and co-leader of the project. “This applies to lakes across the globe, not only among the study sites. And the variability in our experimental results demonstrates how new thresholds should integrate the susceptibility of ecological communities at the local and regional scale. While the government guidelines may protect freshwater organisms in some regions, that’s not the case for many regions in the U.S., Canada, and Europe.”

“Salt pollution occurring from human activities such as the use of road de-icing salts is increasing the salinity of freshwater ecosystems to the point that the guidelines designed to protect fresh waters aren’t doing their job,” said Dr. Hintz. “Our study shows the ecological costs of salinization and illustrates the immediate need to reassess and reduce existing chloride thresholds and to set sound guidelines in countries where they do not exist, to protect lakes from salt pollution.”

The experts conclude that potential solutions need to be identified that include finding ways to strike a careful balance between human use of salt and the ecological impacts on freshwater ecosystems. This might involve reducing the amount of road salt used to melt winter snow and ice to keep people safe and traffic moving.