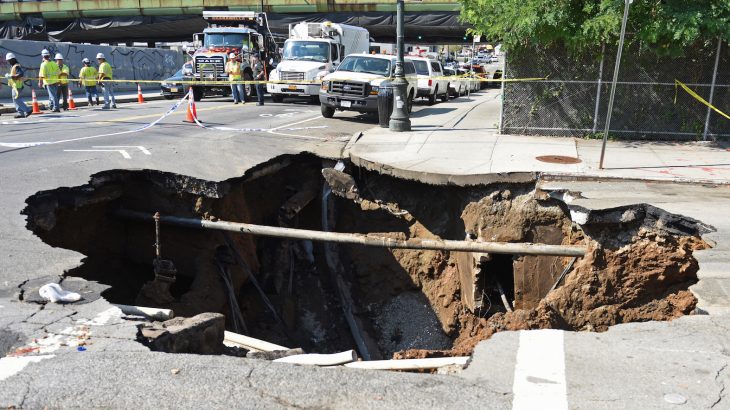 Scientists from Keele University are describing how experts can detect a sinkhole before it is visible. In an article written for The Conversation, Peter Styles and Jamie Pringle explain that measuring microgravity can provide evidence of a cavity that has formed beneath the Earth’s surface prior to a collapse.

Most sinkholes occur in areas where the bedrock is formed from soft minerals and carbonate rocks like limestone or dolostone. Sinkholes often happen naturally, but are also linked to human activities such as mining.

“The geology of the rocks beneath you is a clue to the possibility of sinkholes. Limestone is prone to dissolution by groundwater which can, over time, create enormous networks of underground caves known as karst. These can collapse downwards due to gravity, leading to great surface depressions and subsidence damage and even the complete loss of houses,” wrote the study authors.

The surface collapses can be gradual or happen overnight, according to the experts. They say that in regions where all of the surface rocks are limestone,  such as areas of China and Florida, there is little warning before sinkholes develop.

The scientists have both examined sinkholes across the world, including in Australia, the Middle East, and in the Bahamas. Styles and Pringle have also investigated mining cavities in South Wales and Yorkshire.

“Over the years, we have become experts in measuring the Earth’s gravity at ultra-high precision to a few parts in a billion. This is known as microgravity,” wrote the researchers. “We can use this to detect a cavity, or even a partially-filled area with less density than the surrounding rocks, long before any collapse reaches the surface.”

“An additional innovation we have developed is to carry out what are known as 4-D, time-varying, repeated microgravity surveys at intervals of months to years. This enables us to detect changes in gravity, which suggest that the cavities are propagating towards the surface and potentially becoming unstable.”

The original report by the scientists can be accessed here.