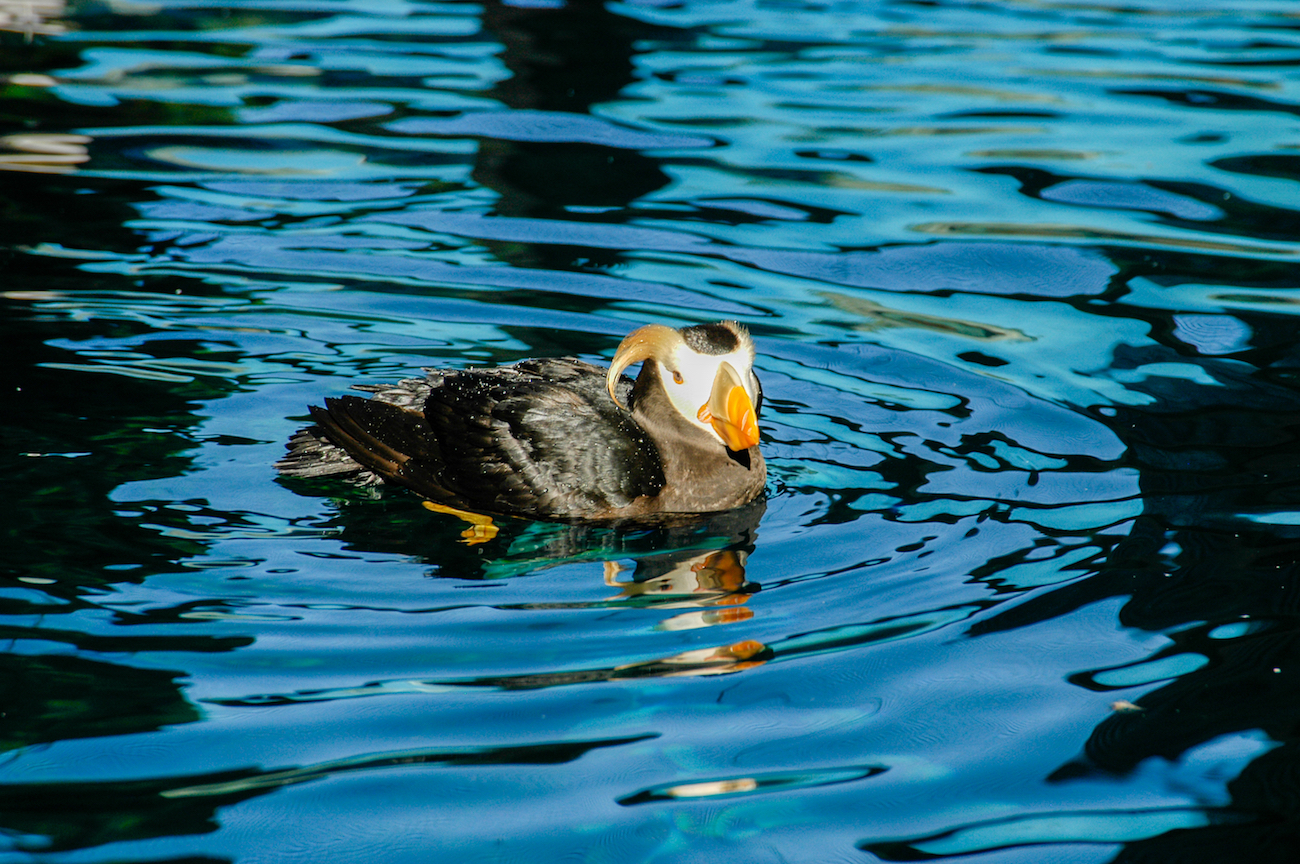 It was over five years ago but it seems so very recent.  I spent the Fourth of July in a small boat out on the ocean with the other man who was monitoring fishing in a small bay on Afognak Island in Alaska.  We sat in the small boat with an even smaller outboard motor, sipped beer and just took in our surroundings.  The weather was cold for those used to Fourth of July further south but it was pleasant.  All around us, the air and sea were full of life.

Puffins took off from the water with frantically beating wings, skimming the sea surface even longer than a duck on a pond.  Puffin wings are tiny, an evolutionary compromise between swimming and flying.  To me, puffins with their bright beaks and manic flapping always resemble clowns on the wing.  Puffins can administer surprisingly nasty bites though.  I remember from my time helping with sea bird research on Middleton Island in Alaska, researchers fear of the bird’s beak.

Gulls seemed to be flying everywhere on that preternaturally bright, cool summer day, flying with more grace and noise than the puffins.  Most people have memories of gulls from childhood.  I know I was encouraged to feed gulls pieces of bread on the beach as a kid (a practice I think shouldn’t be encouraged as it’s not good for birds).  There is more than one gull in Alaska and other northern regions, including Black-legged Kittiwakes, Red-Legged Kittiwakes, Glaucous-Winged Gulls, and Ring-Billed Gulls.  I’m certainly no expert on gulls but I have personal experience working with black-legged kittiwakes and glaucous-winged gulls.

The kittiwakes were part of a research project which involved feeding a portion of the nesting population fish additional to those they caught.  Surprisingly, the chicks which benefited from extra fish, took longer to grow and leave the nest, not being rushed into finding their own food by necessity.  Generally the kittiwakes were pretty ruthless, fighting over nest spots and pushing off other bird’s eggs and chicks to fall great distances just to lay their own eggs.  In one case I watched a new pair of birds force parents with a chick nearly fledged off their nest.  It seemed like the chick was doomed to death until the interlopers started feeding the chick as if she were their own.

I have no such nice story for the glaucous-winged gull.  As a volunteer I collected data on nesting glaucous-wings on a rocky beach spotted with ferns and short bushes.  The glaucous-winged gulls are exceedingly territorial and will kill a chick or adult that strays unknowingly into another bird’s territory.  I was told that once a volunteer was taking measurements on a large glaucous-wing chick when the chick vomited another chicks disembodied leg onto the volunteer’s boot.  The leg still had a band placed on its ankle for research.  However violent and uncaring the glaucous-winged gull may appear though, it’s important to note that their violence has a lot more desperate purpose than our own.  It’s hard to imagine any gull killing another for religion, money or a fit of anger but solely for the cold reality of survival of the fittest.

Murres are a little-known arctic and subarctic bird.  The name Murre actually comes from the French word for penguin.  It’s a strange comment on the history of exploration that the southern penguins would be known by the French before the northern Murre but the name appears apt.  Murres are black backed and white bellied.  Common Murres and Thick-billed Murres are hard to discriminate between, being so similar in appearance.  Murres seem so fragile, laying their single egg directly on cliffs with no plants to pad them.  Indeed many times hungry gulls will pull the nesting Murre off egg or chick to relentlessly feed.  Later in the summer one can see Murre father teaching their single chicks to swim and fish.  If a Murre isn’t taught these vital skills by his/her father, they won’t survive.

Throughout Alaska and the northern oceans as a whole there is an abundance of amazing avian forms.  There are snake-necked Pelagic Cormorants with stubby webbed feet and lovely diving abilities found in Alaskan waters.  Rhinoceros Auklets are similar to puffins with smaller bills topped in a tiny ‘horn’, burrowing into soft cliffs by the sea where they nest.  There is the exotic beauty of the red-necked phalarope.  To those from Minnesota it might come as a surprise that the Pacific Loon winters sometimes on the open ocean; the same is true of Common Loons.  Black Oyster Catchers with their telltale long orange bills forage along rocky coasts where they nest.  Ducks include the bright Harlequin Duck, more monochromatic Bufflehead and the Long-Tailed Duck.

The oceans of the north are chock full of abundance, a writhing mass of life in summer and seemingly empty in the winter.  Birds, fish and mammals move together in complex patterns, eating and being eaten by microbes and each other.  Life in the north seems to live in bursts, birds you watched hatch from eggs are fledging in what seems a breathlessly short period.  The demands of weather demand much but on that Fourth of July, when I luxuriated in a boat, life was good for bird and man.