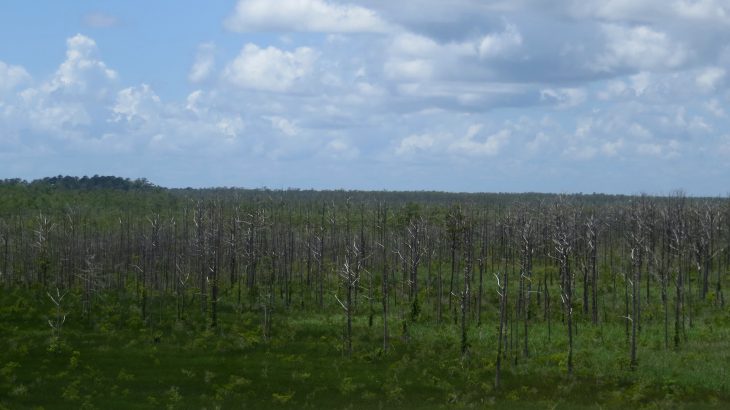 When saltwater kills standing trees, forests are replaced by shrubs and grasses that are more tolerant of salt. This moves vegetation closer to the ground, creating an ideal habitat for birds that prefer the understory rather than the forest canopy.

The current study was focused on changes in coastal forests on the Albemarle-Pamlico Peninsula and the potential consequences for 56 bird species. The peninsula is exceptionally sensitive to sea-level rise, with thousands of square miles below two meters in elevation.

To measure habitat gains and losses, the researchers compared two sets of data collected with sonar-like Light Detection and Ranging (LiDAR) in 2001 and 2014.

“We modeled the birds’ relationships to the vegetation structure – forests, ghost forests and marshes – and then extrapolated to find out how much habitat was lost or gained for a given species,” said study lead author Paul Taillie. “Some birds responded positively to the formation of ghost forests, including some species of high conservation value.”

For example, the northern bobwhite quail, which has been doing poorly across most of its range, is well-suited for life in a ghost forest. Birds like woodpeckers that nest in tree cavities also responded positively to changes in vegetation.

Other species, such as the hooded warbler, lost habitat when ghost forests developed. Overall, ghost forests supported a different variety of bird species than the forests they replaced.

“The larger story of our recent research is that this transition from forest to marshes is a kind of artifact of climate change that could actually benefit some bird species of concern for conservation, including birds associated with marshes,” said Taillie. “Understanding this relationship between climate-change induced vegetation changes and birds is important because it allows us to make more informed decisions, given that these changes are going to happen within our lifetime.”