Sea otters use their paws and whiskers to detect prey • Earth.com 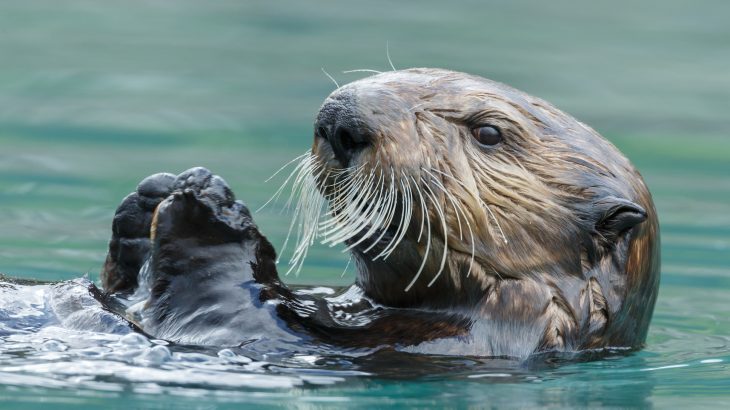 Sea otters use their paws and whiskers to detect prey

A team of experts set out to investigate if sea otters may use other methods of hunting for food beyond the use of sight and smell. The study has revealed that the paws and whiskers of sea otters have a very useful sensitivity that greatly enhances their foraging ability.

Sea otters are well-known for their talented ways of cracking open shells to access food, often using a rock balanced on their chest. On the other hand, little has been understood about the strategies that they use to locate their prey.

Sarah McKay Strobel from the University of California Santa Cruz (UCSC) explained that sea otters consume 25 percent of their own body weight each day just to keep warm. For months, Strobel worked with a group of volunteers in training a wild sea otter named Selka at the Long Marine Laboratory at UCSC.

Selka was instructed to approach a cabinet perched on the side of her pool, in which the trainers had concealed a pair of side-by-side vertically ridged boards – one with grooves that were two millimeters wide and another with grooves that were five millimeters wide. Overall, the sea otter was trained to distinguish between seven size comparisons, and was even taught to interrogate the grids with her whiskers while blindfolded.

“I knew that if I tried to do anything Selka wasn’t ready for, I would very likely get bit… I had to make wearing the blindfold fun,” said Strobel.

Strobel said that she was amazed by Selka’s decisiveness, as she could identify the correct grids in less than 0.2 seconds when using her paw and less than 0.4 seconds when exploring with her whiskers.

According to Strobel, the sea otters’ ability to make rapid decisions based on touch may be essential for their survival.

“Selka used her memory to solve the trial as quickly as possible. Their dives tend to be 1-2 minutes or shorter, which means they have to be very efficient.”

Strobel said that the study results suggest that sea otters are capable of using touch to detect prey in a very short amount of time.