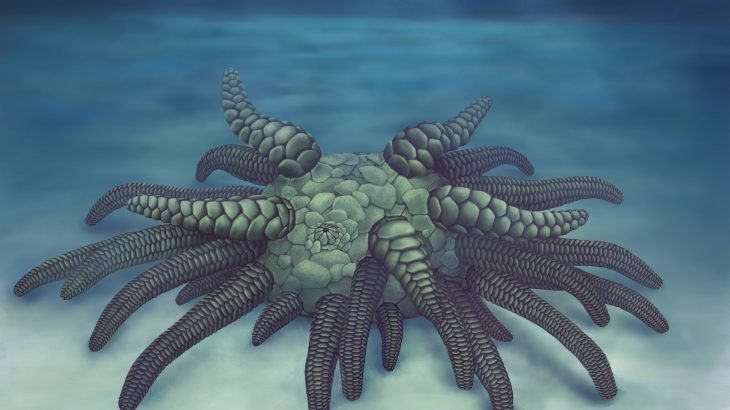 A fossil belonging to an extinct species of ancient marine life is being compared to Cthulu, the tentacled monster from H.P Lovecraft’s famous short story, “The Call of Cthulhu.”

Researchers from Yale, Oxford, the University of Leicester, Imperial College London, and University College London examined the 430 million-year-old fossil and discovered that it belonged to an entirely new species of echinoderm. Starfish, sea urchins and sea cucumbers are all echinoderms.

The researchers named the new species Sallasina cthulu due to its 45 tentacle-like tube feet.

The researchers detailed their findings in a study published in the journal Proceedings of the Royal Society B.

“This new species belongs to an extinct group called the ophiocistioids,” said Derek Briggs, a co-author of the study. “With the aid of high-resolution physical-optical tomography, we describe the species in 3D, revealing internal elements of the water vascular system that were previously unknown in this group and, indeed, in nearly all fossil echinoderms.”

After the researchers created the virtual reconstruction, the images revealed that Sallasina cthulu had an internal water vascular system that is similar to what sea cucumbers have today.

Not much bigger than a large spider, Sallasina would have crawled along the seafloor with the help of its tentacles in search of food.

“The water vascular system operates the tentacle-like structures that they used for locomotion and food capture,” said Briggs. “The tube feet of living echinoderms are naked, but in the ophiocistioids they were plated. Our analysis strongly suggests that ophiocistioids diverged from the line leading to modern sea cucumbers.”