Seabirds copy their neighbors when diving for fish • Earth.com 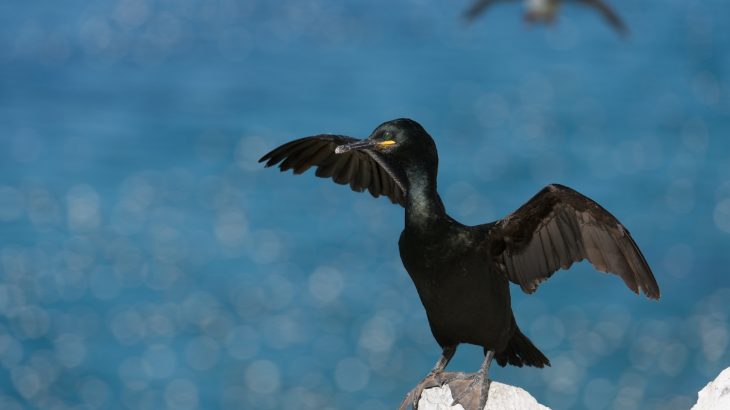 Seabirds copy their neighbors when diving for fish

Seabirds that dive into the salty waves to grab tasty morsels of fish aren’t looking to the sea for cues but instead watch and copy other diving birds, a new study shows.

Researchers from the University of Exeter filmed European shags diving off the Isles of Scilly.

The study, published in the journal PLOS ONE, is the first of it’s kind to examine the diving behavior of large groups or “rafts” or seabirds, and the results show that the birds keep a close eye on their neighbors.

“Our results suggest these birds aren’t just reacting to underwater cues when deciding where and when to dive,” said Dr. Julian Evans, the leader of the study. “They respond to social cues by watching their fellow birds and copying their behavior.”

After filming the birds, the researchers found that a bird was twice as likely to dive for fish once it saw another shag doing so.

If a bird sees another dive and come up empty-handed, then diving is probably not worth it. But if a seabird dives and comes up with a bill full of fish, diving becomes a much safer bet.

It is not entirely clear why the birds choose to wait and watch, but the researchers suggest that it could save energy and reduce the number of unproductive dives.

“Diving in the same area as another bird might also be beneficial because the prey might be disorganised, pushed into certain areas or fatigued by previous divers,” said Evans.

According to the researchers, understanding why seabirds behave the way they do can help inform conservation policy and wildlife management.