Seahorses may be slow, but they are fierce ambush predators • Earth.com 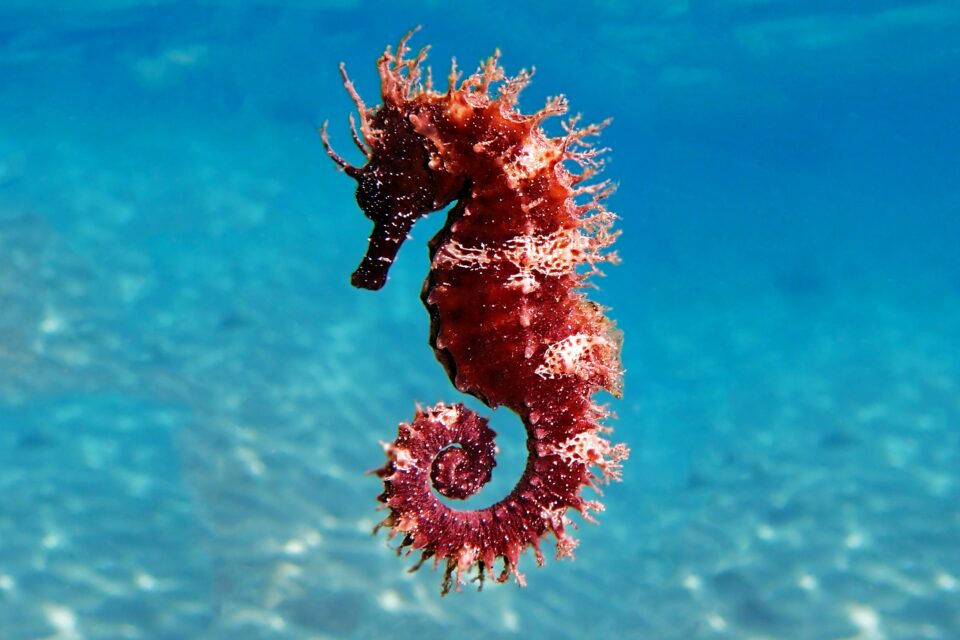 Seahorses may be slow, but they are fierce ambush predators

Although they are slow, poor swimmers that sometimes even die of exhaustion, seahorses have some surprisingly speedy qualities too. A new study published in the Journal of Experimental Biology has found that seahorses are fierce ambush predators which can spring their heads up in 0.002 seconds to snag and devour their unsuspecting prey.

Seahorses spend most of their time anchoring themselves by their tails to seaweed or corals while keeping their heads down, close to their bodies. When they sense prey passing by, they are able to lift their heads at an extraordinary speed to catch it. This movement, faster than any muscle contraction known to exist in the animal kingdom, is possible due to an elastic tendon which they stretch using their back muscles. The mechanism allows them to achieve a head speed rotation 50 times faster than that of other types of fish.

The amazing discovery was made by a team of researchers from Tel Aviv University who used high-speed cameras and laser-scan technology to record the hunting behavior of seahorses. This method also helped in elucidating how their incredibly fast head motions allow the seahorses to eat. The researchers found that the movements were accompanied by a powerful suction flow (eight times faster than those of similar-sized fish) that enabled the seahorses to suck their prey directly into their mouths.

The scientists have also investigated how different seahorse species proceed in capturing their prey by using their specific anatomical traits. “Our study shows that the speed of head movement and suction currents are determined by the length of a seahorse’s nose,” said study lead author Roi Holzman, a professor of Zoology at Tel Aviv University.

“From the evolutionary aspect, seahorses must choose between a short nose for strong suction and moderate head raising, or a long nose for rapid head raising and weaker suction currents. This choice corresponds to the available diet – long-nosed species catch smaller, quicker animals, whereas short-nosed species catch heavier, more ponderous ones,” he explained.

Seahorses are not the only aquatic species to exhibit this fascinating spring mechanism. Other so-called “misfit fish,” including alligator piperfish, cornetfish, and shrimpfish are known to have similar abilities.

“The big question applies to the evolution of the spring mechanism, how it was formed and when it developed. I hope our recent study will lead to further studies designed to help solve the riddle of spring fish,” concluded Professor Holzman.