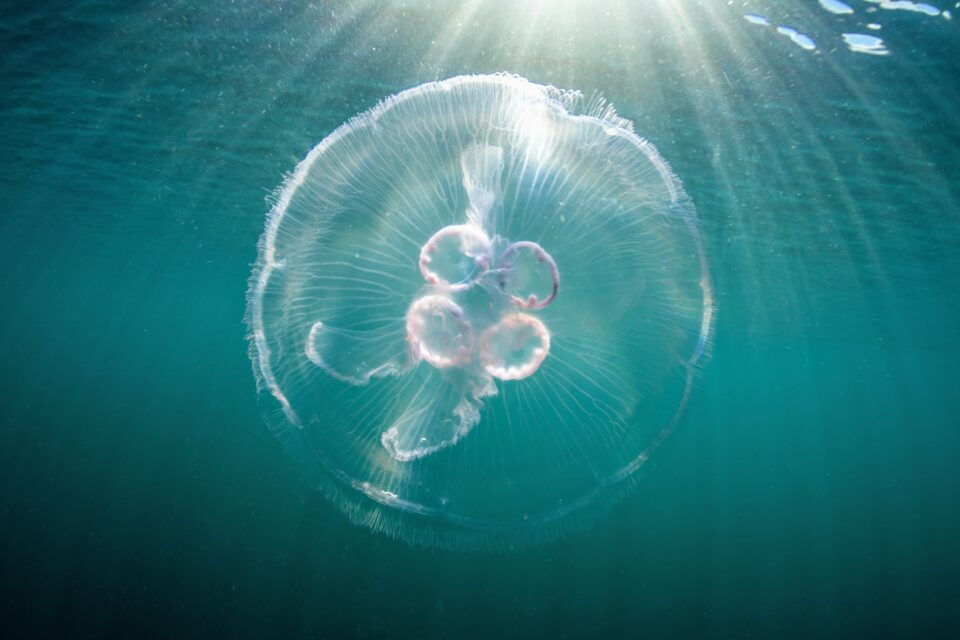 Jellyfish have big appetites, and they mainly float around and eat whatever comes their way. Instead of actively seeking out food, jellyfish basically eat almost anything that is small enough for them to consume.

For this reason, it has been unclear which foods help jellyfish survive or exactly where they fall in the marine food web. But now, a new study from the Institute for the Oceans and Fisheries (IOF) has begun to unravel this mystery.

The researchers analyzed unique isotope and fatty acid signatures, also known as “biomarkers,” that get passed from prey to predator. These markers can be used to trace connections in the food web and to identify the various elements of an animal’s diet.

“Until now, jellyfish ecologists were using a generalized calibration value for these biomarkers because they didn’t have jellyfish-specific ones,” said study lead author Jessica Schaub. “This study tested how much the concentrations of isotopes and fatty acids changed, and how quickly they were absorbed when jellyfish digested their prey and incorporated prey signatures into their bodies.”

“The numbers we found were different enough that it’s worth going back to previous jellyfish studies that applied the general values – they will likely get different results if they applied our values.”

The researchers measured how long it took for the jellyfish to incorporate the stable isotopes and fatty acids, and then calculated how much the two biomarkers changed.

“It seems straightforward, but it’s never that easy – you get the data and you’re like, ‘what’s happening here?’ We were surprised about the moon jellyfish. We fed them two crustaceans, krill and artemia, but they didn’t really incorporate the krill,” explained Schaub.

“We think of jellyfish as not being picky eaters, but in this case, it seemed that they didn’t like feeding on a single diet. Either it didn’t meet their nutritional needs, or they preferred the live artemia over the dead, frozen krill. The aquarium has been feeding them these krill for a long time, so it’s good to be able to tell the aquarium that it’s maybe not worth investing in the krill any longer.”

The investigation revealed that the jellyfish appeared to “elongate” fatty acids, indicating that jellyfish may be able to create their own essential omega-3 and omega-6 fatty acids for healthy body function. This finding came as a surprise to the experts, considering that most animals – with the exception of a rare few – have to obtain omega fatty acids from their diets.

The study authors hope that their findings will be a step towards better understanding the role that jellyfish play in marine ecosystems.

“Jellyfish have long been ignored in research, often considered more of a nuisance than an organism of interest”, said study co-author Dr. Brian Hunt. “However, there is a growing awareness that they can play a key role as both predators and prey.”

The study is published in the Journal of Experimental Marine Biology and Ecology.