The strange problem of the self-cloning crayfish • Earth.com 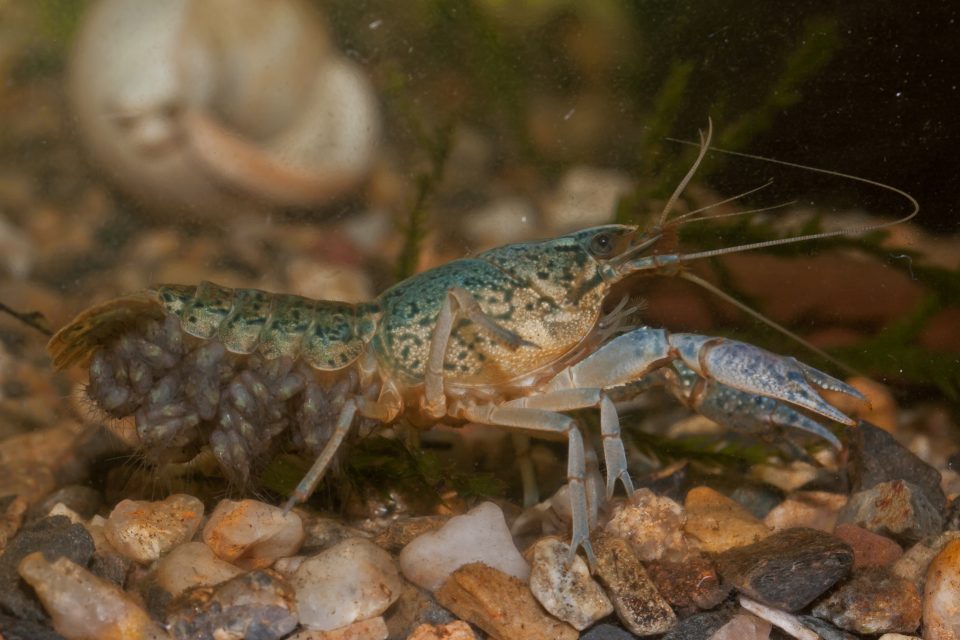 The strange problem of the self-cloning crayfish

The scientists who engineered the program that led to Sarah Manning and her clonal “sis-strahs” on the hit show Orphan Black have nothing on the marbled crayfish Procambaria virginalis. They may have managed to clone two lines of humans, but this species of crayfish is the only species of decapod crustacean to obligately clone itself. It appears to have developed this bizarre ability as a result of a genetic accident, possibly in captivity. And its strange reproductive talents—aided by careless humans—have resulted in crustacean invasions on three continents.

The best evidence shows that the story begins in 1995. A German aquarist and biologist purchased a bag of what he was told were “Texas crayfish” at an aquarium show in Frankfurt. He soon found that the specimens that he purchased did not require males to breed, and were instead parthenogenetic. That is, the all-female population created viable eggs without sperm from a male.

Though parthenogenesis occurs in some lower species of crustacean, such as Daphnia, it is nearly absent from the 15,000 species of decapod crustaceans, which include shrimp, lobsters and crabs as well as crayfish. Several other species of crayfish appear to be facultatively parthenogenetic. That is, they may clone themselves under certain circumstances. But P. virginalis appears to be the only obligate cloning species. It cannot reproduce in any other way.

By 2003, the so-called  “marmorkrebs”—German for “marbled crab,” after their marbled coloration—were no longer just an aquarium novelty. They had found their way into German waterways. A free-living population was discovered in southwestern Germany, presumably introduced by an overwhelmed hobbyist who did not know what to do with a tank full of crayfish that kept replicating themselves like mogwais under a sprinkler.

Following this alarming revelation, intensive studies were initiated in an attempt to isolate the origins of these insidious creatures. They are believed to be an aberrant form of a U.S. species native to Florida and southern Georgia, the slough crayfish, Procambarus fallax—not Texan at all. Genetic analysis has confirmed their relation and in fact, slough crayfish will mate with marbled crayfish in captivity. It just doesn’t do any good. The slough crayfish, which reproduces sexually in the wild, cannot successfully pass its genes along to the marbled crayfish. The marbled species already has more than enough of them.

Unlike most animals, which are diploid, meaning that they possess two sets of chromosomes, one from each parent, the marbled crayfish is triploid. It possesses three sets of chromosomes, totalling 276. Two sets of 92 appear relatively identical and the third is slightly different. This may have occurred due to a mutation in which one parent passed down two sets of chromosomes instead of one or may have happened as a result of temperature shock in the egg stage, which can cause autotriplody. The species possesses 3.5 billion base pairs, making it larger than the human genome according to a recent study, the first to sequence a decapod crustacean genome.

Some have questioned whether this unique genetic status actually constitutes an incidence of speciation or not. P. virginalis does not occur in the wild—introduced or otherwise—in the U.S. And it cannot interbreed with P. fallax despite its possession of a similar genome. Yet, P. fallax is clearly the parent species and the two are nearly indistinguishable side by side. It has been proposed that epigenetic adaptations have allowed the marbled crayfish to expand beyond its parents’ balmy range into the more temperate climes of Europe.

This geographic separation and the inability to breed with the parent species do seem to support the notion that P. virginalis has in fact speciated. Whether a true species or not, its clonal habits should, at least per some versions of evolutionary theory, put the marbled crayfish at a disadvantage. It should be less able to adapt to disease and other environmental pressures due to its lack of genetic variation. Yet, its epigenetic capabilities have so far defied this rule of evolution. In fact, despite its genomic similarity, the marbled crayfish has demonstrated remarkable phenotypic variation, with different sized and colored specimens being found in different areas.

This evident flexibility has allowed the marbled crayfish to spread rapidly in the three decades since its introduction into the wild. Crayfish are omnivorous and eat voraciously, consuming anything from smaller fish, invertebrates, and their eggs to plants and debris. Their flexible diet makes them a prime candidate for invasion of new territories. The additional reproductive capacity of this species further increases its invasive potential.

Over its three year lifespan, it may produce some seven batches of eggs, each containing hundreds of clones. The marmorkreb is now found in Sweden, Ukraine, Estonia, Croatia, Hungary, Italy, and the Czech Republic as well as in Germany. And populations have been found in Japan and Madagascar as well. These introductions, like any species invasion, are alarming for a number of reasons. In Europe, they may herald the out-competition of native species and the transmission of Aphanomyces astaci, known as crayfish plague.

North American species are resistant to the pathogen, but it can devastate populations of crayfish in other parts of the world. Madagascar, a delicate island ecosystem already under threat, has seven native species of crayfish that may be quickly displaced by the rapidly reproducing marmorkrebs.

The European Union banned their sale and keeping in 2014, with exceptions for research. This research may be the saving grace of an otherwise pestilent species. Scientists have begun using the marbled crayfish as a model organism and have even used its epigenetic plasticity as a way of understanding cancer cells, which also survive by switching on and off various parts of the genome.