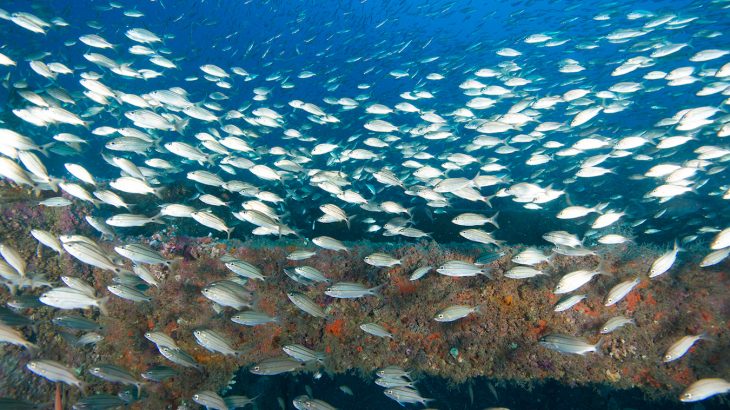 Tropical fish off the coast of North Carolina are using shipwrecks as reefs, preferring artificial structures to natural rocky reefs.

Many species like tropical fish are on the move in search of more hospitable habitats due to warming temperatures linked to climate change.

Shipwrecks and other sunken objects work as artificial reefs that fish are using as stepping stones in their northward migration as they travel beyond their typical geographic range.

Researchers from Duke University suggest that artificial reefs like shipwrecks will house more and more tropical fish in the future as climate trends continue to warm tropical marine habitats.

In a new study published in the journal Nature Communications Biology, the Duke researchers show that tropical fish populations have increased off the coast of North Carolina in recent years and these fish flock to artificial reefs rather than natural ones.

“Globally, there is broad evidence that many tropical fish species are shifting their ranges poleward and to deeper waters in response to changing ocean conditions, and what we see on these reefs seems to fit that pattern,” said Avery B. Paxton, the lead author of the study.

Subtropical fish exhibit a clear preference for artificial reefs as the researchers found and this could be because shipwrecks and human-made structures offer more hiding places to evade prey or attract abundant sources of zooplankton and food.

A team of scuba-divers conducted population and species counts at 30 artificial and natural reefs off the coast of North Carolina between 2013 and 2015.

The counts were done four times a year to track population changes and see if seasonal changes impacted population numbers.

Not only were there more tropical and subtropical fish near deep artificial reefs, but the researchers also recorded a greater diversity in fish species.

“We didn’t see these patterns on artificial reefs at shallow or intermediate depths, we only saw them on deep reefs, located between 80 to 115 feet below the surface, where water temperatures often experience less seasonal change,” said Paxton.

Shipwrecks and sunken structures which are common in oceans worldwide may soon become hotspots for migrating tropical and subtropical fish, according to the study.