Balloons pose a serious threat to the environment. But what about sky lanterns? • Earth.com 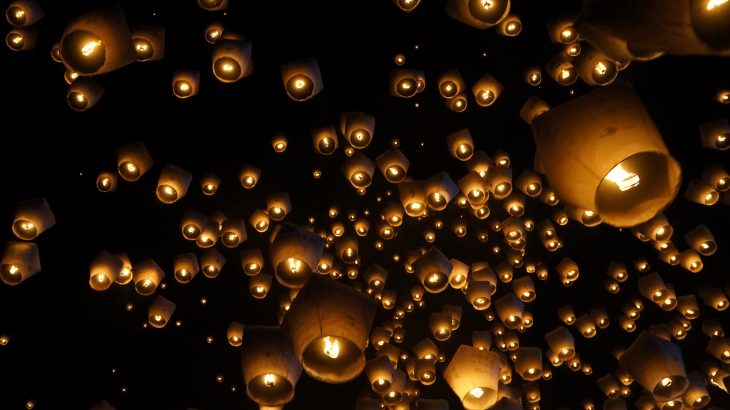 Balloons pose a serious threat to the environment. But what about sky lanterns?

First it was plastic straws. Now balloons are quickly gaining public ire due to their environmental impacts. Sky lanterns are a natural alternative to balloons, yet there has been little focus on their effect on the environment.

Balloons can cause vast damage to an ecosystem once released. Not only do balloons contribute to our pollution crisis, but wild animals may mistake balloons for food and ingest the material. The balloon can then block the animal’s stomach resulting in a slow death by starvation. Turtles are especially susceptible to this as balloons floating in water look eerily similar to jellyfish. Wildlife also risk becoming entangled in the strings of the balloon.

Balloon releases were once an exciting public spectacle. Many other balloons are also accidentally released into the environment with the slip of a hand.

This balloon pollution quickly adds up. During a 2016 international beach clean-up event, enough balloons were collected to lift a 2,200 pound walrus off the ground.

At least five states have laws cracking down on balloon releases, according to Balloons Blow, a non-profit that educates the public on the destructive effects of balloons.

While opposition to balloon releases grows, the effects of releasing sky lanterns is often left out of public discourse. Although sky lanterns have a smaller impact on pollution than balloons, the lanterns pose a unique threat due to their fire hazard.

Sky lanterns propel off the ground through a small fire that is ignited at the bottom of the lantern. The lanterns therefore could damage ecosystems, wildlife and human health if the flame touches the ground and starts a fire.

In 2011, a sky lantern caused a wildfire that burned 800 acres in Myrtle Beach, South Carolina.

Farmers have also expressed concerns that the lanterns threaten their livestock through ingestion and entanglement but this phenomenon has yet to be assessed in depth.

Despite the lack of attention on the environmental impacts of sky lanterns, their release has been regulated throughout the world, including in Austria, Brazil, Costa Rica and Germany. In the United States, at least 17 states have banned them.

The sky lantern industry has worked to address environmental concerns by replacing metal wires with non-flammable strings and using rice paper and bamboo. These sky lanterns are often advertised online as “eco-friendly”.

Not all environmentalists are convinced. Balloons Blows warns that even “eco-friendly” sky lanterns are an unsafe alternative as they still present a fire hazard.

Releasing a fire into the environment certainly comes with its risk, yet the full scale of this problem is still up in the air.