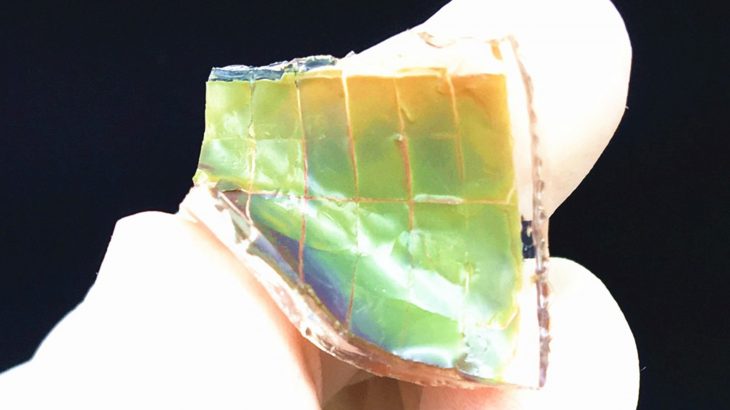 Researchers at the American Chemical Society have created a flexible smart skin that changes color when exposed to heat and sunlight. According to the experts, the new material could ultimately find applications in camouflage, signaling, and anti-counterfeiting.

Many studies have sought to replicate the camouflaging abilities of chameleons and other creatures, which can change colors through chromatophores found in their skin. The animals often use color changes to attract mates or to dodge predators.

The hues of the chameleon skin do not rely on pigments or dyes like most colors, but are controlled instead by the arrangement of tiny structures known as photonic crystals.

When light reflects off of these microscopic surfaces, it interferes with other beams of reflected light and produces a color. The shade of this color is altered when the distance between photonic crystals fluctuates, such as when a chameleon relaxes or tenses its skin.

For the current study, the scientists embedded photonic crystals in flexible materials like hydrogels. Next, the team managed to change their colors by contracting or expanding the material like an accordion. These abrupt changes,  however, often put too much strain on the materials and compromised their performance.

For the current study, a team led by Khalid Salaita set out to create a smart skin that was more flexible and resilient under changing conditions. The researchers studied time-lapse images of chameleon skin, and discovered that only a small fraction of skin cells actually contain photonic crystals, while the rest are colorless.

The experts theorized that the colorless cells may help ease the strain on photonic crystals as they contract and expand. For this reason, the team patterned arrays of photonic crystals in a hydrogel and then embedded these arrays in a second hydrogel that was designed not to change color, but to act as a supporting layer.

When heated, the new material changed color yet maintained its integrity and size. The smart skin also changed its color in response to natural sunlight.

The study is published in the journal ACS Nano.