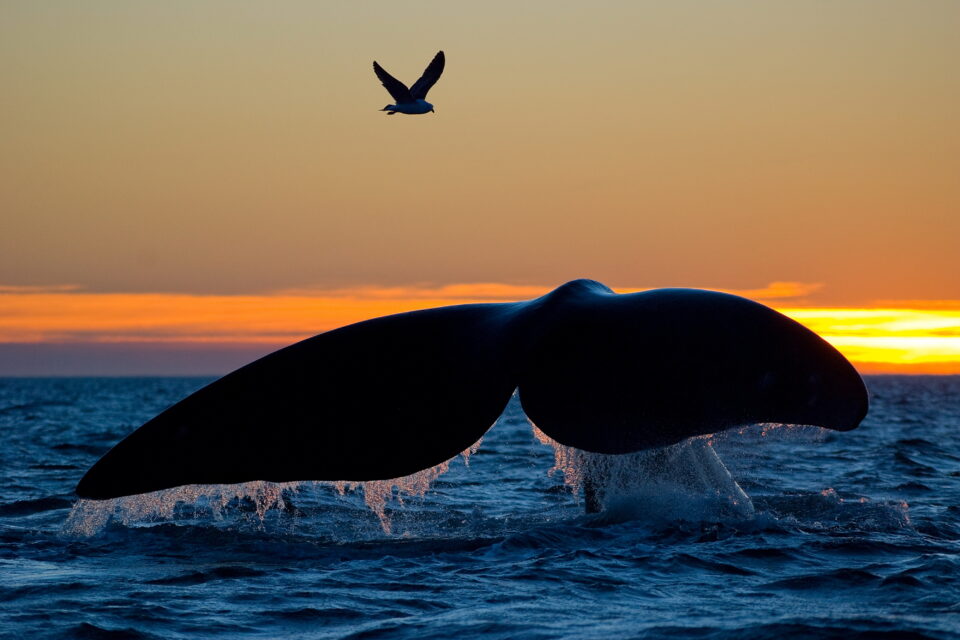 Southern right whales (Eubalaena australis) are native to oceans in the southern hemisphere and a breeding population exists around Aotearoa New Zealand and its sub-Antarctic islands. The whales, known locally as tohorā, used to be more common in the region, and are known to have come inshore in the past to use sheltered harbors for calving and mating. The large numbers that were present in earlier times were dramatically reduced by whaling activity and by the time the killing of this species was banned in 1937, southern right whales were almost extinct, globally.

As a result of the hunting, there was no sighting of a southern right whale for 35 years in the waters around mainland Aotearoa New Zealand, with the remnant population persisting only around the remote sub-Antarctic islands. However, by 2009 there were an estimated 2,200 of these whales in the region, indicating a slow but steady recovery in the population. Individuals move between mainland Aotearoa New Zealand, including Stewart Island (Rakiura), and the sub-Antarctic Auckland Islands (Maungahuka) and Campbell Island (Motu Ihupuku). Sightings are still very rare and may number no more than one or two in total, in some years.

A new study, led by Annabelle Cranswick of the University of Auckland, has made use of posts on Facebook and nature-watching network iNaturalist to bolster the data on whale sightings and help monitor the population of southern right whales in Aotearoa New Zealand waters.

By using sightings data from 2011 to 2021 recorded in the New Zealand Department of Conservation’s Marine Mammal Database, and supplementing these with crowd-sourced sightings reported on Facebook and iNaturalist, the researchers were able to increase the spatiotemporal extent of sampling for this rare and whale species.

“Photos supplied on social media and by citizen scientists are proving so important for us to monitor populations of these recovering whales,” said Cranswick. “We can assess that yes, this is a southern right whale, and discover how long a whale stayed in a particular area.

“Even a distant photo, showing just part of a whale, can be helpful,” says Cranswick. “We can pick a southern right from just the white patches called callosities on the head, their flat back which lacks a dorsal fin, or even their large paddle-shaped pectoral fins.”

In total, there were only 116 sightings of southern right whales in New Zealand waters from both the Department of Conservation and the social network sources, reported over the 11-year research period (2011–2021). Since all the social media sightings were accompanied by photos that enabled species identification, these posts increased the overall number and quality of sightings and provided new information on the fine-scale movement and residency times of the whales.

“We went through ten years of social media data to extract these sighting reports,” said Hannah Hendriks, a marine biologist with the Department of Conservation. “There are very few whale researchers and rangers scattered across the country, so we rely on the public to be our eyes and ears.”

Bobby Phuong, a mailman in Christchurch who’s an enthusiastic amateur wildlife photographer, shot one of the images to feature in the study. He drove for nearly an hour to see a whale and calf at Sumner in August last year, sharing his photos via Facebook. “They were remarkable to witness and I’m glad my photos have helped in some way,” he says.

In Gisborne, Wainui Beach resident Ian Ruru captured images of a southern right whale frolicking in the waves, meters away from surfers, in September 2018. “She sat directly in front of our home for eight hours that day … I guess she wanted her story to be told … Paikea we called her,” said Ruru.

The results of the analysis, published in the journal Ocean & Coastal Management, indicate that, although numbers of whales have increased slowly in the region during the study period, the numbers around mainland New Zealand have not grown in the past decade. The authors hypothesize that this may due to the loss of so many female whales during the time of whaling, that the collective memory about making use of the mainland waters has been lost.

This study highlights the way in which social media may be put to good use to supplement knowledge and data gaps in traditional ecological monitoring programs. Whales are charismatic megafauna that often appear on social network posts and are ideal for public outreach sightings data.

“Social media provided detailed information from areas with lots of people and lots of cameras,” said study co-author Dr. Emma Carroll. “Where there are fewer people, like the west coast of Te Waipounamu (the South Island), information from the public and Department of Conservation rangers recorded in the national database was more important,” she explained.

The researchers stress that, although photographs and sightings of inshore whales are invaluable sources of important data, would-be citizen-scientists are reminded that photographers must stay 50m from adult whales and 200m from whales with calves, so as not to disturb them.