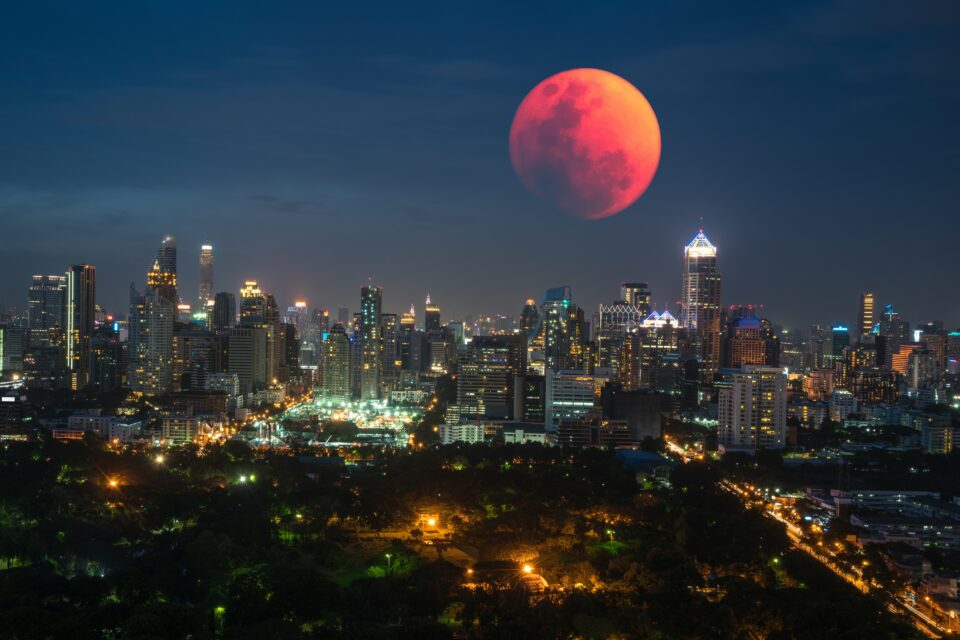 On Sunday, May 15, 2022, two rare moon events will take place at the same time. A total lunar eclipse will make the Earth’s natural satellite appear like a glowing red disk in the sky (hence the name “blood moon”), at the same time when the moon will be near to its closest orbit to Earth (or perigee), making it appear larger than usual. This Super Blood Moon will be visible in its totality phase from parts of the Americas, Europe, Africa, Antarctica, and the east Pacific.

The moon will start taking on a light tea-colored hue at around 22:00 ET on Sunday, and will be fully eclipsed by 23:29 ET. This phase will last until 00:54 ET, making it the fifth longest total lunar eclipse of the 21st century. The entire phase of totality will be visible in all of South America and most of North America, as well as in some parts of Europe and Africa. In some areas of the Pacific Northwest, the already-eclipsed moon will rise immediately before the sun sets, brightening as it climbs into the night sky.

The red coloring of the eclipsed moon occurs because sunlight hitting the moon is filtered through the Earth’s atmosphere, scattering the blue light and letting the red one pass through. It is a similar phenomenon with the yellow sun turning red during sunsets. “During a total lunar eclipse, the moon usually turns a deep, dark red because it is illuminated by light that has passed through the Earth’s atmosphere and has been bent back towards the moon by refraction,” experts from the Royal Observatory in Greenwich explained.

Unlike solar eclipses which require special equipment to observe safely, a lunar eclipse can be enjoyed without using any protective gear. While a pair of binoculars would allow stargazers to see an impressive amount of detail on the moon, a total lunar eclipse can be a spectacular view also for the naked eye, from any part of the world where the eclipse is visible.

During the totality phase, the sky surrounding the moon will appear much darker, revealing nearby bright stars, such as the orange-colored star Antares. Sky-watchers in areas away from light pollution may even manage to spot the glow of the Milky Way during this amazing eclipse.

People who live in parts of the world where the eclipse will not be visible can still enjoy it on a variety of live online streams. Some of the links which will be broadcasting this celestial event are available here.