Sponges “sneeze” to get rid of unwanted waste • Earth.com 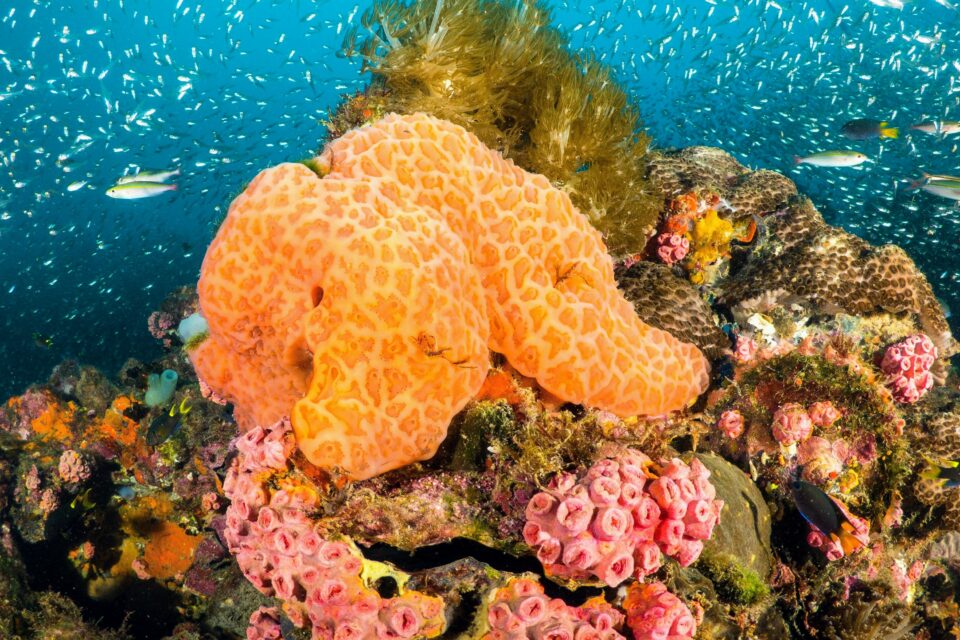 Sponges are ancient filter-feeding animals that rely on maintaining a flow of water through their bodies to obtain suspended food and dissolved oxygen. They do not have a nervous, digestive or circulatory system, and remove waste products by releasing them into this same flow of water. However, a new study that analyzed videos of sponges over extended time periods has identified a special technique that they use to get rid of unwanted material from inside their bodies.

As one of the oldest multicellular organisms in existence, a sponge spends most of its life stuck to the substratum and cannot move away when conditions become unpleasant. Under these circumstances it may take in unwanted particles of sediment with its constant inflow of water. These waste particles would soon clog up a sponge’s filtration system and so they need to be removed. And the sponge does this by undergoing an extended contraction, referred to as a “sneeze.”

“Our data suggest that sneezing is an adaptation that sponges evolved to keep themselves clean,” said study senior author Jasper de Goeij, a marine biologist at the University of Amsterdam.

While biologists have known about the contraction behavior, the authors of this paper show that these sneezes get rid of materials the sponges cannot use. “Let’s be clear: sponges don’t sneeze like humans do. A sponge sneeze takes about half an hour to complete. But both sponge and human sneezes exist as a waste disposal mechanism,” says de Goeij.

The researchers used time-lapse videos of sponges to show that these organisms do not simply dispose of waste and unwanted particles with water that flows away through the outlet pores. They actively secrete mucus, often against the direction of water flow, onto their outer surfaces. They then expel unwanted particles through their pores and these become aggregated in the stringy clumps of mucus. Every now and then, the sponge goes through a contraction (sneeze) that loosens the strings of mucus and accumulated particulate matter, dispatching them into the water column.

What is a sponge’s waste is a fish’s windfall. Fish hang around the sponges waiting for these strings of mucus to be shed so that they may eat them.

“We also observed fish and other animals feeding off of the sponge mucus as food,” explained study first author Niklas Kornder. “Some organic matter exists in the water surrounding the coral reef, but most of it is not concentrated enough for other animals to eat. Sponges transform this material into eatable mucus.”

The researchers noted this “sneezing” behavior in two species of sponges, the Caribbean tube sponge Aplysina archeri and another Indo-Pacific species of the genus Chelonaplysilla.

“We actually think that most, if not all, sponges sneeze. I’ve seen mucus accumulate on different sponges while diving and in pictures taken by other scientists for other purposes,” said Kornder.

“Our findings highlight opportunities to better understand material cycling in some of the most ancient Metazoans,” wrote the study authors.

There are still many aspects about sponge “sneezes” that remain to be investigated. “In the videos, you can see that the mucus moves along defined paths on the surface of the sponge before accumulating. I have some hypotheses, but more analysis is needed to find out what is happening,” said Kornder.

“There are a lot of scientists that think sponges are very simple organisms, but more often than not we are amazed by the flexibility that they show to adapt to their environment,” said de Goeij.

The study is, published in the journal Current Biology.