Star-nosed moles might be the most interesting mammals on Earth • Earth.com 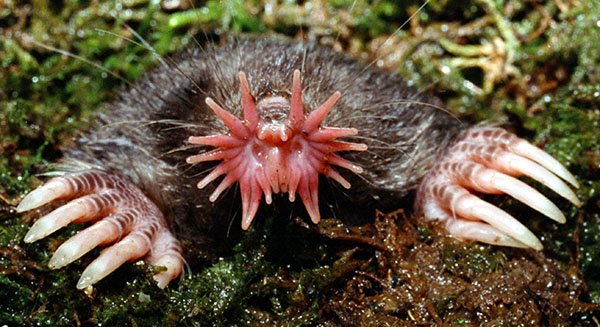 Star-nosed moles might be the most interesting mammals on Earth

The star-nosed mole is one of the more bizarre-looking creatures to inhabit this planet, and after decades of research on this species, scientists have uncovered many unique traits to go along with its unique face.

For example, star-nosed moles eat faster than any other mammal on the planet. They can identify and eat food – which mainly consists of bugs – in less than two-tenths of a second. They only take 8 milliseconds to decide whether an object is edible or not, essentially making them a furry bug vacuum.

What allows them to make these identifications so rapidly is the extremely efficient operation of their nervous system. Researchers have found that the star-nosed mole’s neurons fire information from the environment to the animal’s brain at speeds approaching the physiological limit in organisms.

The star on their nose is ground zero for this fantastic nervous system. It happens to be the most sensitive touch organ known in any mammal, containing more than 100,000 nerve fibers – which is five times the number of “touch” fibers in the human hand. “The star skin is so sensitive that we have not been able to determine the lowest threshold for activating neurons,” says Kenneth Catania of Vanderbilt University.

In fact, from a neurological perspective, their sense of touch is strikingly similar to our sense of sight. The center of the star organ contains a small area called the touch fovea, which the mole relies upon for extremely detailed exploration. The touch fovea is neurologically organized in a way that almost mirrors how our visual system is organized. “These parallels suggest there are common strategies by which evolution ‘builds’ high-resolution sensory systems, whether they are based on sight or on touch,” explains Catania.

These crazy creatures are also the only known mammals that are able to smell underwater. They often dive and swim for their food, blowing bubbles into the water and re-inhaling them through their nose in order to smell for prey.

All of these unique facts are what set star-nosed moles apart from almost any other mammal on Earth. Further research into their unique nervous system may also help increase our understanding of how our own nervous and visual systems work. While this species may not win any beauty pageants, it seems to be more than happy just eating bugs at supersonic speed.