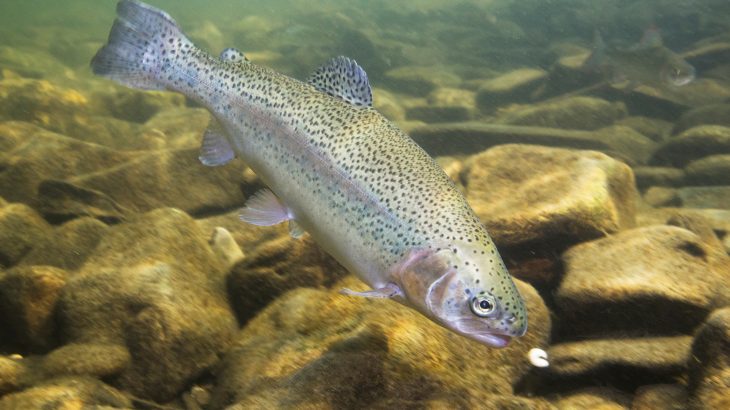 Researchers at the University of Cincinnati are shedding new light on the behavior of an endangered fish in California. The study suggests that steelhead trout do not rely on environmental cues to decide when to migrate, but instead listen to their internal clock.

Professor Michael Booth has been studying the migration patterns of steelhead trout, a subpopulation of rainbow trout,  that make their way to the Pacific Ocean to hunt and feed until they return to freshwater streams to spawn.

While working at the United Water Conservation District, Professor Booth set out to investigate which factors drive steelhead trout to make the trip to the Pacific Ocean. He based his analysis on 19 years of records from a designated fish trap on southern California’s Santa Clara River. The trap is part of a diversion off the river where fish can be counted and relocated downstream when necessary.

Professor Booth found that steelhead trout migration was triggered by more hours of daylight in the spring rather than by environmental factors like precipitation.

The Santa Clara River is one of the largest coastal watersheds in southern California, but sections of the river often dry out completely. This isolates some fish in upstream tributaries until the seasonal rains return.

“The Santa Clara River is a massive desert river,” said Professor Booth. “The river channel is braided with sand and gravel. It’s about 1,000 feet wide in its lower sections and it’s always changing.”

Some trout remain in cold-water mountain streams throughout their entire lives, spawning and dying close to where they hatched. Meanwhile, others experience physiological changes that allow them to tolerate the salty water of the Pacific Ocean.

Professor Booth explained that there are great genetic benefits to making the dangerous trip to the Pacific Ocean. For example, steelhead trout grow much faster in the ocean compared to trout in freshwater streams. He added that steelhead trout have the advantage in passing on their genes to subsequent generations when they return to spawn.

“A 3-year-old resident trout might be a foot long, but a steelhead might be 3 feet long. Their fecundity is directly related to size. So the bigger the fish, the more eggs it can make. There’s a really strong genetic advantage to making more babies.”

The study authors recommend limiting the extraction of water from the Santa Clara River during the migration months of mid-March to May. In addition, Professor Booth said the water flow in the river should be maintained to allow late migrating steelhead to return upstream. The opportunities for trout to migrate may become further limited due to climate change.

“There are a lot of challenges in the Santa Clara River. The water levels go up and down. This river has a massive sediment load. During a big storm, the river bed can erode 20 feet. The water looks like a smoothie coming downstream.”

Professor Booth said steelheads likely wait for sediment-choked river water to settle before migrating. He theorized that heavy rains triggered the steelhead’s movement to the ocean, since this would get the water flowing again.

The study is significant because it could inform decisions about water use. Knowing what months are crucial for steelhead migration could help wildlife managers avoid conflicts. “It’s really hard for a water manager to decide this is when we can and can’t divert water if you have no data on when the fish are migrating.”

For fish that miss the narrow window to navigate the Santa Clara while it’s running, there are few practical solutions, said Professor Booth.

“This is a very wicked problem. The water available is dependent on rain, snowfall and the recharge of the groundwater,” he said. “We can avoid taking water from the river or reducing extractions but there isn’t an extra water source to make the river flow during droughts.”

According to Professor Booth, steelhead trout will persist in the Santa Clara River, at least for now. “Steelhead are very resilient. They’ve been holding on for a while.”

The study is published in the North American Journal of Fisheries Management.