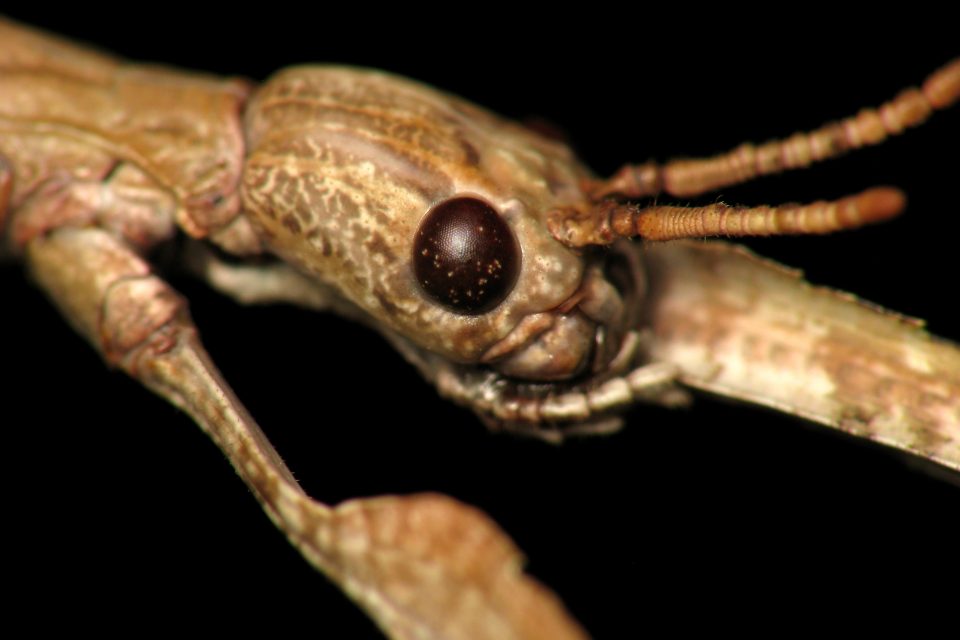 Hidden in plain sight are a group of insects that, for all of their cryptic inclinations, like to dance. Many of the 3,000 species of the order Phasmatodea—commonly known as stick and leaf insects—add to their already spectacular camouflage by swaying to mimic the movement of vegetation in the breeze.

There have been reports of multiple insects swaying together in a silent disco of sorts, like rejected backup booty from the dance scene in Labyrinth. Far from a leisure activity, this entomological choreography likely assists them in blending in with their leafy homes and avoiding predation, a theory corroborated by a 2016 study.

It’s been a successful strategy: these enigmatic creatures have adapted to forests and grasslands on all continents but Antarctica, though they are most abundant in the tropics. From the massive two-foot long Phryganistria chinensis Zhao, the longest insect in the world, to the tiny, half-inch long Timema cristinae, they are a remarkably diverse group.

Some are flattened and foliage-like, even sporting blemishes and holes that mirror the imperfections of real leaves. Others are whip-thin and stick-like. While most are shades of green and brown, a few, such as the Malagasy species discovered in 2019, are brilliantly colored. Flight capabilities vary as well: there are winged species and species that are wingless and earthbound. 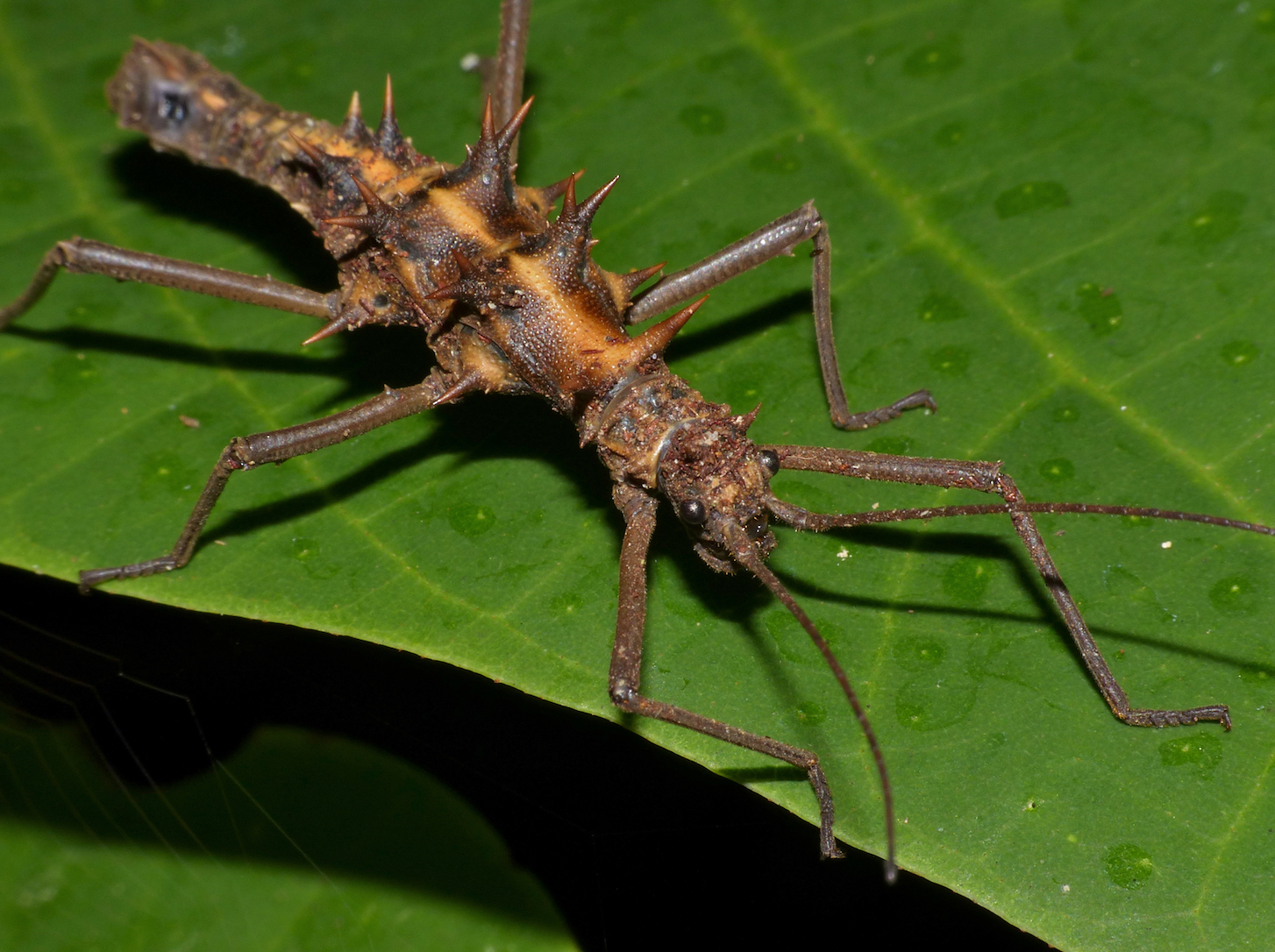 While their visual dissimulation and largely nocturnal habits are enough to protect them from most predators, their juicy bodies make them prime prey. Sometimes blending into the background just isn’t enough. Luckily, they have other tricks up their skinny sleeves. Many will drop to the ground when threatened, blending in with dead vegetation, sometimes after having startled their antagonist with a flash of spectacularly patterned wings.

Most are autotomous—capable of shedding limbs—leaving attackers to content themselves with a chitinous and unappetizing leg. Individuals that have not yet fully matured can regrow them with the next molt, though they are smaller. Occasionally, adults that would not otherwise molt do so in order to regenerate a limb as well. And many can slime their enemies with pungent hemolymph—blood—ejected from specialized orifices in their joints or spray them with a chemical deterrent.

Their reproductive habits may also contribute to their ubiquity. A number of species are parthenogenetic—that is, females can produce offspring without mating. Some let their eggs drop randomly, allowing them to be found by foraging ants. Because the eggs possess a fatty nodule that the ants can eat, they are transported back to their nests. Once the greasy treat has been consumed, the eggs themselves are discarded in the ants’ refuse pile—an unlikely place for most creatures to find a meal. There, they safely incubate and eventually hatch. And because phasmid eggs are uniquely strong due to the high content of calcium oxalate in the shells, some are able to hatch even if an egg-bearing female is eaten by a bird.

When their poor mother has been digested and excreted, a small proportion of the eggs survive and hatch. The parthenogenetic component of this process is important here. Many insects fertilize their eggs as they are being laid, making use of the sperm packet that they stored during mating. However, because some stick insects are capable of laying fertile eggs without mating, this process is unnecessary and even eggs that have not yet been laid make it through the digestive process. This unique adaptation may have facilitated their spread across the globe—like the seeds they resemble, the eggs are transported far and wide in avian bellies.

It is their appeal to avian predators that led to the rediscovery of the Lord Howe Island stick insect (Dryococelus australis), thought to be relegated to an island off of Australia. This massive, black phasmid was believed to have been wiped out soon after a shipwreck introduced rats to its home in 1918. Rats, being generalist predators, have ravaged the wildlife of numerous islands and Lord Howe was no exception. However, in 1964, climbers found a dead specimen on Balls Pyramid, a precipitous volcanic islet southeast of Lord Howe. Several years later, more dead ones were found at the peak. They are thought to have been deposited there by seabirds. 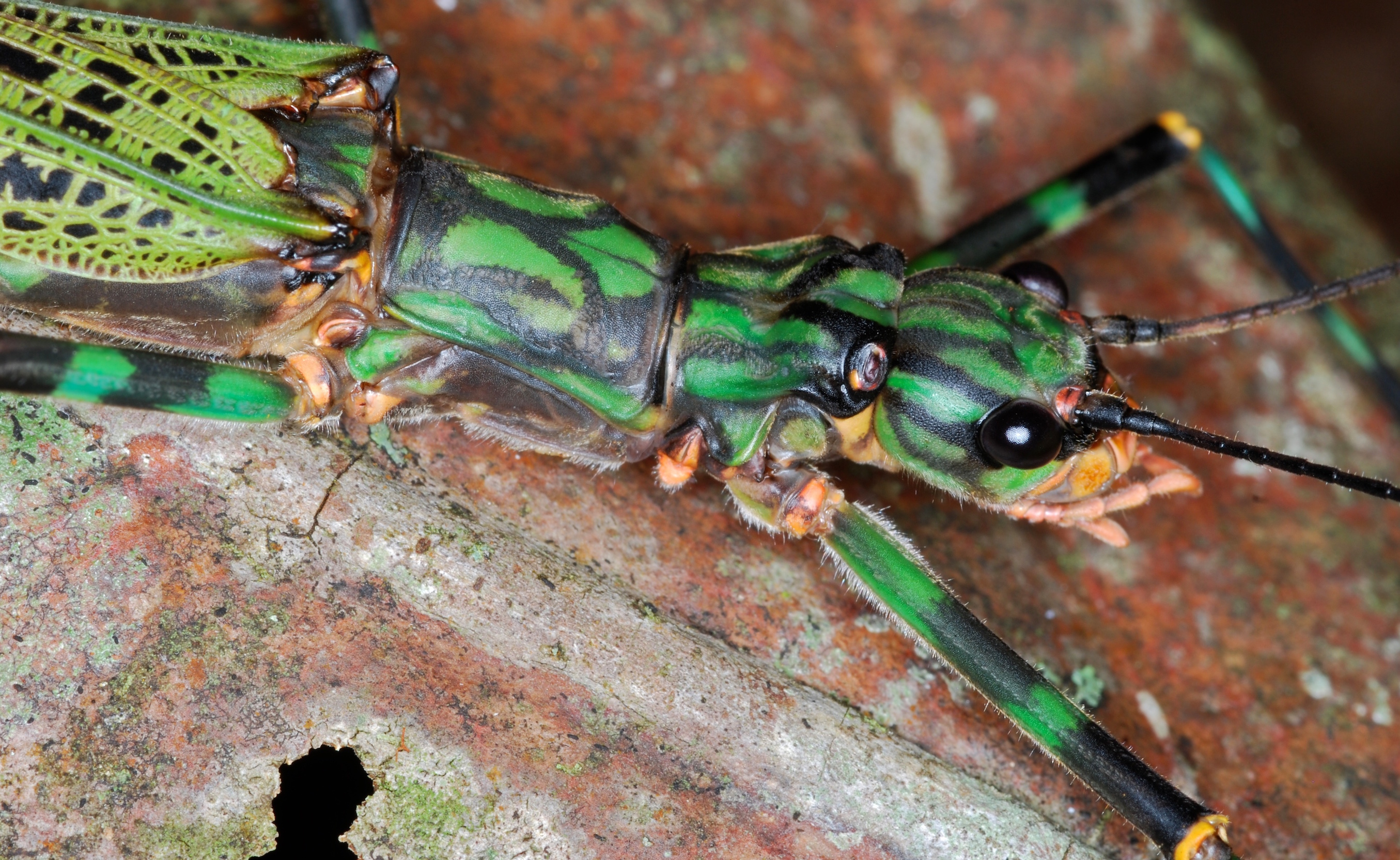 It was not until 2001, however, that living stick insects were discovered on the remote volcanic peak. Due to slight morphological differences between these specimens and preserved ones from the original Lord Howe Island population, it was suspected that these might be another species. However, genetic analysis proved that they were likely the same. Thought to be among the rarest animals on Earth, they are now being reared in zoos.

Despite their cosmopolitan distribution and impressive size, little is known about the habits of many phasmid species—even diet and mating habits are obscure. Males of some species have never been seen. Their Delphic existence is, appropriately enough, reflected in their nomenclature, which derives from the Greek for “phantom.” In Māori mythology, the presence of stick insects—associated with the forest god Tāne indicated that one was traversing a holy site and when they landed on a woman, it was believed she was pregnant. Guillermo del Toro’s film Pan’s Labyrinth features a fairy who disguises itself in stick insect form.

These numinous associations speak to the imaginative power of these strange and otherworldly beasts. The inanimate made animate, they are among the closest things we have to the fantastical inhabitants of fairy tales—talking clocks and flying carpets. The walking sticks and leaf insects, enchanting as they may be, are, however, utterly practical. Their dances and masterful disguises are the products of an evolutionary arms race, a desperate bid to avoid being devoured.