Where did all of these stink bugs come from? • Earth.com 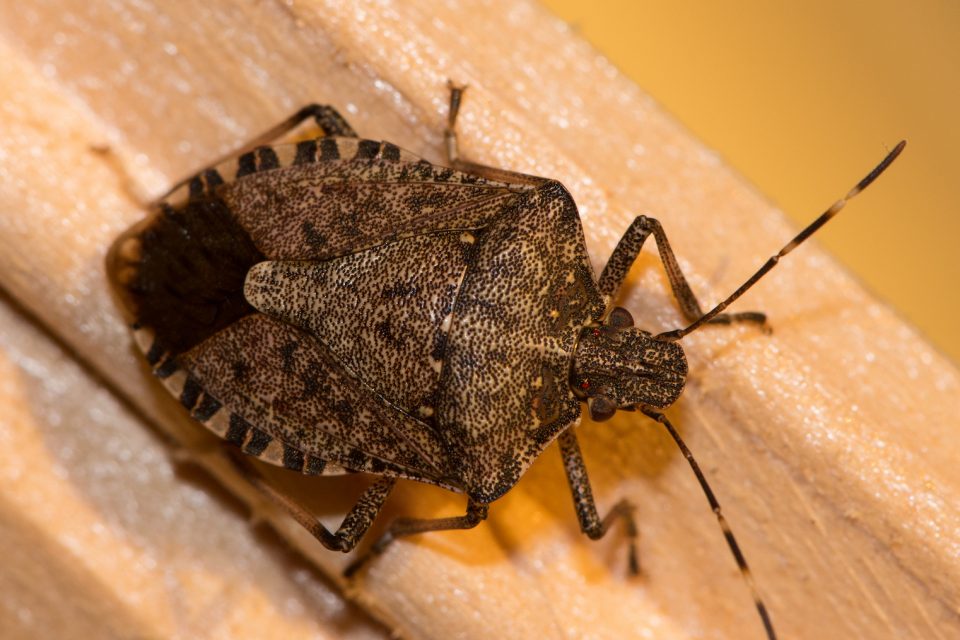 Where did all of these stink bugs come from?

They’re not quite zombies. They’re vegetarians. They make babies in the usual way … no unseemly gnawing of flesh necessary to spawn the next generation. Plants though? Well, those are fair game. Any hapless herbs unlucky enough to have eggs deposited upon them are goners. They are, in fact, utterly harmless to most animals, aside from an unpleasant taste if ingested. But homeowners and farmers in the United States might nonetheless be forgiven for making the comparison.

The bumbling incursions of the brown marmorated stink bug (Haly­omorpha halys) do almost resemble the mindless march of the undead. With a seemingly endless supply of footsoldiers, the species has trooped its way across the majority of America and made significant inroads in South America and Europe as well. And, as homeowners who have had their fortifications breached during hibernation season can attest, they’re undeterred by the defenses that might be deployed against most insect invaders. Pesticides have limited effect. Even swatting at them and sealing up their available points of ingress doesn’t stop them. They don’t seem to fear death. And they just keep coming.

These intruders have staged perhaps the most successful Asian conquest since Genghis Khan. And unlike the armies of Khan, they’re dormant for half of the year in colder climes.

They weren’t always botanical pillagers. They once lived in relative harmony with their fellow creatures. In their native Asia, where they range through China, Korea, and Japan, they are kept in check by parasitic wasps. While they are pests there, their depredations are not nearly so severe. It was when they voyaged across the Atlantic and settled in North America that their rapacious tendencies really blossomed.

They were first recorded in the United States in 1996, on Adams Island in Allentown, Pennsylvania, where they probably arrived in shipments from China. Further immigrants were noted in the Allentown area in 1998 and 1999. It wasn’t, however, until 2001 that the species was formally identified. That year, entomologist Karen M. Bernhard, who worked for the Lehigh County Cooperative Extension, was sent several specimens by homeowners. She shipped them off to the Cornell Univer­sity Insect Diagnostic Lab. There, it was confirmed that the species that had begun creeping into local homes was in fact the exotic brown marmorated stink bug, or BMSB. First identified by Western science in 1855, they are so named for their “marbled”—marmorated—brown exoskeletons and for the pungent aldehydes that they release when alarmed. 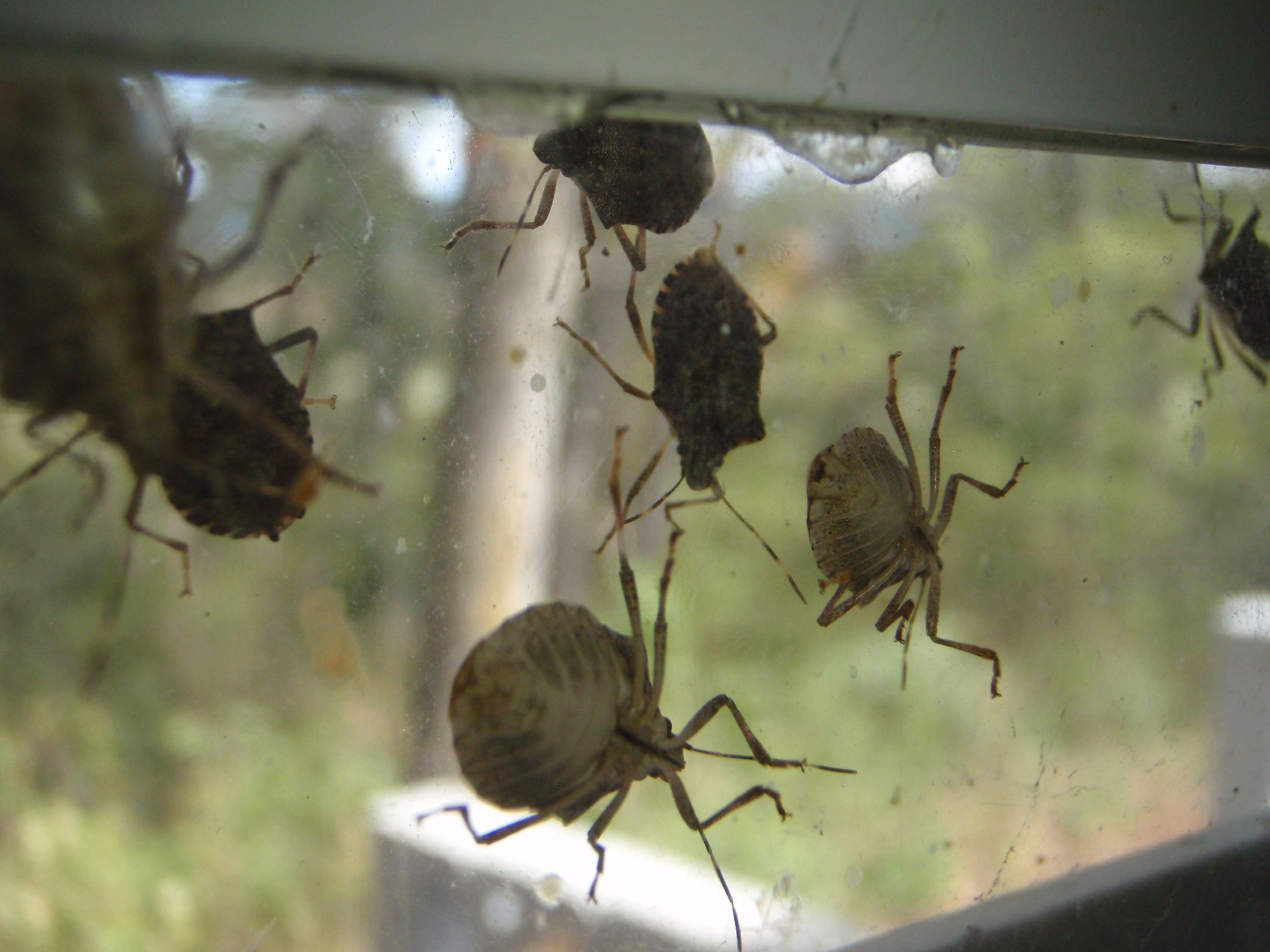 From Pennsylvania, the campaign rapidly proceeded to other states on the Eastern Seaboard. Currently, BMSBs are common east of the Mississippi. They spread to Oregon by 2004 and California by 2006, possibly as the result of separate introductions. The species is now established in 44 states and in four Canadian provinces. Genetic analysis has traced the American populations to Beijing, a major center of international commerce and thus a logical point of dispersal.

Because they overwinter, human habitations are a perfect respite for BMSBs that might otherwise be forced to crawl under tree bark and wait out the cold. The cracks and crevices afforded by your average home provide superior shelter. And because the insects secrete an aggregation pheromone, attracting droves of their brethren to appealing habitats, this means that thousands may come pouring into attics and other unsealed areas. (They are negatively geotactic—they prefer higher areas and thus gravitate towards the upper reaches of a given abode.)

Over this past Thanksgiving, I visited the uninhabited attic room in my childhood home and the floors were carpeted with dead stink bugs that had failed to make their way outdoors after their hibernations in previous years. And a living one took a nosedive into my dinner, presumably attracted to the light fixture above the table. Indeed, the creatures are also positively phototactic—that is, they are drawn to sources of light. This has proven to be a boon to those beset by swarms of the insects. They are not particularly susceptible to indoor pesticide applications, which, in any case, present risks to humans. One of the best ways to combat indoor infestations is to set up a pan of soapy water and put a light over it in a dark room. The creatures will swarm to the light and inadvertently drown themselves in the pan.

Farmers, however, are not so lucky. They usually must resort to more draconian measures, a distressing turn of events in an age where pesticide use is increasingly linked to all sorts of ecological problems, from the decline of beneficial insects to the poisoning of waterways. The generalist BMSBs feed on all sorts of crops and particularly afflict stone fruits, apples, corn, soybeans, and nightshades such as tomatoes. These insects caused $37 million in damaged to apple crops in the mid-Atlantic region in 2010 alone and other growers have also seen significant losses. The BMSB, which preferentially feeds on fruits, penetrates them with its sucking mouthparts, known as a rostrum, leaving wounds that affect the quality of the fruits. Some fail to develop around the area of penetration, leaving indentations known as “cat face.” Others form mushy or corky areas that make the fruits unsaleable. The creatures will also feed on other areas of plants and can even pierce the bark of some trees. Because the bugs are less susceptible to pesticides than other insects, applications must be heavier. Luckily, a number of solutions have gotten around that.

BMSBs appear to congregate on the perimeters of crop fields and orchards adjacent to forests. Thus, it may be more effective to treat those areas rather than the entire growing area. This effect can be amplified by the use of aggregation pheromone baits. The BSMB is drawn to pheromones released by its conspecifics. It loves a crowd and when it finds one, it excretes a substance that signals its satisfaction and attracts more. The application of artificial formulations of this pheromone can concentrate the invaders in specific areas, which can then be treated with localized applications of pesticides.

More effective, however, may be its natural predators, namely the parasitoid Trissolcus japonicus, colloquially known as the samurai wasp. This tiny winged assassin deposits its eggs inside stink bug eggs, where its larvae devour the developing embryos. Up to 90% of stink bug eggs are parasitized where the wasp’s range overlaps with that of the stink bug in their native habitat. Agricultural Research (ARS) scientists discovered the miniature wasp, hardly bigger than a period, in the stink bug’s native Asian range. They began conducting lab trials to see if the wasp would have deleterious effects on native stink bugs and other insects in introduced in the United States. (Given the disastrous effects of other introductions intended to control agricultural pests, such as the cane toad in Australia, such trials are essential in assessing risk.)

However, in 2014, it was discovered that the wasp had already colonized the United States on its own. They had been found in Maryland and soon turned up elsewhere, including British Columbia, Virginia, and New York, as well as Oregon and Washington. By 2017, they had popped up in Switzerland too, giving hope to afflicted farmers and gardeners in Europe. That year and the next, experimental populations of the wasp were released to determine their effects on the stink bugs. More wide-scale introductions await USDA approval. 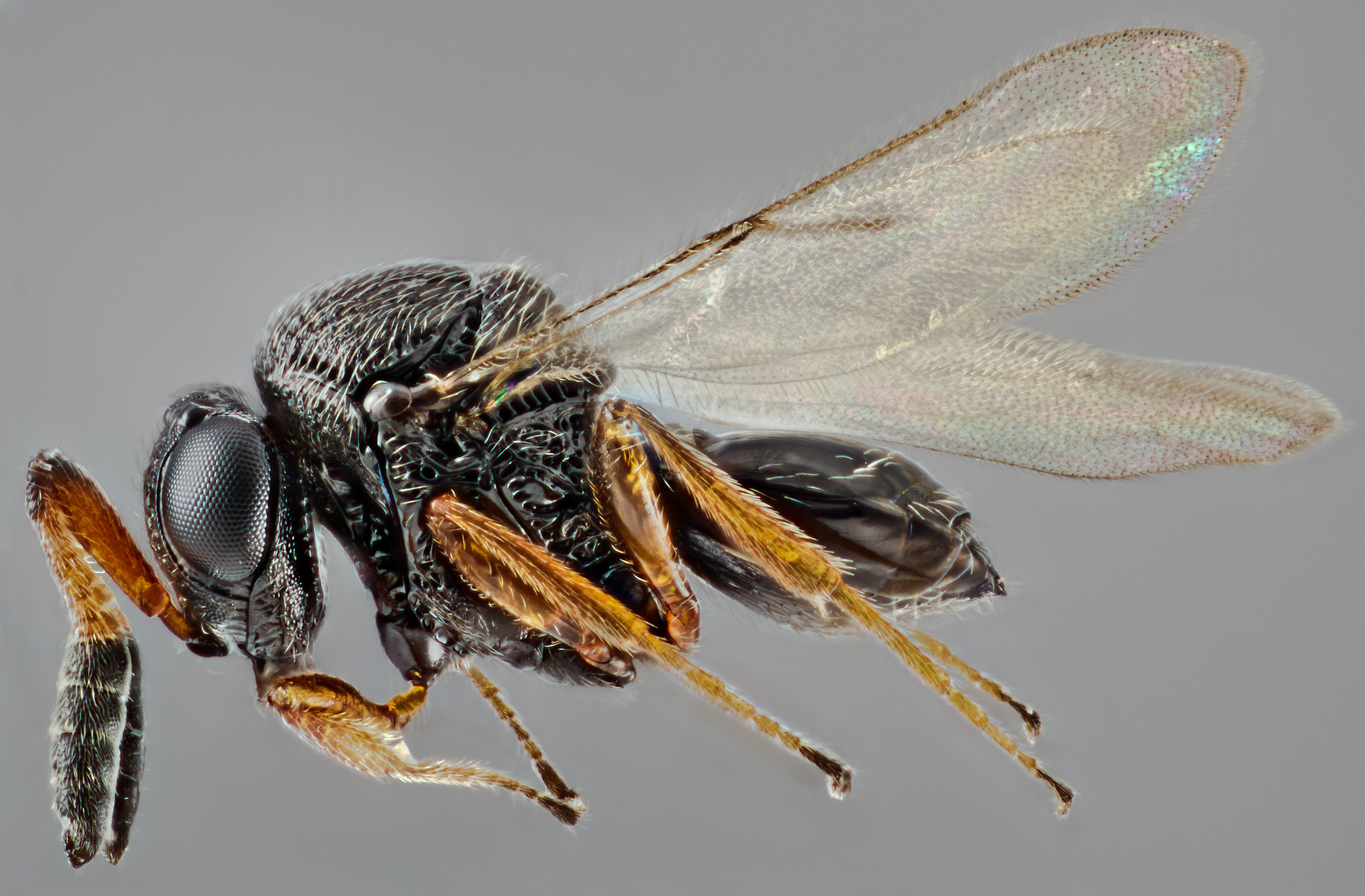 Predaceous insects native to or already well-established in North America may be having an effect as well. Praying mantises—originally from the BSMB’s native China—have been observed eating them and so have some spiders. Some birds, too, have been seen gobbling up them up. This may explain the fact that populations are declining in some of their East Coast strongholds. Cold winters, too, may have taken out some of the insect mercenaries. The polar vortex this year, which saw sub-zero temperatures, will likely prove to have been particularly devastating, at least to bugs that remained outdoors.

For now, though, the BMSB is still shambling its way across our fruited plains—and sucking the life out of them.