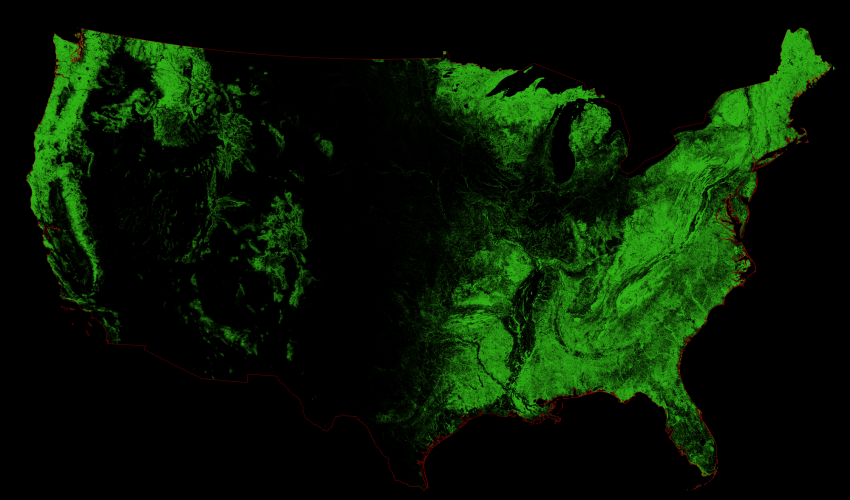 When you think about the greenest places on Earth, you might think of lush forests in northern California or Alaska. Vast stretches of forest cover both the east and west coasts, with particularly dense forests along the Great Lakes region.

The Eastern Deciduous Forest stretches from Florida to Canada, covers 26 states and spans ten different forest regions. On the west coast, there are similar vast stretches of forest that run from California to Canada.

The Earth is packed with dense greenery, but this isn’t readily apparent without a topographic map that highlights forest cover.

But now, a geographer has turned U.S. topography into works of art with forest cover maps showcasing the rich, green forests spanning the country.

Robert Szucs is a geographer and Geographic Information System (GIS) analyst with a love of maps who was inspired to showcase his work and studies by transforming it into posters. Szucs sells his work on his Etsy page.

One of Szucs’ creations shows long stretches of forest cover both on the East and West coast, with dense forests along the Great Lakes region. Running down the middle of the states is a black blank slate where desert and plains make up most of the land.

Szucs also has maps of the intricate river basins in the US and maps from all over the world including Germany, Italy, Sweden (one of the greenest in the collection), and population density heat maps of Europe and the US.

To create the forest cover maps and photographs, Szucs uses an open-source Geographic Information System (GIS). GIS is a computer system designed to show the spatial relations of objects and formations on the Earth’s surface. GIS can show multiple layers like road maps and forests on a single layer.

Scuzs then uses specific editing software to manipulate the images to create a specific effect or highlight particular layers. His work shows how varied and vast the Earth’s topographic natural makeup is, with swaths of forest and desert and rich veiny river systems.

The crossover between geography and art makes Szucs’ work accessible to a wide audience and beautifully displays the ingenuity of the artist.