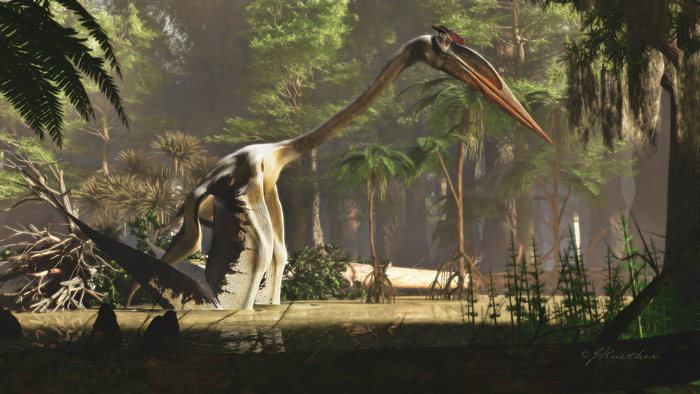 With a wingspan of almost 40 feet, the giant pterosaur Quetzalcoatlus is the largest known flying animal. However, since only a few fossilized bones were discovered in West Texas in 1971, how such a massive creature managed to fly has remained a mystery. A new research collection published by the Society of Vertebrate Paleontology provides the most comprehensive study of this dinosaur species yet, shedding new light on its habitat, morphology, and behavior.

“This is the first time that we have had any kind of comprehensive study,” said co-editor of the collection Matthew Brown, the director of the University of Texas at Austin’s Vertebrate Paleontology Collections. “Even though Quetzalcoatlus has been known for 50 years, it has been poorly known.”

The in-depth study of all confirmed and suspected Quetzalcoatlus bones led to the identification of two new pterosaur species, including a smaller one, with an 18-to-20-foot wingspan, which was named Quetzalcoatlus lawsoni, in the honor of Douglas Lawson, the geologist who discovered the bones in 1971.

While the larger species is known from only around a dozen bones, hundreds of fossils from the smaller species were discovered. This offered the scientists the possibility to reconstruct an almost complete skeleton and study the ways in which it moved and flew. Later on, they applied their insights to its larger cousin too.

“Pterosaurs have huge breast bones, which is where the flight muscles attach, so there is no doubt that they were terrific flyers,” said collection co-editor Kevin Padian, an emeritus professor and emeritus curator at the University of California, Berkeley.

Although scientists previously assumed that the pterosaur rocked forward on its wingtips like a vampire bat, or built up speed by running and flapping like an albatross, these new analyses suggest that it may have initially jumped at least eight feet into the air before lifting off by flipping its wings.

The researchers also found more details about these dinosaurs’ possible habitats and behaviors. While the larger Quetzalcoatlus might have lived like today’s herons, hunting alone in rivers and streams, the smaller species appeared to flock together in lakes with at least 30 individuals found at a single fossil site.

“Never before has so much detailed information on azhdarchids (the pterosaur family that includes Quetzalcoatlus) been gathered in the same place, this meaning that the work will serve as the standard go-to study of this group for years – probably decades – to come,” concluded vertebrate paleontologist Darren Naish.