The world’s only nocturnal hawk may not see well in the dark • Earth.com 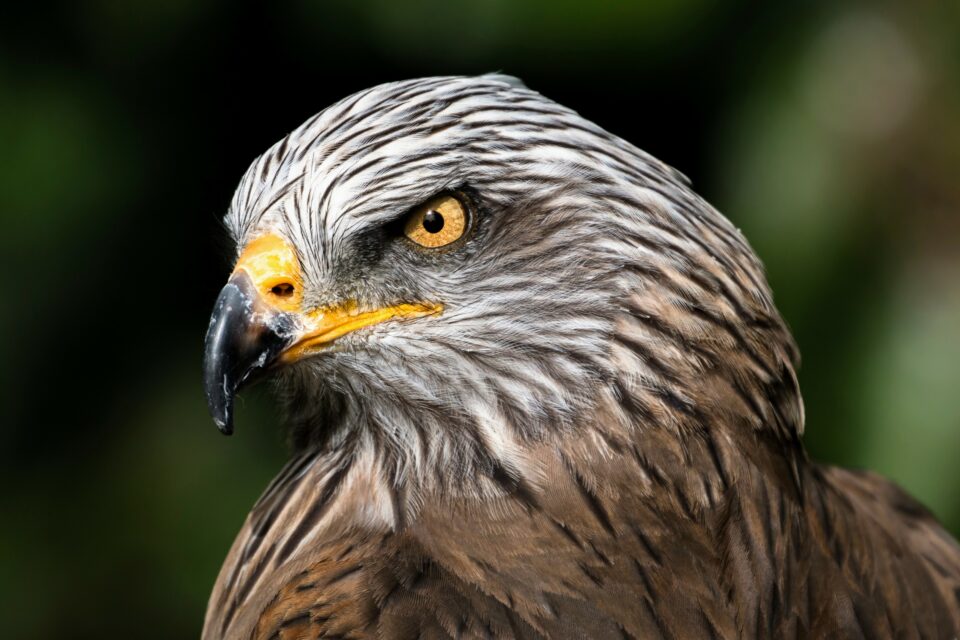 Birds that hunt their prey during the night need special adaptations in order to allow them to see in low light conditions and to judge the distance to obstacles in their flight path as well as the distance to their prey. Although these adaptations have been relatively well studied in nocturnal birds such as owls and nightjars, they have not been investigated in the world’s only nocturnal hawk, the letter-winged kite (Elanus scriptus).

Although some species of hawks (Accipitriformes) and falcons (Falconiformes) can hunt at dusk, the letter-winged kite is the only species that is primarily active at dusk and at night. It inhabits the arid central regions of Australia, avoiding settled areas and towns. This habitat preference, along with the species’ nocturnal activity pattern and nomadic movements, makes E. scriptus rather difficult to observe in the wild.

In the past, there has been speculation that the species is more like an owl than a hawk because it appears to have unusually large eyes that face forwards. Some have suggested that the soft tissues of the eyes resemble those of nocturnal birds more than diurnal species, including the other Australian Elanus species, the black-shouldered kite (Elanus axillaris).

Birds that hunt their prey during the night often show specialized adaptations to their visual systems and skeletons. These anatomical changes include large orbits to accommodate eyes with large retinas that contain many photoreceptors. The eye of a nocturnal raptor also usually has a relatively small optic foramen, the hole in the skull through which the optic nerve travels to the brain. Certain areas of the brain of a nocturnal raptor may also be enlarged to facilitate detailed processing and interpretation of the images received by the eyes.

An international study led by Flinders University has now tested the speculation about the letter-winged kite’s adaptations using computed tomography (CT) scanning techniques to obtain high-resolution images from three specimens, along with 27 other raptor skulls. The skulls, all of which were sourced from museums within Australia, came from 16 raptor species in total, 12 of which belong to the Accipitriformes (hawks, eagles and kites) and the remaining three to the Falconiformes (falcons). The images were used to measure and compare eye socket characteristics, such as the orbit diameter and the optic foramen diameter.

“Letter-winged kites hunt at night and must be able to navigate obstacles in the dark while tracking down their favorite prey, the long-tailed rat,” said Professor Vera Weisbecker. “It has therefore long been speculated that their visual system shows adaptations for seeing in the dark, and particularly that they are similar to owls in having larger eyes than other hawks, and larger image processing centers in the brain.”

Dr. Karine Mardon is an experts in The National Imaging Facility at the University of Queensland Centre for Advanced Imaging. Dr. Mardon scanned the skulls of the birds of prey included in the study, and the researchers then compared 3D reconstructions of the letter-winged kite skulls and brains with those of the other birds of prey.

The results of the analysis revealed that things are not as clear as night and day. There was no difference in the relationship between the orbit and optic foramen diameters for the nocturnal letter-winged kite and its diurnal congeners, the black-winged kite (Elanus caeruleus) and the black-shouldered kite (Elanus axillaris). Elanine kites, as a whole, seem to have relatively large orbit diameters, but relatively small optic foramina compared to other species.

“Contrary to many anecdotal reports, the dimensions of the eye of letter-winged kites were no different to two closely related kites from the same genus – the black-shouldered and the black-winged kites,” said study lead author Aubrey Keirnan, a PhD student in Dr. Weisbecker’s lab.

“But there was a twist in the story: we realized that all three kite species had larger orbits relative to their optic foramen, the hole in the back of orbit that the optic nerve passes through. This is often seen in nocturnal birds, where a small number of nerves relay a lot of input from the eye into a high-contrast, low-resolution image.”

“This suggests all Elanus kites may be pretty good at seeing in the dark and not too good at seeing in daylight – but for some reason, only the letter-winged kite has made the move into a nocturnal lifestyle.”

According to Dr Weisbecker, this might also explain many reports that the letter-winged kite is particularly active during moonlit nights: “It might not actually be very good at flying in the total dark, unlike many owls.”

The study was co-led by Dr. Andrew Iwaniuk from the University of Lethbridge in Canada. He noted that the use of anatomical observations to infer the species’ behavior was an innovative approach to understanding a bird that is notoriously difficult to observe in the wild.

“The species lives in remote, arid Australia, avoids human settlements and is highly elusive. Population estimates vary between 670 and 6,700 individuals according to the IUCN, and it is currently listed as near-threatened. To conserve the species, it is critical that we understand its behavioral needs and capabilities, but they are extremely difficult to observe,” said Dr. Iwaniuk.

“We are extremely lucky to have Australia’s amazing museum collections at our disposal to help us understand this bird without the need to find and disturb the species. For example, the letter-winged kite, and its relatives, might be impacted differently by artificial light sources than other hawks.”

Dr. Jeroen Smaers of Stony Brook University said the research perfectly exemplifies how studying variation across many species enlightens our understanding of individual species – an approach that is starting to show its contributions to animal conservation.

“Our work on the letter-winged kite is really just the beginning,” said Keirnan. “Our measurements showed that many other birds of prey are quite unique in one aspect or other of their visual system. I am excited to spend my PhD on delving further into how measurement of the visual system can help in the understanding and management of other birds.”