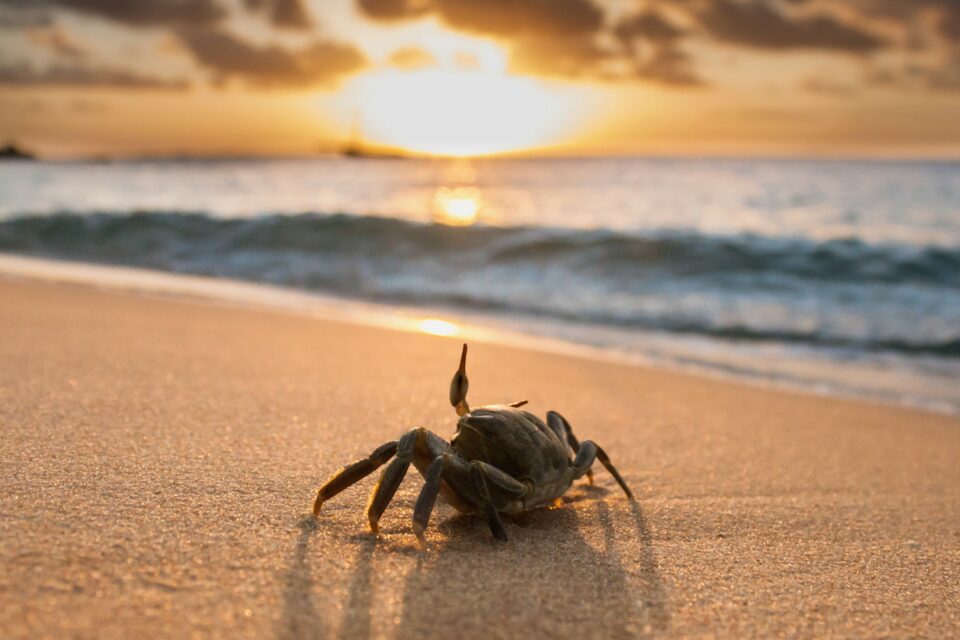 There has been a puzzling gap in our understanding of the evolutionary history of crabs on Earth. The oldest fossilized remains of land crabs, mostly pieces of claws, date to somewhere between 75 and 50 million years ago. But DNA analysis suggests that land crabs diverged from their marine ancestors more than 125 million years ago.

It was against this background that Javier Luque, a post-doctoral researcher in the Harvard Department of Organismic and Evolutionary Biology, became aware of an unusual specimen of a modern-looking crab that had been collected by local miners in Myanmar in 2015.  The specimen was suspended in fossilized amber and is currently housed at the Longyin Amber Museum in China.

Luque worked on the specimen for three years, starting in 2018. In collaboration with a team of international scientists, Luque reported the findings in the journal Science Advances.

The fossilized amber, which formed from the resin of an ancient tree, has been dated to 100 million years, making the tiny crab the oldest known fossil of a “true crab.” The crab is only 5 millimeters in size, and was walking along a tree trunk at the time it became engulfed in resin. It represents the oldest evidence of incursions into non-marine environments by true crabs.

“If we were to reconstruct the crab tree of life – putting together a genealogical family tree – and do some molecular DNA analysis, the prediction is that nonmarine crabs split from their marine ancestors more than 125 million years ago,” said Luque.

Moving from a marine to a nonmarine habitat involves many significant adaptations and has not happened commonly in most animal groups. The physical and physiological requirements for animals living in saltwater are different from those in fresh water, making invasion of terrestrial aquatic habitats very challenging. In addition, there are different predators and competitors in freshwater habitats.

True crabs, or Brachyura, are among the animal groups that have conquered land, brackish water, and freshwater multiple times over the history of their evolution, but the crab in amber gives evidence of the earliest land invasion made by the true crabs.

The researchers now believe that an event known as the Cretaceous Crab Revolution – when crabs diversified worldwide and started evolving their characteristic body forms – happened more times than previously thought. This new research brings the number of times that different crab species independently evolved to live outside their marine habitat to at least 12.

The new fossil was named Cretapsara athanata, meaning “the immortal Cretaceous spirit of the clouds and waters.” The name was given to honor its origin in the Cretaceous period as well as the South and Southeast Asian mythological spirits. The researchers say it is the most complete fossilized crab ever discovered.

The specimen was examined using micro-CT scans, that enabled the scientists to see extraordinary detail of the crab’s delicate tissues, including antennae, legs, mouthparts, compound eyes and gills. Based on the crab’s exceptional preservation in amber, and the researchers’ phylogenetic analysis, it has been placed in a new family with a unique mixture of primitive and advanced characters.

The study was a collaboration between Harvard and the China University of Geosciences, and included authors from 10 institutions including Yale University, Smithsonian Tropical Research Institution Panama, University of Alberta, UC Berkeley, Yunnan University, and the Royal Saskatchewan Museum.

The work is part of a larger National Science Foundation funded project with Javier Ortega-Hernández, an assistant professor in OEB and curator of invertebrate paleontology in the Museum of Comparative Zoology, Joanna Wolfe, a researcher in Ortega-Hernández’ lab, and Heather Bracken-Grissom from Florida International University, to investigate the evolution of crabs over 200 million years.

The authors acknowledge the socio-political conflict in northern Myanmar and say they have limited their research to material predating the 2017 resumption of hostilities in the region. They hope acknowledging the situation in the Kachin State will serve to raise awareness of the current conflict in Myanmar and the human cost behind it.

“They are all over the world, they make good aquarium pets, they’re delicious for those of us who eat them, and they’re celebrated in parades and festivals, and they even have their own constellation,” said Luque, who has been studying crab evolution for more than a decade.

“Crabs in general are fascinating, and some are so bizarre looking – from tiny little pea-shaped crabs to humongous coconut crabs. The diversity of form among crabs is captivating the imagination of the scientific and non-scientific public alike, and right now people are excited to learn more about such a fascinating group that are not dinosaurs. This is a big moment for crabs.”