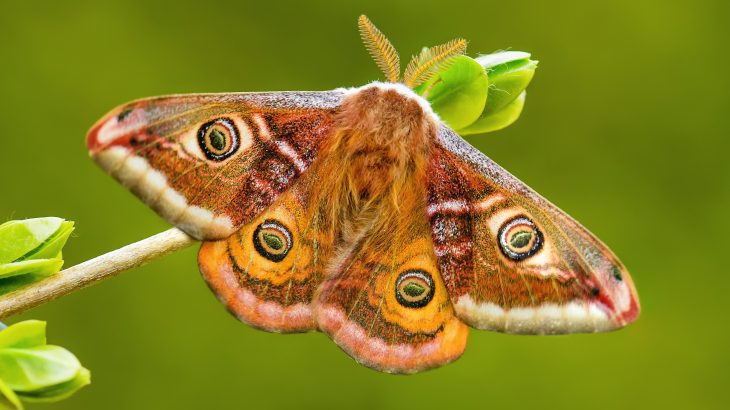 Moths have wings that have precisely evolved to avoid their most dangerous predators, according to researchers at the University of Bristol. In an evolutionary arms race, moth wings have acquired extraordinary sound absorbing properties that help them evade echolocating bats.

Study lead author Dr. Marc Holderied is an expert in behavioural acoustics and sensory ecology. Earlier this year, his team reported that deaf moths had developed scales on their bodies that allowed them to absorb 85 percent of the incoming sound energy that bats use to detect them.

The moths had evolved a 1.5-millimeter deep protective barrier that serves as a porous sound absorber. This protective barrier would not work on the wings, however, because the increased thickness would restrict the moths’ ability to fly.

The current study reveals that moths have actually gone one step further by creating a resonant absorber that is 100 times thinner than the wavelength of the sound it absorbs. This means that moths can maintain their mobility while masking the echoes of their wings during flight.

“Most amazingly, moth wings also evolved a way to make a resonant absorber absorb all bat frequencies, by adding another amazing feature – they assemble many of these resonators individually tuned to different frequencies into an array of absorbers, which together create broadband absorption by acting as an acoustic metamaterial – the first known in nature,” said Dr. Holderied. “Such a broadband absorption is very hard to achieve in the ultrathin structures of moths’ wings, which is what makes it so remarkable.”

“The promise is one of much thinner sound absorbers for our homes and offices, we would be getting close to a much more versatile and acceptable sound absorber ‘wallpaper’ rather than bulky absorber panels.”