Are we loving our tourist destinations to death? • Earth.com 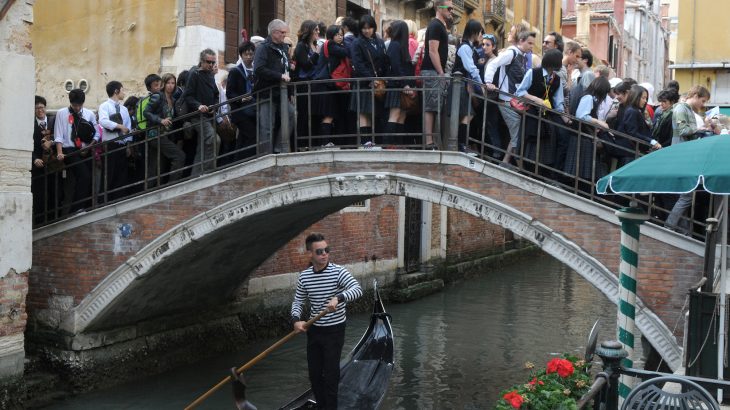 Are we loving our tourist destinations to death?

Touring in Venice, Italy was different than I expected. Although the iconic bridges and canals looked romantic and serene in the tour books, in person I struggled to push through the throngs of tourists. When I was able to make my way onto the bridges, I was struck by the strong odors and garbage floating in the waterways. Away from the bridges, merchants threw selfie sticks and purses into my face, yelling the price to me. I didn’t even get to see the inside of Saint Mark’s Basilica as there was a two-hour wait to get in.

I was disheartened by my experience in one of the most famous cities in the world, not only for the sake of my own travels, but also because of the degradation of the city at the hands of tourists.

The problem of overtourism is not isolated to Venice. Cities such as Rome, Santorini and Barcelona have experienced an influx of visitors as well. The tourism sector has increased dramatically in recent decades. In 1950, there were 25 million international tourists compared to 1.3 billion in 2017. And now, the tourism sector is projected to only keep growing.

Today’s culture, especially among young people, values having experiences and travels over material possessions resulting in increased interest in travelling. Some destinations have been famous travel spots for years while other previously unknown sites have been amplified by social media sites and travel blogs. It’s hard to resist the urge the visit these places once you see jaw-dropping photos of them plastered all over the internet. Destinations such as Iceland, Portugal and Croatia, which slid under-the-radar years ago, are now prime vacation spots for young travelers.

Tourism can be beneficial towards local communities and economies, but overtourism is an issue for a host of reasons. Droves of tourists often leave a footprint behind after their visits. Tourist attractions can become overloaded with garbage and pollution as taxis and buses cart tourists around. Cruise ships can destroy the local ecosystem by striking fragile coral reefs. Local wildlife may be exploited for use as souvenirs as seen in tropical destinations where sea turtles are poached for jewelry and sea shells are sometimes overharvested.

These negative consequences may cause hostility among locals who live in tourist hot spots and have to deal with a reduced quality of life due to excessive noise and traffic. The population of Venice has plummeted from 175,000 in the 1940s to 55,000. In 2017, 2,000 Venetians marched against the tourism industry, The Guardian reports. One of the protestors told the outlet they believe Venice may soon be populated only by tourists.

It is cruelly ironic that the beauty that brought tourists to these locations could be the cause of their demise. Historic and culturally significant locations should be preserved and maintained in their natural form but it is difficult to do this with a large number of tourists constantly visiting.

The governments of some popular tourist destinations have implemented laws in an attempt to control overtourism. Machu Picchu limits the number of people who can visit and closes the Inca trail every February for maintenance. Venice prohibits people from sitting in popular areas such as St. Mark’s Square and the steps of the Rialto Bridge.

The World Tourism Organization just released a report on overtourism where they outline their recommendations on this issue. Suggested solutions include having cities host events in less populated areas, promoting experiences during off-peak travel times, creating pedestrian-only zones and increasing the benefits of tourism to local communities. The recommendations highlight the idea of encouraging sustainable tourism where both locals and the travelers can enjoy the beauty of these iconic cities.

Tourists should also consider visiting destinations that are not known for overtourism. Visiting these unknown spots can provide tourists with an authentic experience where they feel more like a local than a Black Friday shopper fighting the crowds.