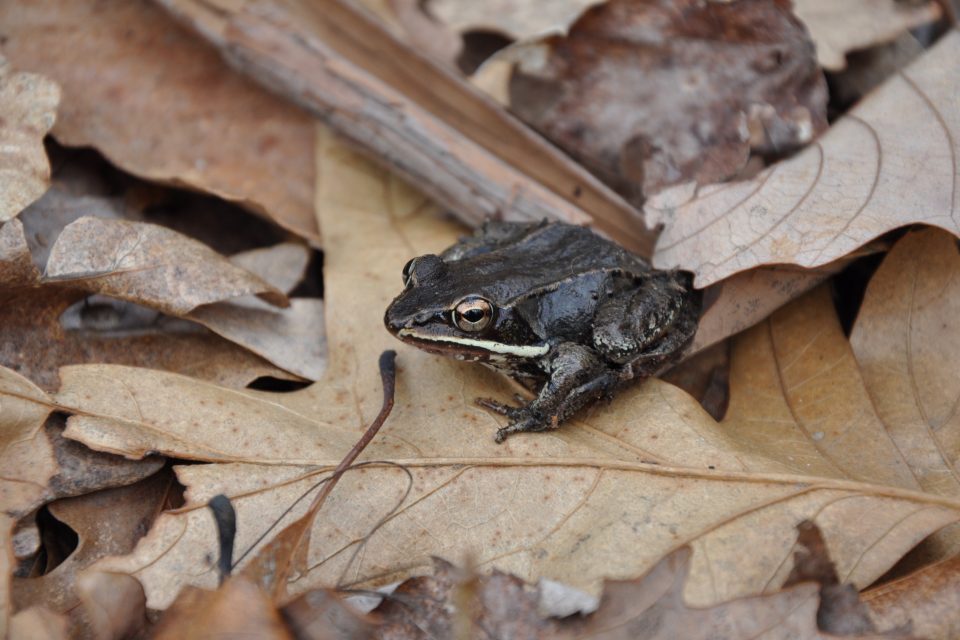 An investigation into the effects of traffic noise on amphibians has revealed that when frogs from quiet ponds are relocated close to the highway, they experience stress that impairs the production of important immunity defense compounds. On the other hand, frogs that are removed from sites near busy highways show a dampened stress response to traffic noise.

Study first author Jennifer Tennessen was a graduate student at Penn State at the time of the research.

“In the United States, traffic noise can be heard nearly everywhere,” said Tennessen. “Noise can have a number of negative consequences on wildlife, for example by interfering with communication and reducing the ability to find food.”

“Frogs are particularly vulnerable to noise because they rely on sound to find mates and reproduce. Wood frogs travel to ponds in the spring to mate and lay their eggs, but many of these ponds are located near noisy roads. We wanted to know if traffic noise has negative physiological effects on wood frogs and, if so, whether they can adapt.”

The analysis was focused on eggs collected from ponds within 300 feet of interstates and major highways and from remote ponds as far as three miles from major roads. After the eggs were raised in the lab, the offspring were exposed to either traffic noise or to ambient noise for 8 days, which is around the length of time they would spend in breeding ponds.

The study revealed that frogs from the quiet ponds had increased levels of the stress hormone corticosterone after exposure to traffic noise for 8 days. Immune function was also altered among the frogs from quiet sites when they were exposed to the sounds of traffic. The researchers found elevated numbers of white blood cell called monocytes and impaired production of important defensive compounds called antimicrobial peptides.

Study co-author Louise Rollins-Smith is a professor of Pathology, Microbiology, and Immunology at the Vanderbilt University School of Medicine.

“In frogs from quiet ponds, exposure to traffic noise impaired the ability to produce antimicrobial peptides in the brevinin and temporin families,” said Professor Rollins-Smith. “Antimicrobial peptides are components of the immune defense system that provide important protection against pathogens like bacteria and fungi. Brevinin-family peptides in particular strongly inhibit the fungal pathogen that causes the infectious disease chytridiomycosis, or chytrid, which is responsible for widespread mortality of amphibians around the world.”

Frogs from noisy ponds did not have elevated levels of corticosterone after exposure to traffic sounds for 8 days. This indicates that frogs from ponds in noisy areas have a dampened stress response.

The frogs from noisy ponds actually had increased monocyte counts when exposed to the ambient noise that is heard at quiet ponds. The researchers believe that this kind of immune response may happen in unfamiliar situations. The finding also suggests that frogs from noisy sites have adapted to avoid the physiological costs of noise.

“In the future, we hope to pinpoint the mechanism of how frogs are adapting to noise,” said Tennessen. “The roads near the ponds we studied were built between the 1940s and 1960s, so these changes may have occurred within 15 to 35 frog generations. People usually think of adaptation and evolution occurring over huge timescales, but here we see that animals can respond relatively quickly to new threats, though the consequences of that response are still unclear.”