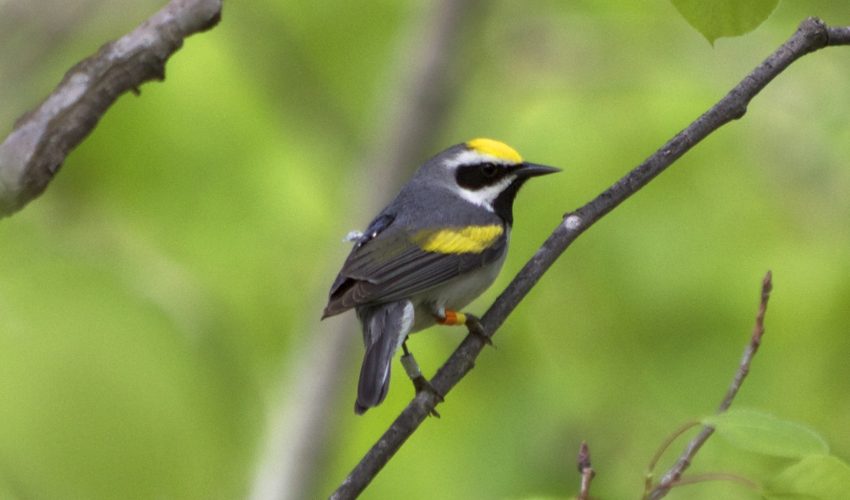 Researchers at the University of Toledo have tracked the migratory routes of tiny songbirds and found that the presence of these birds in their non-breeding sites is a strong predictor of population stability. This indicates that the birds are exposed to more difficult conditions and threats across the regions where they spend their winters.

The golden-winged warbler is a rare songbird that is about the size of a ping pong ball and weighs less than three pennies. The tiny birds have breeding sites in the Appalachian Mountains and the Great Lakes. In the wintertime, the birds migrate south to the tropical climates of Central and South America.

The research team monitored the birds over the course of five years using tags to calculate their light-based location across thousands of miles. Data obtained from the geolocators revealed that different populations did not mix between their nesting grounds and their non-breeding tropical sites.

The information showed a strong migratory connectivity, and confirmed that populations of golden-winged warblers stick together all year.

“These golden-winged warblers that breed throughout the Great Lakes region and Appalachian Mountains are going to different areas in the winter,” said study co-author Dr. Henry Streby.

“That’s pivotal because those tropical areas experienced different rates of forest loss during the last 60 years. When we look at forest-loss rates, it correlates closely with golden-winged warbler population changes on breeding grounds thousands of miles away.”

The experts discovered that declining populations of warblers spent their winters in northern South America, while stable populations resided in Central America during the non-breeding season.

The researchers explained that conservationists must shift their focus toward preventing further deforestation in Venezuela to protect the habitat of the golden-winged warbler, a species that is now being considered for federal protection.

“If the winter habitat keeps disappearing, the warblers that winter in northern South America won’t survive and come back to the Appalachian Mountains no matter how much breeding habitat is available to them,” said Streby.