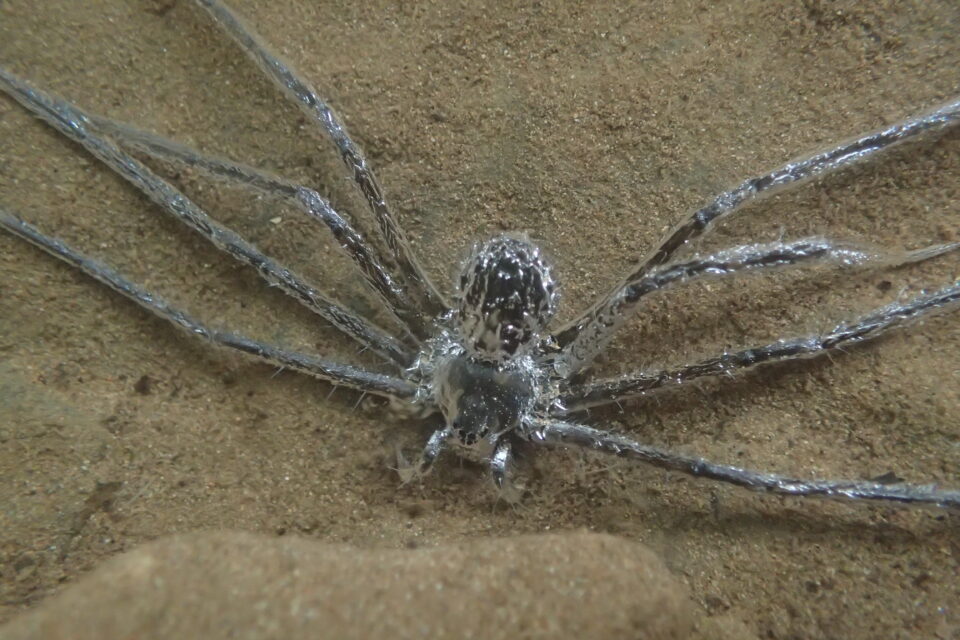 A tropical spider species can hide from predators underwater for up to 30 minutes by using a “film” of air. The film allows the creature to breathe while submerged in water.

Lindsey Swierk, assistant research professor of Biological Sciences at Binghamton University, observed a large tropical spider fleeing from humans and hiding underwater. This was an interesting discovery as the species was not previously known to escape by water.

“For a lot of species, getting wet and cold is almost as risky to survival as dealing with their predators to begin with,” said Swierk. “Trechalea spiders weren’t previously known to hide underwater from threats – and certainly not for so long.”

The spider spent about 30 minutes underwater by keeping a “film” of air over its entire body. The fuzzy hairs that cover the spider’s body likely help maintain the film of air. This strategy could work to prevent thermal loss while underwater, or prevent water from entering respiratory organs. Swierk and her colleagues suspected this because spiders are air-breathing creatures that are not adapted to cold stream water that the spider submerged itself in.

“The film of air surrounding the spider appears to be held in place by hydrophobic hairs covering the spider’s entire body surface,” said Swierk. “It’s so complete that the spider almost looks like it’s been dipped in silver”.

This observation provides new insight into how species can cope with the problem of finding refuge underwater. Swierk had previously observed a Costa-Rican lizard species that was able to stay underwater for 16 minutes to hide from predators.

Animals that hide from predators are forced to manage risks and find creative means to survive. These animals, such as spiders, could also face risks by fleeing predators.

“For some species that means leaving territory or mates unguarded, or maybe spending stored energy in a sprint. In this species, potential risks of underwater refuge use can include lack of respiration and a loss of body heat,” said Swierk.

The fascinating discovery has opened the door to further explore how different species can escape their predators to survive.

The study is published in the journal Ethology. Image Credit: Lindsey Swierk