What will be lost as Trump slashes the Grand Staircase-Escalante • Earth.com 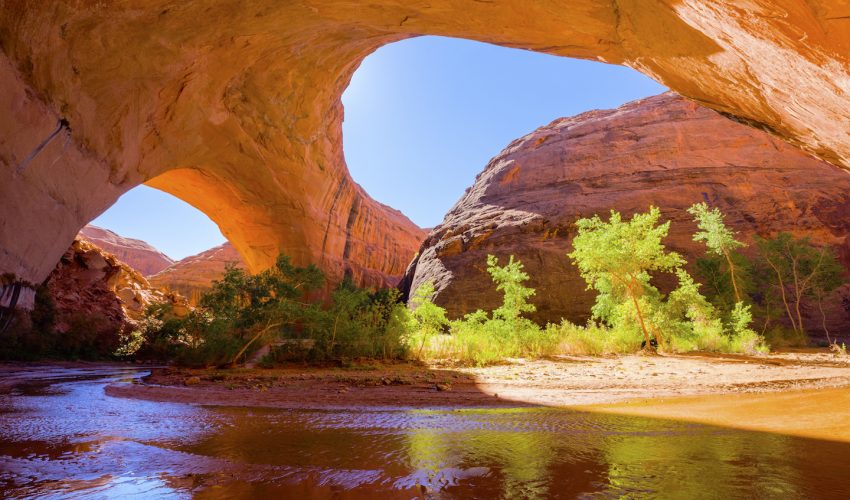 What will be lost as Trump slashes the Grand Staircase-Escalante

When I was very young, I went on a camping trip with my family and some friends.  We visited an expansive prairie filled ranch of an acquaintance.  The ranch was near Badlands National Park, South Dakota.  In my memory there were piles of fossil bones everywhere.  I collected a tooth that was later identified as a mastodon tooth.  I was mesmerized by the smooth enamel surface, worn on the edge by a live animal chewing.  As a child I imagined I could feel the residual energy of the animal’s life force still inside the fossil.  I would brush my fingers along the varnished surface of bone and imagine the life of an ancient creature.  This feeling and the fascination it spawned lead me down a path that landed me a job working at a museum quality fossil replica studio in western Colorado.

Fossil replication is tedious, exacting.  The basic principle is simple: you make a mold by painting a layer of liquid rubber over a fossil, wait for it to harden and peel it off.  Making the fossil replica then involves pouring liquid epoxy into the rubber and waiting for it to harden, then pulling the replica out of the rubber.  The devil is in the details.

To learn more about paleontology in Grand Staircase-Escalante, I got in contact with Randall Irmis, Chief Curator and Curator of Paleontology at Natural History Museum of Utah.  Dr. Irmis describes himself as a kid who liked dinosaurs and never grew up, right out of grad school for a PhD in Integrative Biology, he got a job at NHMU.  Randall describes the scientific curiosity that lead him and other researchers to Grand Staircase-Escalante,

“One of my major field-based projects is in Late Cretaceous rocks in Grand Staircase-Escalante National Monument (GSENM), where we are documenting ancient ecosystems on land between ~90 and 74 million years ago.  My collaborators and I are interested in why we find so many unique species in GSENM – does it relate to physical barriers, climate, sea level, or a combination of those factors?  Also, what does it tell us about ecosystem evolution in a greenhouse world?”

Under Trump’s reduced monument(s) the Kaiparowits Plateau will be cut from National Monument status.  The plateau is the recent site of the excavation of a Tyrannosaur skeleton.  Dr. Irmis tells me about working in the National Monument and what could be lost, “Working in GSENM is a truly spectacular experience.  I love the high desert, and the landscape is beautiful, striking, and stark.  The fossils are really quite abundant, beautifully preserved, and few other places in the United States afford the chance to regularly discover so many new species of ancient animals and plants!  The many moments of discovery make working in GSENM so exciting.  It is incredible to excavate and study new species never before known to science, but literally every fossil we excavate is a visceral experience – as you uncover the specimen its remarkable to think you are the first human to ever lay eyes on this bone, shell or leaf, and the first living thing of any kind to see it in 75+ million years…The areas removed from the monument contain fossil bearing rocks from the Triassic Period (252-201 million years ago) and part of the Cretaceous Period (particularly those from 95-80 million years ago). These include fossils that document the beginning of the age of dinosaurs (Triassic), those documenting marine ecosystems of the Western Interior Seaway and a climate change event that caused a mini-mass extinction in the ocean called ‘Oceanic Anoxic Event 2’ during the Late Cretaceous (~94 million years ago), and important Cretaceous fossils of early mammals from 90-80 million years ago.”

On one wall in the fossil casting business hangs a poster.  On the poster is a photograph of a dinosaur trackway.  Tracks with three toes lead through sandstone but end at the edge of a body of water.  The poster reads, “The Lost Trackway” and below that, “Lake Powell”.  The poster is a sad nod to the realities of the west and how land is treated here.  Lake Powell of course is the damming of Glen Canyon, a place that has been spoken of by old timers with the same reverence used for Zion or Canyonlands or Arches.  When Glen Canyon Dam was built sacred Native American sites were flooded; the town of Hite, Utah was destroyed in the deluge and people were uprooted.  A giant sandstone arch was covered by Lake Powell.  Lake Powell has more miles of shoreline than the West Coast of the US.  Imagine the things we don’t even know of covered by Lake Powell.  This time, there isn’t a flood threatening, just the slow, steady wave of development.

What we may potentially lose is priceless.  Dr. Irmis makes the scientific importance obvious.  The curiosity that would drive one to spend a life pouring over fossils from this area is palpable,

“The paleontological resources of GSENM are truly unique and spectacular.  It preserves fossils from the Late Permian (~270 million years ago) all the way to the Late Cretaceous (~66 million years ago), and nearly every geological layer has significant fossils in it.  Particularly notable are the Late Cretaceous deposits from 95-74 million years ago, where we and others have discovered dozens upon dozens of new species of fossil organisms not found anywhere else on Earth.  These new species include plants, clams, snails, fish, amphibians, lizards, turtles, crocodilians, dinosaurs, birds, and mammals – basically the entire spectrum.  Because they are unique to GSENM, they document ancient ecosystems not found anywhere else in the world, and as mentioned above, are critical to understanding how life on earth responds to greenhouse conditions (i.e., globally warm temperatures, high atmospheric CO2, high sea levels, and no polar ice caps).  As such, they’re an important study system for where our Earth might be going in the future…

Although there are abundant and important dinosaur footprint fossils from the Early and Middle Jurassic sediments in GSENM (~200-165 million years ago), all the named species based on skeletal material come from the Cretaceous sediments that are between 95-74 million years old.  Over two dozen new species of dinosaurs have been discovered from this time interval, but only about half of those have been formally named and scientifically described because we have so many new species, and it takes a lot of time to do the research.  Its worth noting that we also have discovered from these same rocks many new species of turtles, crocodilans, amphibians, lizards, and mammals that are also unique to GSENM.  During this time GSENM was a sub-tropical environment similar to the bayous of Louisiana today – a broad floodplain crisscrossed by rivers and streams with cypress-like conifers and other lush vegetation.”

The threat to the one-of-a-kind fossils in Grand Staircase-Escalante National Monument stands in stark contrast to Trump’s declaration.  In reference to the potential loss of protection on fossil sites of Grand Staircase-Escalante Trump proclaims, “The modified monument boundaries take into account this new information and, as described in more detail below, retain the majority of the high-potential areas for locating new fossil resources that have been identified within the area reserved by Proclamation 6920.”  Really in the end it comes down to: do you really believe this president; or is this just another case of ‘Alternate facts’?