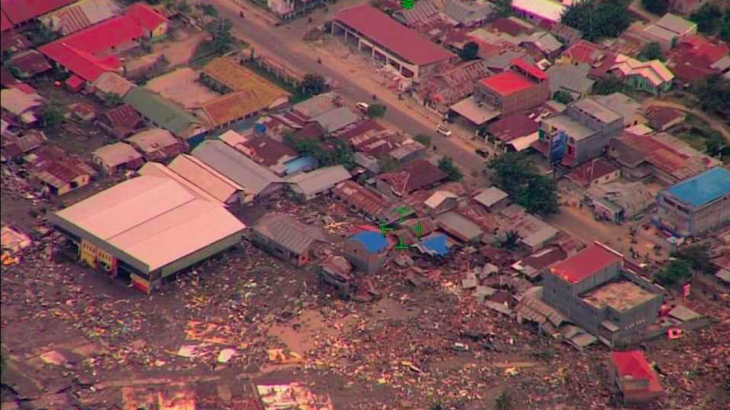 Rescue workers are desperately looking for survivors trapped underneath debris on the Indonesian island of Sulawesi after a 7.5-magnitude earthquake triggered a devastating tsunami on Friday. Local media is reporting that the death toll has now reached 1,200, and that number is expected to rise by hundreds or possibly even thousands.

Emergency crews are clearing huge mounds of rubble to try and reach victims, but communication and transportation issues are making the rescue efforts extremely difficult. There are reports that people are trapped alive underneath the remains of a shopping mall in Palu, and also under the debris of the Roa Roa Hotel.

Thalib Bawano, who is helping in the recovery effort, told AFP news agency that three people have been rescued from the hotel rubble, where at least 50 more may be trapped.

“We also heard voices at several points, including a child,” said Bawano. “They were asking for help, but they are still there till now. We gave them motivation, so they can have spirit because they are trapped between life and death.”

Most of the fatalities occurred in the coastal city of Palu. Officials are overwhelmed by the number of bodies, and Indonesian disaster agency spokesman Sutopo Purwo Nugroho said that arrangements have been made for a mass burial site for the victims. Nugroho explained that a prolonged delay could create a new health crisis.

Damage from landslides forced the airport in Palu to close, which is now operating at partial capacity. Thousands of people camped out there in 90-degree weather over the weekend hoping to leave.

A tsunami alert was immediately issued after the earthquake hit. According to NPR, however, that alert was canceled by Indonesia’s Meteorology, Climatology and Geophysics Agency about 30 minutes later. Experts had determined that the earthquake was not capable of generating a tsunami.

According to local reports, the tsunami sirens were not working due to damage sustained by the earthquake.

Phil Cummins is a professor of Natural Hazards at Australian National University. Speaking to CNN, he said that the cancellation of the tsunami warning signal should not be a major concern.

Professor Cummins told CNN: “During the time when a warning was potentially useful, it was apparently in effect, and that seems far more significant to me than having canceled it prematurely after the tsunami hit.”