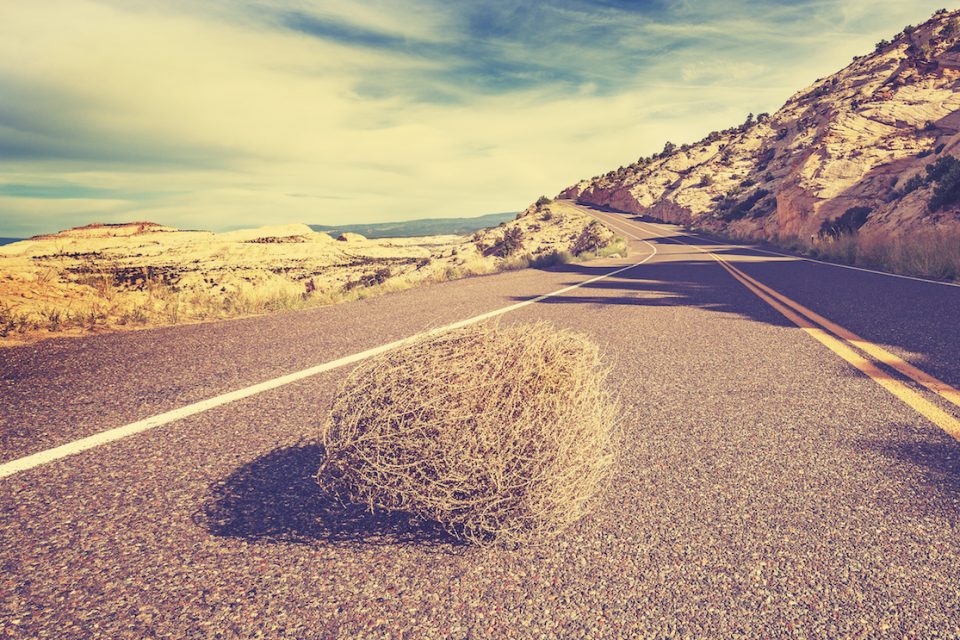 It is a testament to America’s immigrant character that one of the most iconic symbols of the Old West is actually from Russia. The tumbleweed (Salsola tragus), evocative of cinematic frontier towns and harbinger of the lonely drifters that arrive to clean them up, is a Russian transplant. And it wasn’t even here yet during the early years of Western exploration.

The best guess as to its arrival is 1873, as determined by U.S. Department of Agriculture botanist Lyster Hoxie Dewey. In 1880, the department received its first complaint about the rambling weed, from a resident of Yankton, South Dakota. A decade later, more complaints began rolling in from both South and North Dakota, and in 1892, the young Dewey set out to investigate the invasion. Through interviews and extrapolations, he narrowed the tumbleweed ground zero to Scotland, South Dakota, where Ukrainian immigrant farmers had planted flaxseed from Russia contaminated with the ancestors of the now-ubiquitous aliens.

From there, tumbleweeds rolled all the way across the plains in both directions, aided by railway travel and the movement of livestock. By 1885, they had arrived in California, aided by the increasing removal of prairie grasses and their replacement with featureless agricultural fields, a process that would culminate in the disastrous Dust Bowl of the 1930s. The spread of the tumbleweed, also called the Russian thistle, is thought to have been among the most rapid biological invasions in history. By 1959, it had even arrived in Hawaii. It is currently found in all states except Florida and Alaska and has made its way to countries as far-flung as Argentina, Australia, Canada, Chile, Indonesia, Mexico, New Zealand, and South Africa.

The tumbleweed is one of some 140 species in the genus Salsola, of the family Amaranthaceae, which also contains spinach and beets. Six other species have invaded the United States as well. Along with S. tragus, which is native to arid areas of Europe, Asia, and northern Africa, S. paulsenii, a European and Asian native, and S. australis, from Australia, are among the most problematic species. In California, S. ryanii, a hybrid of S. tragus and S. australis, and another hybrid of all three species, have rapidly spread across the state in the span of a decade, mirroring the earlier expansion of the parent species. 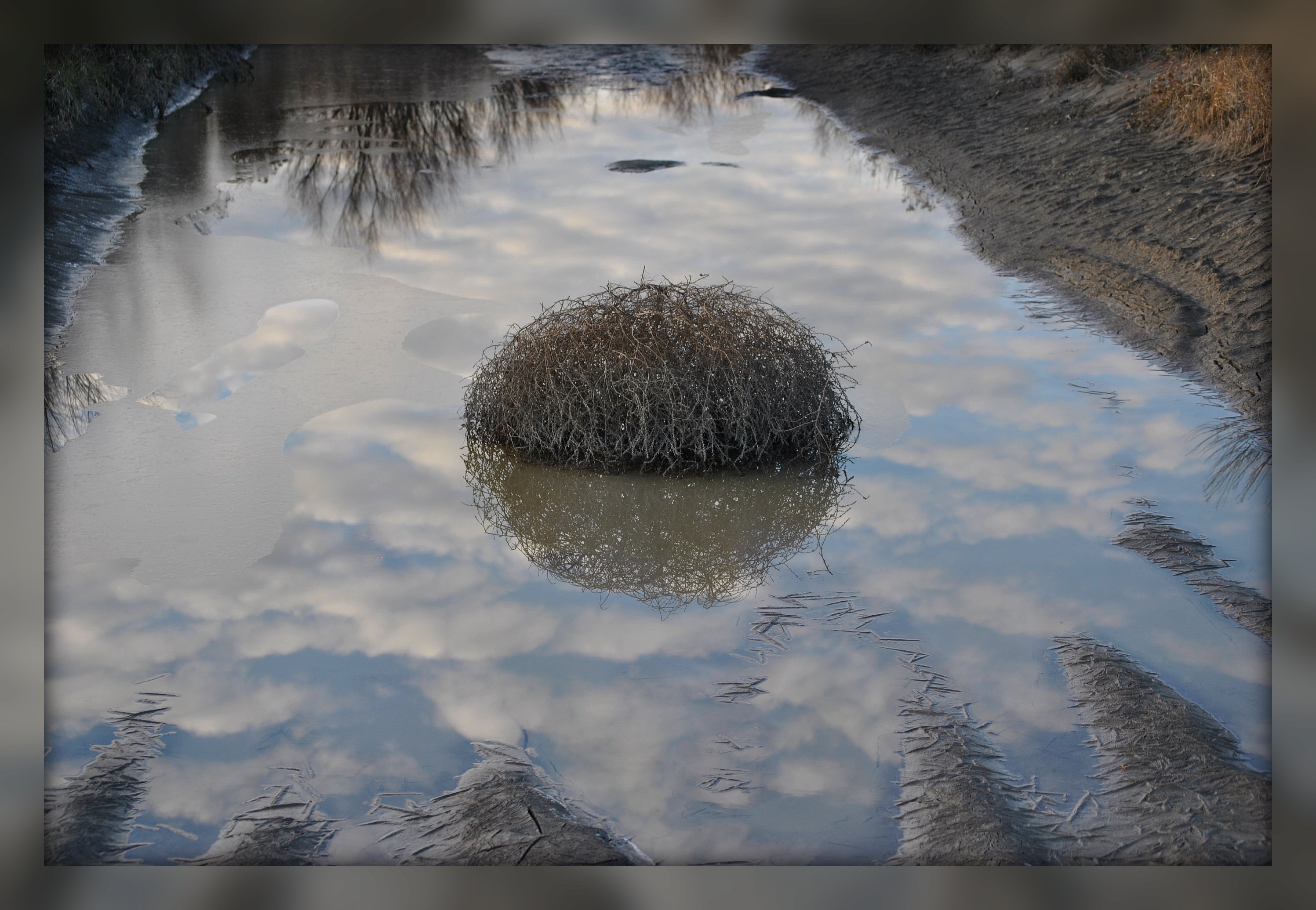 Uniquely hardy and with a preference for loose, uncompacted soil, the plant was primed to capitalize on the havoc left in the wake of westward expansion—plowed fields, railroad tracks, new construction. In fact, the seeds of related plants have been found in ancient agricultural excavations, suggesting that they have long availed themselves of human disturbance.

Fascinatingly, the seeds do not carry any stored nutrients. The tiny, coiled plant embryo is visible through the translucent seed coat, looking for all the world like a little worm. With even a small amount of water and at temperatures as low as 30 degrees Fahrenheit, the embryo emerges from its capsule and penetrates the soil in the span of 12 hours. The pliable, needlike seedlings, which may display stripes of purple or red, quickly grow into spiny, woody plants of three feet tall, though some may become significantly larger. Single tumbleweeds the size of small cars have been observed. A six-foot long taproot plunges into the earth, arrayed with an extensive network of secondary roots. And an array of inconspicuous, petal-less flowers get to work on producing the next generation.

Its deep root system makes the plant, which hails from dry areas, uniquely drought-tolerant. An annual, it dries out in the fall and a unique ring of brittle cells that forms at the base of the main stem allows it to easily break off under the force of the wind and begin its travels, during which it may disperse as many as 250,000 seeds. This is actually not an uncommon strategy for plants in dry regions. Kochia scoparia, a related invader, is also known as a tumbleweed and sows its seeds in much the same way, though it isn’t quite as a pervasive as its cousin.

In Australia, non-native panic grass creates huge drifts of tumbling vegetation. And in New Zealand, spinifex grass seeds disperse when their seedheads roll along the dunes, somewhat less dramatically due to their smaller size. The rose of Jericho (Anastatica hierochuntica), or resurrection plant, found in the Sahara Desert, also sometimes blows about like a tumbleweed, though this is not thought to be its major means of dispersing seeds.

As cartoonish as the image of giant drifts of tumbleweeds might be, they occasionally create major problems for humans in their path. Cities in California, Utah, Colorado, and North Dakota have been inundated by tons of dead plant matter, trapping people in their houses and necessitating expensive removal operations. This has been particularly prevalent during recent droughts. California and other arid states have had problems with tumbleweeds blocking aqueducts and the weeds have been known to go up in flames and spread dangerous brush fires. Tumbleweeds are also agricultural pests, interfering with the production of alfalfa and other grains, and they are a host plant for the beet leafhopper (Circulifer tenellus), an insect that carries the damaging curly top virus that affects beets, melons, and tomatoes.

These nasty habits have led to extensive remediation efforts. While herbicides are currently most effective, their extensive application is cost-prohibitive. Numerous biological control agents, selected from parasites of the plant in its native range, have been considered for larger-scale control. Two species of moth, Coleophora klimeschiella and C. parthenica, introduced in California in the 1970s and now established in the state, have proven ineffective. The weevil Lixus incanescens, the plant bug Piesma salsolae, and the blister mite Aceria salsolae have also been tried experimentally. The current top candidates, though, are a pair of fungi hailing from the steppes from which the tumbleweed originated: Colletotrichum salsolae and Uromyces salsolae. Extensively tested under controlled conditions, these fungi appear to affect few other plants and may be ready for release soon.

As pernicious as they are, tumbleweeds aren’t all bad. Though they aren’t ideal livestock forage, the young plants are palatable and during the Dust Bowl, tumbleweed hay was said to have saved the beef industry. And pickled tumbleweed was even eaten by starving farmers. Wildlife, including bighorn sheep, pronghorn antelope, and prairie dogs also eat the shoots, and many pollinators feed on the flowers. Tumbleweeds were the first plants to reemerge following the cessation of nuclear testing at the Nevada Test Site and the species has been considered as a candidate for bioremediation.

Tumbleweeds have also been used in biomonitoring for the presence of airborne heavy metals. While an idea floated in the 1980s to compact the dried plants and sell them as fireplace logs doesn’t appear to have gained much traction, the spiky balls have formed the basis of a kitschy niche market, wherein they are sold as decor. Perhaps most exotically, the plant was used as the model for a proposed wind-blown Mars rover, which would bounce along the surface of the Red Planet, collecting samples—an appropriate tribute to a plant that made its name as an alien, far from home.

Love them or not, these immigrant icons have made their home on the range—and don’t seem likely to disappear any time soon.