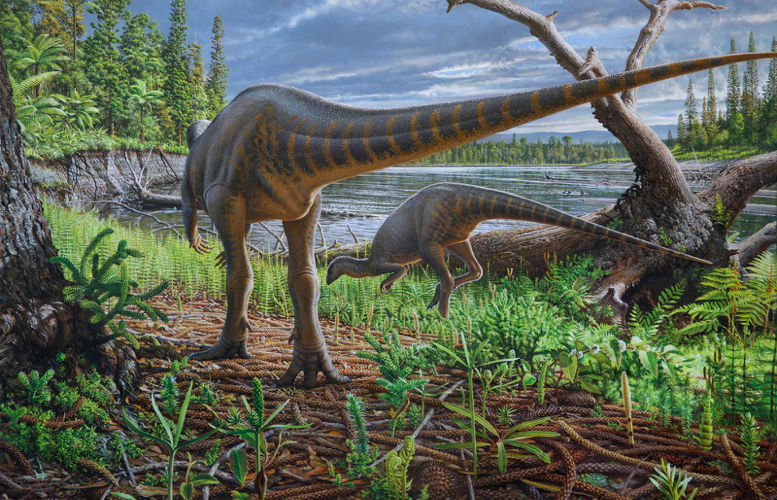 The remains of a previously unknown dinosaur have been found in 113 million-year-old rocks in Southeastern Australia. The new species has been named Diluvicursor pickeringi, which means Pickering’s Flood-Running dinosaur.

The skeleton of Diluvicursor pickeringi was discovered in 2005 eroding from a rock platform near Cape Otway. The species is named in honor of David Pickering, who was Museums Victoria’s Collection Manager.

The partial skeleton of the turkey-sized dinosaur, which includes the fossilized tail and foot bones, is giving scientists new insight into the diversity of small, herbivorous dinosaurs known as ornithopods. These bipedal creatures lived in the Great Rift Valley that once existed between Australia and Antarctica.

“Diluvicursor shows for the first time that there were at least two distinct body-types among closely related ornithopods in this part of Australia,” said lead author Dr. Matt Herne.

“One was lightly built with an extraordinarily long tail, while the other, Diluvicursor, was more solidly built, with a far shorter tail. Our preliminary reconstruction of the tail musculature of Diluvicursor suggests this dinosaur was a good runner, with powerful leg retracting muscles.”

Dr. Herne pointed out that future research may focus on understanding the ecology of these dinosaurs, including what they ate and how they interacted with their environment.

The site where the fossilized remains were found, which is known as Eric the Red West, is helping researchers to construct a model of the Great Rift Valley ecosystem. Fossil vertebrate remains uncovered at this site were buried at the base of a powerful river, along with tree stumps, logs, and branches that had been swept away by flooding.

“The carcass of the Diluvicursor pickeringi holotype appears to have become entangled in a log-jam at the bottom of this river,” explained Dr Herne. “The sizes of some of the logs in the deposit and the abundance of wood suggest the river traversed a well-forested floodplain. The logs preserved at the site are likely to represent conifer forests of trees within families still seen in Australia today.”

“Much of the fossil vertebrate material from Eric the Red West has yet to be described, so further dinosaurs and other exciting animals from this site are now anticipated.”