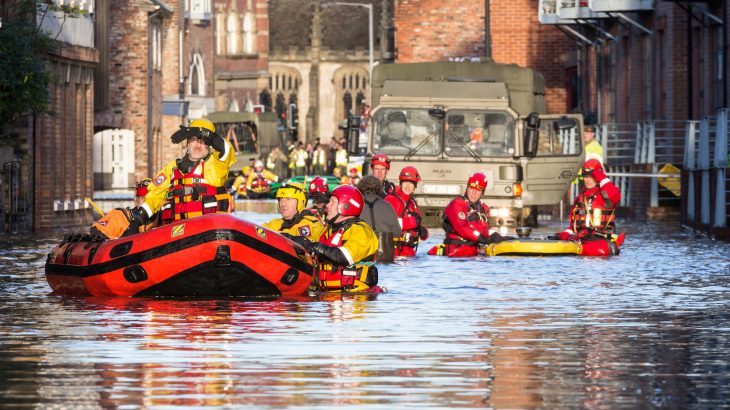 The Met Office just released its UK Climate Projections 2018 (UKCP18) report, which is providing an unprecedented account of how climate change could affect Britain. If global warming is not urgently addressed, the UK could face “devastating impacts” in the coming decades, including a dramatic rise in summer heat and winter flooding.

The comprehensive report follows the latest installment of the U.S. National Climate Assessment, which projects an increasing risk to the health and well-being of Americans if human-induced climate change continues at the current rate.

The forecast from UKCP18 is equally grim, warning that average summer temperatures in the UK will be up to 5.4 degrees Celsius hotter by 2070 if harmful emissions remain high. In addition, the winter season will be up to 4.2 degrees Celsius warmer. The experts also found that the likelihood of heatwaves that compare to summer 2018 could reach 50 percent by 2050.

The researchers estimate that by 2070 the average summer rainfall will decline across the UK by as much as 47 percent, while winter precipitation will increase by up to 35 percent. Sea-level rise is also extremely threatening under a high-emission scenario, with the potential to increase by 3.7 feet within this century.

“These projections from leading UK scientists build on last month’s report from climate experts, highlighting the stark reality that we must do more to tackle climate change in order to avoid devastating impacts on our health and prosperity,” said Claire Perry, who is the Minister for Energy and Clean Growth.

“We are already leading the world in the fight against climate change but we cannot be complacent. As we look towards crucial global climate talks in Poland next week, it is clear that now, more than ever, is the time for collective and ambitious action to tackle this urgent challenge.”

Environment Secretary Michael Gove spoke during the official launch of UKCP18 at the Science Museum.

“There is perhaps no area of public policy where scientific rigor is required in shaping policy making than in dealing with the challenge of climate change,” said Gove. “Today, as we launch the fourth generation of our UK Climate Projections, it is clear that the planet and its weather patterns are changing before our eyes.”

“Just since 2000, sea levels have risen around six centimeters, based on a global-average rise of 3.2mm a year. Our seas are storing increasing amounts of heat – around half of all ocean warming has occurred since 1997. Even as we take action to slow carbon dioxide pollution now, physics dictates that the climate will keep heating up for decades to come.”

Gove said that climate change is causing increasing threats to food security, water security, and national security. He explained that governments have a responsibility to plan for the worst case scenarios.

“It is, of course, impossible for anyone to predict the future with absolute certainty,” said Gove. “But we in the UK are fortunate to have climate scientists whose knowledge and experience are world-leading.”

“In producing this first major update of climate projections for nearly 10 years, they have given governments, local authorities, land managers, national infrastructure bodies and other businesses an invaluable set of tools with which to assess the nature and scale of challenges, and make decisions accordingly…”

“It is because we know further climate changes are inevitable – notwithstanding strenuous international efforts to limit their extent – that we are planning for a wide range of possible futures. It would be irresponsible in the circumstances to do otherwise.”