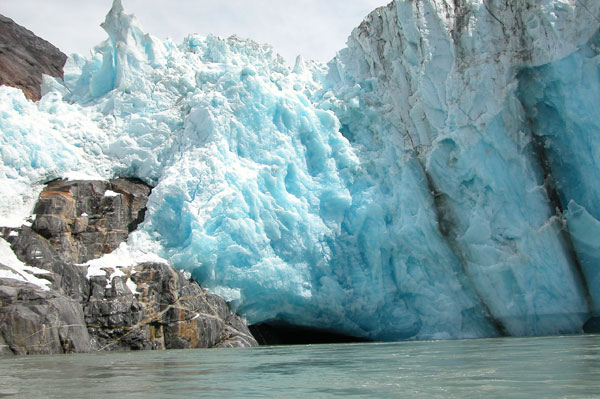 Tidewater glaciers, valley glaciers that flow down to the ocean, are undergoing faster rates of underwater melting than previously thought.

A new study led by Dave Sutherland, an oceanographer from the University of Oregon, shows that current models have potentially underestimated the rates of subsurface glacier melting.

Without a better understanding of glacier melting and how glaciers are impacted by changing global temperatures, researchers can’t accurately predict future sea-level rise.

Sutherland and his team focused on the Leconte Glacier which flows into the Leconte Bay near Juneau, Alaska and tracked subsurface melting.

Because tidewater glaciers end at the ocean, it’s impossible to collect and analyze data with the same methods used for measuring melting on Antarctic ice shelves.

“We don’t have that platform to be able to access the ice in this way,” said Sutherland. “Tidewater glaciers are always calving and moving very rapidly, and you don’t want to take a boat up there too closely.”

In the past, theoretical modeling helped researchers calculate melt rates for these hard to study glaciers, but Sutherland wanted to test these models in the field, something that had not been done before.

The researchers scanned the point where ocean and ice meet, the ocean-ice interface of the glacier, using a multibeam sonar.

From August 2016 through May 2017, the researchers scanned the ocean-ice interface six times.

The multibeam sonar showed large areas of the glacier underwater and provided the researchers a closer look at where the glacier drains into the ocean from the Stikine Icefield.

Data on temperature, ocean salinity, and how fast water was moving downstream of the glacier were collected for the study.

“We measured both the ocean properties in front of the glacier and the melt rates, and we found that they are not related in the way we expected,” said Rebecca H. Jackson, a co-author of the study. “These two sets of measurements show that melt rates are significantly, sometimes up to a factor of 100, higher than existing theory would predict.”

Studies of ocean-ice interactions typically focus on one kind of glacial melt, discharge-driven melt, where plumes of meltwater are released into the ocean below the glacier, and these plumes slowly chip away at the glacier’s edge.

However, ambient melt is another type of glacial melt that impacts more of the glacier face than discharge-driven melt but is often disregarded by researchers as being insignificant.

Subsurface melt rates across the glacier’s face were high through the study period, and the researchers found that the melt rate increased from spring going into summer.

This shows the importance of considering all potential melting factors into glacier and ice sheet modeling.

“Future sea level rise is primarily determined by how much ice is stored in these ice sheets,” Sutherland said. “We are focusing on the ocean-ice interfaces, because that’s where the extra melt and ice is coming from that controls how fast ice is lost. To improve the modeling, we have to know more about where melting occurs and the feedbacks involved.”