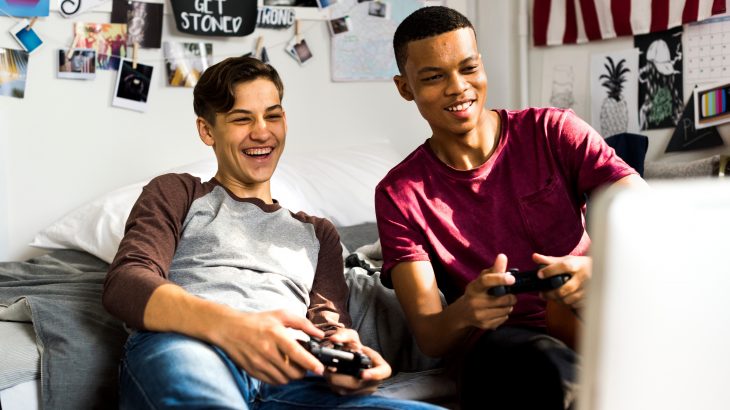 A new study suggests that male college students who play video games are less physically active and have poorer eating habits. The research may help to inform colleges and universities on ways to more effectively educate students about diet and exercise.

Previous studies have established a link between gaming and a higher risk of excessive weight and poor diets among children, but the current study is one of the first to examine the health-related effects of video games in college students.

“It’s important to understand that video games are a risk factor for poor lifestyle habits that may contribute to poor health,” said study co-author Dustin Moore of the University of New Hampshire.

“We know that habits developed in adolescence and early adulthood can stick with people for the rest of their lives, so if we can encourage video game users to eat healthier and exercise more, we could help them live healthier without completely giving up video games.”

Moore will present the research as part of Nutrition 2020 live online, a virtual meeting hosted by the American Society for Nutrition (ASN).

The study was focused on data from the ongoing College Health and Nutrition Assessment Survey (CHANAS), which involves over 1,000 male college students between the ages 18 and 24 at the University of New Hampshire. The survey is directed by principal lecturer and research leader Dr. Jesse Stabile Morrell.

The participants were asked to report on the daily amount of time they spent playing video games and to record the food they ate three days out of the week. Meanwhile, physical activity was tracked with a pedometer.

Nearly 70 percent of participants reported at least some gaming, and more than 40 percent reported playing at least five hours per week.

The study revealed that college men who play video games consume more saturated fat and sodium, which indicates they are eating more salty snacks than those who do not play video games.

Gamers were also found to consume fewer fruits and vegetables, and engaged in less exercise than non-gamers.

While no weight differences were observed, the researchers noted that the poor lifestyle habits associated with playing video games could contribute to excessive weight gain and chronic disease later in life.

The preliminary findings will be presented at Nutrition 2020 live online.