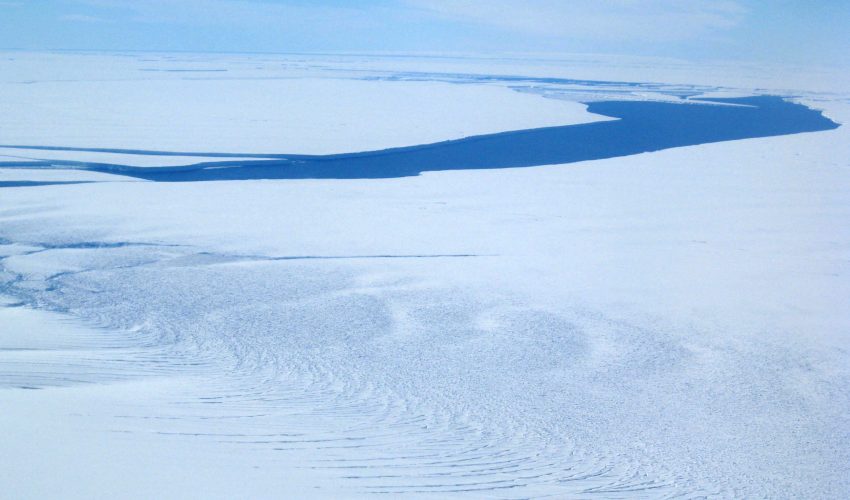 An international team of scientists has discovered a previously unknown source of volcanic heat underlying the West Antarctic Ice Sheet (WAIS). The hotspot may be accelerating the flow of the Pine Island Glacier, which is melting faster than any other glacier in Antarctica.

Study lead author Brice Loose is a chemical oceanographer at the University of Rhode Island (URI) Graduate School of Oceanography. Professor Loose explained to URI Today that the findings are based on research conducted in 2014, when the team collected samples of seawater to test for certain gases that could provide insight into ice retreat at Pine Island Glacier.

“We were looking to better understand the role of the ocean in melting the ice shelf,” Loose told URI Today. “I was sampling the water for five different noble gases, including helium and xenon.  I use these noble gases to trace ice melt as well as heat transport. Helium-3, the gas that indicates volcanism, is one of the suite of gases that we obtain from this tracing method.”

“We weren’t looking for volcanism, we were using these gases to trace other actions. When we first started seeing high concentrations of helium-3, we thought we had a cluster of bad or suspicious data.”

A major volcanic rift system beneath the the West Antarctic Ice Sheet has been dormant for over 2,000 years. Volcanic activity was first documented in 2007 and is now confirmed by the 2014 expedition.

“When you find helium-3, it’s like a fingerprint for volcanism. We found that it is relatively abundant  in the seawater at the Pine Island shelf,” said Professor Loose.

“The volcanic heat sources were found beneath the fastest moving and the fastest melting glacier in Antarctica, the Pine Island Glacier. It is losing mass the fastest.”

The Pine Island Glacier, which helps to stabilize the flow of the massive WAIS, could become a substantial source of sea level rise if the current rate of melting continues or intensifies.

According to the researchers, it remains unclear how the volcanic heat is distributed beneath the WAIS. The experts report that the volcano is clearly causing the ice to melt from underneath and could contribute in ways not yet known to the potential collapse of the ice sheet.

For example, the volcanic activity could also be driving the retreat of the Thwaites Glacier, which is adjacent to the Pine Island Glacier.

Professor Loose explained that climate change is responsible for most of the glacial melt, reducing the size and weight of the glaciers. As the pressure on Earth’s mantle is reduced, additional heat can escape from the volcanic source and warm the seawater surrounding the ice sheet.

According to the National Science Foundation (NSF), the study provides the first geochemical evidence of a present-day volcanic heat source.

“Our finding of a substantial heat source beneath a major WAIS glacier highlights the need to understand subglacial volcanism, its interaction with the marine margins and its potential role in the future stability of the WAIS,” wrote the study authors.

Research efforts funded by the NSF and the United Kingdom’s Natural Environment Research Council (NERC) will continue through 2021.