Volcanoes were the key driver of Earth's mass extinctions • Earth.com 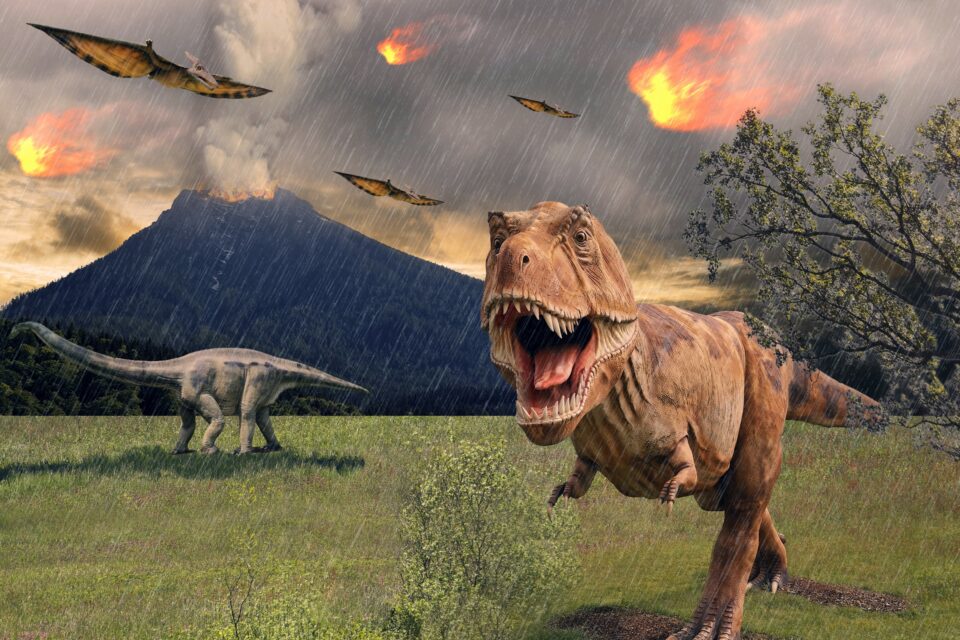 A new study led by Dartmouth College may finally settle a long-standing debate over what caused five major mass extinctions, including the event that ultimately wiped out the dinosaurs. While some scientists argue that mass extinctions were the result of comet or asteroid impacts, the new study supports the theory that volcanic activity was the key driver of the biggest extinction events in Earth’s history.

According to the researchers, four of the five mass extinctions are contemporaneous with a type of volcanic outpouring called a flood basalt. These eruptions are known to flood vast areas, even entire continents, leaving behind what scientists refer to as “large igneous provinces.”

To fit into this category, a large igneous province must contain at least 100,000 cubic kilometers of magma.

As a point of reference, the 1980 eruption of Mount St. Helens involved less than one cubic kilometer of magma. Most of the volcanoes represented in the study erupted on the order of a million times more lava than that, noted the researchers.

“The large step-like areas of igneous rock from these big volcanic eruptions seem to line up in time with mass extinctions and other significant climatic and environmental events,” said study lead author Theodore Green.

For example, the Deccan Traps is a large igneous province in west-central India that dates back to the time when dinosaurs were wiped out 66 million years ago, which is also the same time that the Chicxulub impact crater was formed.

“All other theories that attempted to explain what killed the dinosaurs, including volcanism, got steamrolled when the Chicxulub impact crater was discovered,” said study co-author Professor Brenhin Keller. However, he noted that there’s very little evidence of similar impact events that coincide with the other mass extinctions despite decades of exploration.

In collaboration with study co-author Professor Paul Renne, the researchers set out to quantify the apparent link between volcanic eruptions and extinctions. They discovered that this link was far greater than it would be by random chance.

“While it is difficult to determine if a particular volcanic outburst caused one particular mass extinction, our results make it hard to ignore the role of volcanism in extinction,” said Professor Keller.

“Our results indicate that in all likelihood there would have been a mass extinction at the Cretaceous tertiary boundary of some significant magnitude, regardless of whether there was an impact or not, which can be shown more quantitatively now,” said Professor Renne. “The fact that there was an impact undoubtedly made things worse.”

Green explained that the eruption rate of the Deccan Traps in India suggests that the stage was set for widespread extinction even without the asteroid. The impact was the double whammy that loudly sounded the death knell for the dinosaurs, he said.

“While the total amount of carbon dioxide being released into the atmosphere in modern climate change is still very much smaller than the amount emitted by a large igneous province, thankfully, we’re emitting it very fast, which is reason to be concerned,” said Professor Keller.

Green pointed out that carbon dioxide emissions are uncomfortably similar to the rate of the environmentally impactful flood basalts they studied. He said that this places climate change in the framework of historical periods of environmental catastrophe.