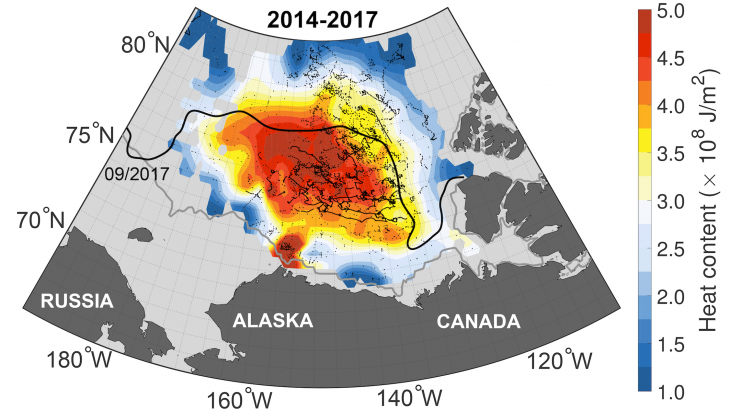 As we recently reported, a patch of extremely thick Arctic sea ice off the coast of Greenland known as the “last ice area” has recently started to break up due to an increase in temperatures in the region.

The reality that previously untouched ice in the Arctic is breaking up and ice cover is declining has many concerned that climate change has jump-started a vicious domino effect where open waters cause more and more sea ice to melt.

Now, a new study has found that archived heat trapped below the Arctic could melt all of the Arctic sea ice if it were to make its way to the surface.

Researchers from Yale University discovered that warmer waters to the south now exposed to solar heat due to declines in sea ice have made their way to the interior of the Arctic Ocean.

If that water were to surface, it could spell disaster for Arctic sea ice cover and the global climate.

“We document a striking ocean warming in one of the main basins of the interior Arctic Ocean, the Canadian Basin,” said Mary-Louise Timmermans, the study’s lead author.

Arctic winds are to blame, driving warmer, previously unexposed, southern waters hundreds of miles away deep into the Canadian Basin. Currently, the warm water is trapped below the surface, but if warming trends continue, the water could rise.

The findings are extremely worrying because it means that sea ice declines are not just impacting the areas nearby.

“This means the effects of sea-ice loss are not limited to the ice-free regions themselves, but also lead to increased heat accumulation in the interior of the Arctic Ocean that can have climate effects well beyond the summer season,” said Timmermans. “Presently this heat is trapped below the surface layer. Should it be mixed up to the surface, there is enough heat to entirely melt the sea-ice pack that covers this region for most of the year.”