Washington dam removal is controversial but may be the best chance for salmon • Earth.com 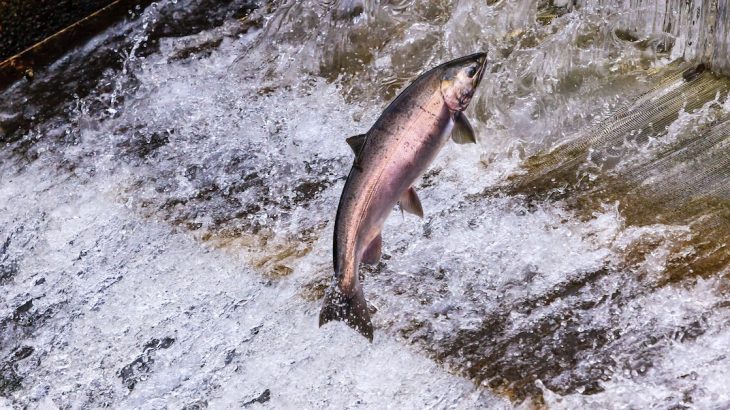 Wheat in Washington State is dependent on dams built and maintained by the federal government, but not for the reasons you may perhaps suspect.

Wheat farmers in Washington harvested 2.2 million acres of their crop in 2018, bearing 153.2 million bushels of the grain, according to the Washington Grain Commission. Washington is ranked number four in the top wheat producing states in the US. Wheat production in Washington represents almost $691 million annually. The only Washington crop that puts more into the economy is apples.

Of the wheat produced in Washington, 85 to 90 percent is exported per year, much of it to Asia, where it’s made into noodles and other products. The wheat producers in Washington are dependent on dams in the state to transport the wheat by barge down the Snake and Columbia Rivers to Portland and Seattle where the wheat is then loaded onto ships for international export.

Although some of the wheat is moved by rail, over half of it is transported by barge along the rivers. Unfortunately for wheat farmers, they’re not the only ones dependent on the Snake and other rivers.

Washington is home to all five species of Pacific salmon. According to the Washington State Recreation and Conservation Office, salmon in the state have long been in decline. In 1991, the federal government declared the first species of salmon in the Pacific Northwest, the Snake River sockeye, to be endangered. Since that time, 18 varieties of salmonid and salmon in Washington have been declared threatened or endangered. The decline of salmon isn’t isolated, and like all organisms, salmon are connected to larger ecosystems that affect and are affected by them.

Traditionally, Washington state has been home to both commercial and sport fishing for salmon. Salmon are also a key ingredient to the marine and freshwater ecosystems. The Columbia River Inter-tribal Fish Commission points out the long history of cultural importance of salmon to native groups in the Pacific Northwest. Today, salmon is still used as an important part of ceremonies, and the fish are also of course still important sources of food.

The annual return of migrating salmon is still cause for celebration. Wild Salmon Center reports that salmon are also the foundation of animal life in river ecosystems. Throughout the United States, salmon give food to bears, seals and orcas. Salmon are also important sources of nutrition for plants growing along stream banks. In Alaska spawning salmon provide up to 25% of the nitrogen in trees and other forest plants in the spawning area. NOAA reports that endangered Southern Resident Killer Whales feed primarily on Chinook Salmon. The orcas visit the mouths of the Columbia, Snake, Klamath and Sacramento Rivers in search of their favorite salmon prey. The decline of salmon in Washington is a factor in the decline of the killer whales as well. The potential fate of two iconic Pacific northwestern animals has pushed Washington state salmon recovery programs.

Habitat restoration, like removing dikes and culverts and blocking migrations on some rivers, has helped. But The Seattle Times reports that salmon are still declining. Official reports show some improvement in localized salmon populations but also declines.

These worrying numbers suggest that more must be done. Part of the problem is that as fast as habitat is restored, other habitat is damaged. Over the last decade, salmon recovery efforts have only received 16% of funding estimated to be required for salmon habitat restoration. Urban development has taken a huge toll as well. Up to 90% of coho salmon in the urban Puget sound watershed have died from toxic storm water run off before they could even spawn. With almost a billion dollars spent in 20 years of work, the salmon are still in trouble. It’s stark realities like these that have pitted the interests of the wheat farmers against what’s best for the salmon and the endangered orcas that eat them.

Washington State’s operating budget passed earlier this year with $750,000 for a ‘stakeholder group’ to be formed to look at the consequences of removing or altering dams on the lower Snake River, Oregon Public Broadcast reported. Critics of the move note that the federal government is already undergoing a review process looking at removing the dams. Supporters feel that this will allow Washington residents to have a say in proceedings.

The removal of dams on the Snake River would undoubtedly benefit salmon. At the moment, salmon are loaded onto trucks and driven past dams only to be released back into the river upstream where they continue to make their way to ancestral spawning grounds. Meanwhile, barges with wheat occupy the river. Some argue that tax payer dollars could be used in a better way to help wheat farmers by improving road and railroad infrastructure and opening rivers for salmon.

Previously, plans have been made to make dams safer for salmon and allow the fish to swim past these obstacles. The federal agencies managing dams on the Snake and Columbia Rivers have lost five lawsuits over their plans for protecting salmon.

The plans for salmon protection are called a Biological Opinion (BiOp). The BiOp for the dams has changed several times, under Presidents Clinton, George W. Bush and Obama. The lawsuit against the federal government’s 2014 BiOp was brought by conservation organizations, the Nez Perce Tribe, and the state of Oregon, according to Oregon Public Broadcasting. The continued failure of the federal government to defend its salmon protection plan in light of federal law, including the Endangered Species Act, makes dam removal one of the few options left open.

For the salmon, the situation is already dire. Natural Resource Defense Coalition reports that in the 1950s, there were as many as 130,000 salmon that swam up the Snake River to spawn. In 2017, there were less than 10,000 salmon spawning in the same river. Trucking salmon hasn’t seemed to work, but returning the river to a more natural state, simply allowing salmon to act as salmon, is perhaps the best option.